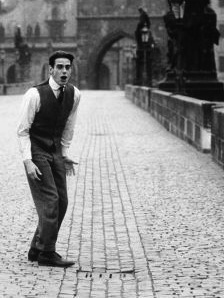 
Living the nightmare that is reality


Kafkaesque. According to the online Urban Dictionary, the word "describes a nightmarish situation which most people can somehow relate to, although strongly surreal. With an ethereal, 'evil', omnipotent power floating just beyond the senses." Kafkaesque is the word that comes to mind to describe the week since Wednesday, January 7, when two masked gunmen murdered 12 people in the offices of a relatively obscure French satirical magazine, Charlie Hebdo. The next day, a policeman in a Paris suburb and, on January 9, four more persons died during a hostage taking in a kosher supermarket. Sunday, some 40 world leaders joined an estimated two million French citizens in Paris for a rally of national unity. The phrase "je suis Charlie" entered the language, with the issue of press freedom front and centre. Something nightmarishly complex had been reduced to a slogan (one that many thoughtful journalists resisted, citing Charlie Hebdo's unsavoury history). Questions were raised about the attack itself, with some commentators declaring it a "false-flag operation" perpetrated to shore up support for the official "war on terror" narrative. Rational response was made all the more difficult by the surreal, implied evil at work as the days went by. Our 21st century has become chillingly like the Prague envisioned by director Steven Soderbergh in his 1992 biographical mystery-thriller, Kafka.

Monday, February 10, 1992.
KAFKA. Written by Lem Dobbs. Based on the life and writings of Franz Kafka (1883-1924). Music by Cliff Martinez. Directed by Steven Soderbergh. Running time: 98 minutes.Rated Mature with the B.C. Classifier's warning: "some violence, occasional nudity." IT'S NOT DULL.
Contrary to appearances, writing is a dynamic art. The life of the mind is an active process, a constant adventure as ideas challenge one another, stimulate emotions, inflame passions or chill the blood.
If it's not visual, blame the picture-makers.
"The problem is always the same," writer-director David Cronenberg says in the just- published Cronenberg On Cronenberg (Knopf Canada). "The act of writing is not very interesting cinematically.
"It's a guy, sitting . . . It's an interior act. In order to really convey the experience of writing to someone who hasn't written, you have to be outrageous."
Interior acts were never a problem for Ken Russell. The godfather of cinematic outrage, he pioneered the modern biographical fantasy, blending artists and their works in breathtakingly unhinged dramatic speculations upon the relationship between art and reality.
Never dull, his Gothic (1986), Mahler (1974), and Lizstomania (1986), foreshadowed Cronenberg's own brain-bending Naked Lunch (1991). The same dare-to-be-brilliant energy crackles through Steven Soderbergh's Kafka.
Call it "a fictional meditation on the themes Franz Kafka explored in his writing," the Sex, Lies and Videotape director suggests with proper dramatic solemnity.
"I wanted to write an expressionistic horror film," screenwriter Lem Dobbs says. Try to picture a cross between Night of the Living Dead and The Third Man.
Jeremy Irons, who starred in the 1988 Cronenberg feature Dead Ringers, has the title role. By day, his Kafka is a cog in the machinery of The Workers Accident and Insurance Compensation Association, "continually harassed by petty tyrants and writing useless reports."
By night, he writes stories for publication in little-read journals. When his friend and fellow clerk Eduard Rabin (Vladimir Gut) disappears, Kafka's separate realities blend together.
Of the historic Kafka's influence, there can be no doubt. His name is in the dictionary. "Kafkaesque" means "surreal, nightmarish, bafflingly complex."
By contrast, Soderbergh's Kafka is mercifully, well, cinematic. Filmed on location in Prague, it is a solvable, if outlandishly moody, mystery-thriller.
Set in period — the year is 1919 — and shot in evocative black and white, it has its troubled Kafka discovering Rabin's double life and being approached by the missing man's lover, off-hours anarchist Gabriela Rossman (Theresa Russell).
Her version of reality disappoints the imaginative Kafka. "So that's who the enemy is," he says sadly. "Policemen and file clerks: Law and order."
He could come up with a better story than that. So can Soderbergh, offering his own solidly Hollywoodland definition of "Kafkaesque."
Combining a first-rate cast with his own mass-market vision, Soderbergh once again proves that intensely-felt ideas can take on a life of their own.

Afterword: Born on this day (January 14) in 1963, Steven Soderbergh is credited (by film historian Peter Biskind) with inspiring the independent film boom of the 1990s. His debut feature, 1989's Sex, Lies and Videotape, caught the zeitgeist with its tale of self-involving technology, and earned him the Palme d'Or at the Cannes Film Festival, as well as an Oscar nomination for its screenplay. Demonstrating the breadth of his ambition, he took on the period tale Kafka as his second theatrical feature. Idiosyncratic within the established system, his creative strategy has involved moving between original, even experimental features, and directing remakes of proven properties. On the original side of his ledger are such pictures as the non-linear comedy Schizopolis (1996), that starred Soderbergh and his then-wife Betsy Brantly; the crime comedy Out of Sight (1998), his first feature with George Clooney; the character-driven drama The Limey (1999), in which he repurposed footage from the 1967 British film Poor Cow; the two-part biopic Che (2008), with Benicio del Toro in the title role, designed to be viewed as a four-hour double feature;  and The Girlfriend Experience (2009), in which he cast adult-film actress Sasha Grey. The best known of his remakes was the ensemble-cast caper comedy Ocean's Eleven (2001), with George Clooney as con artist Danny Ocean. Based on the 1960 original, it has since generated two sequels: Ocean's Twelve (2004) and Ocean's Thirteen (2007); In a very different mood, Clooney starred in Soderbergh's remake of the cerebral Russian science-fiction fantasy Solaris (2002). Soderbergh's dual tracks met in 2000, when he received two best-director Oscar nominations. Though an also-ran for his biopic of social activist Erin Brockovich, based on an original screenplay, he won for his sprawling crime drama Traffic, the remake of a British TV miniseries. Currently, he is the producer-director of the TV hospital drama The Knick, a period piece examining medical practice circa 1900.