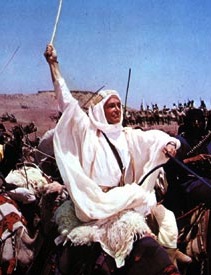 To Aqaba, and beyond!


In a dispatch filed June 13, three days after ISIL fighters captured Iraq's second-largest city Mosul, Robert Fisk reported that one Middle Eastern leader believes that "Sykes-Picot is dead." Who? What?. Fisk, a veteran foreign correspondent for Britain's The Independent newspaper, went on to explain that "the entire Middle East has been haunted by the (1916) Sykes-Picot agreement." It redrew the map, carving up the defeated Ottoman Empire to serve the interests of the British and French Empires at the end of the First World War. At the time, it was opposed by no less a figure than T.E. Lawrence, famous for organizing an Arab army to fight the Turks. During the war, in an attempt to undermine Sykes-Picot, he led his Arabs in a race to capture Damascus, where he urged them to declare an independent state. It was on this day (July 6) in 1917 that his Arab army won its first major victory, taking the Red Sea port city of Aqaba. A month later, Lawrence wrote that "we are calling them to fight for us on a lie.” At the 1919 Paris Peace Conference, he argued with allied leaders Woodrow Wilson, David Lloyd George, and Georges Clemenceau against Sykes-Picot, as well as face to face with King George V at Buckingham Palace. The war that Lawrence fought (and, in his own opinion, lost) is the story told in director David Lean's 1962 epic Lawrence of Arabia.

Friday, March 17, 1989.
LAWRENCE OF ARABIA. Written by Robert Bolt, based on T.E. Lawrence's autobiography The Seven Pillars of Wisdom (1922). Music by Maurice Jarre. Directed by David Lean. Running time: 222 minutes. Mature entertainment with the B.C. Classifier's warning: some violence. NOW THEY TELL US.
After 27 years, Columbia Pictures is owning up to the fact that the Lawrence of Arabia that you saw in 1963 was not the film that won seven Academy Awards, including best picture.
"Almost immediately after its opening,'' says a studio publicist, "(it) was cut from 222 minutes to 202 minutes . . . In late 1970, the film was again cut by an additional 15 minutes (to a 187-minute length) for reissue."
It's much too late for you to claim a refund at the box office, of course.
Instead, Columbia president Dawn Steel is hoping that you'll come to see the new, refurbished, restored, reinstated and repaired ''director's cut,'' the 222-minute movie that David Lean wanted you to see in the first place.
And so you should.
A one-of-a-kind epic, Lean's vast, gloriously conceived adventure is a great, guileless celebration of heroic individualism.
A bewitching combination of cinematic overstatement and gentlemanly ambiguity, it fills the eye and delights the ear, first with Maurice Jarre's lushly romantic symphonic score, and throughout with Robert Bolt's sure, literate dialogue.
Based on Lawrence's autobiographical history, The Seven Pillars of Wisdom, Lean's picture chronicles the First World War service of Lieutenant, later Colonel, Thomas Edward Lawrence, the archeologist-turned-intelligence officer who led Prince Feisal's Bedouin army against the Turkish forces in the Middle East.
Lawrence, the bastard son of an impoverished Irish baronet, was the stuff of legends. An obscure cartographer serving in Cairo, he seized an  historic moment and gained (unwanted) international celebrity.
An arabist, he tried to persuade hostile tribesmen that they shared a destiny as a united people. In the robes of a sherif, he fought with them and for them.
Lean, the craftsman-like director for whom revolution and culture clash became a leitmotif in such later films as Doctor Zhivago (1965) and A Passage to India (1984), found his own larger-than-life Lawrence on the London stage.
His picture introduced audiences to Peter O'Toole, an actor with a riveting presence and some overblown, mystic mannerisms.
Perhaps aware that he could not solve the "mystery'' of Lawrence, Lean doesn't even try. Instead, he shows people's reactions to his occasionally insufferable hero.
Among those effectively portrayed are a scheming Prince Feisal (Alec Guinness), a devious Gen. Allenby (Jack Hawkins), a proper Col. Brighton (Anthony Quayle) and a cynical British intelligence operative name Dryden (Claude Rains).
Lawrence gains notoriety via the dispaches of an ambitious Chicago newspaperman named Bentley (Arthur Kennedy). His regional associates include a jaded Turkish Bey (Jose Ferrer), an earthy Sheikh Auda Abu Tayi (Anthony Quinn) and an idealistic Sherif Ali Ibn el Kharish (Omar Sharif).
His story makes for a full evening's movie outing.

Afterword: When it was first released in 1962, Lawrence of Arabia was greeted as a great, rousing adventure, an example of epic film-making at its best. The picture made a star of Peter O'Toole and won seven of the ten Oscars for which it was nominated. When it was rereleased in 1989, the emphasis was on its status as a film classic, the bigger, better film that had to be seen because it was so famous for being famous. Now it stands as a primer for understanding today's most explosive headlines. When, on June 31, 2014, the military insurgency calling itself the Islamic State of Iraq and the Levant (ISIL) declared the lands under its control a "caliphate," it was, arguably, answering Lawrence's 95-year-old call for an independent Arab state. Granted, ISIL was hardly what Lawrence had in mind, but he would have recognized its fundamentalist fanaticism as the natural result of the serial betrayals visited upon the region and its peoples by successive foreign empire builders. Though neither a documentary nor a model of factual accuracy, Lean's film captures the essential truths of its time and place, qualities central to understanding the dynamics of history. As for Sykes-Picot, here's a hyperlink to the scene in which the Arab Bureau's spymaster, Mr. Dryden (Claude Rains), explains the Anglo-French agreement to Col. Lawrence (Peter O'Toole).