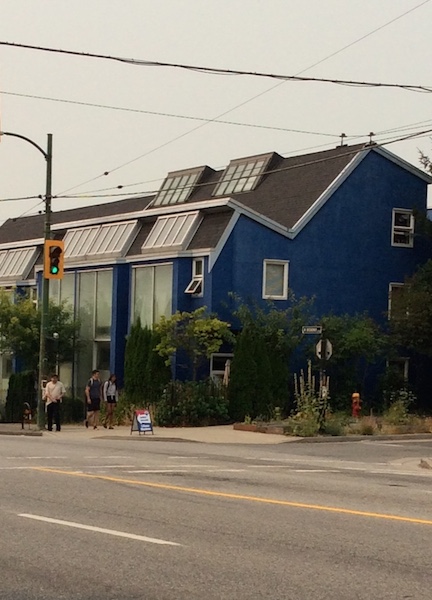 Still standing on the northwest corner of Broadway and Vine on August 5, 2017 is the Kitsilano Solar House.


Finding something new under the sun


On this day (August 6) in 1980, about 1,000 sun-power enthusiasts gathered at the University of B.C. for a scientific conference called “Forging the Solar Future.” Screened for the delegates was a Vancouver-made documentary celebrating the newly-built Kitsilano Solar House.

KITSILANO SOLAR HOUSE. Written by David Morton. Music by Michael Clark. Directed by Jacques Khouri and and Chris Gallagher. Excerpt footage from Energy from the Sun (1955). Running time: 21 minutes. THE CENTRAL MORTGAGE AND Housing people don't know what to make of Jacques Khouri. Yes, he's been a real-estate agent and yes, he's a bona fide land developer.
But he's also a community organizer, one of the leaders in the fight against high-rises in Vancouver’s Kitsilano neighbourhood. Then, one day, he turns up looking for money for a solar-heated housing co-op in the same district.
Didn’t he know about Vancouver?
The long-range forecast calls for rain, not sunshine. The CMHA turned him down.
Khouri wasn't discouraged. An activist-entrepreneur, he knocked on the door of Canada’s National Research Council.
The federal science agency was already putting money into solar projects in Ontario and Quebec. Khouri turned on the charm and told them that “you’ve got to fund a project on the West Coast, too.”
Intrigued by his design and swayed by his arguments, the NRC agreed to put up $89,000, a grant made for “a demonstration of a passive solar system.” The CMHA fell in line soon afterwards, loaning the Kitsilano Housing Society the money it needed to build an eight-unit, resident owned and controlled apartment co-operative on the northwest corner of Broadway and Vine.
Kitsilano Solar House is the story of that building. Khouri, convinced that its construction was an event worth recording, tried to interest the National Film Board in the project. When the Board demurred, he decided that it was time to become his own film producer.
"Originally, I wanted to make a film about the politics of solar energy," he says. "What I ended up with was a how-to film."
A finely-tuned documentary, Kitsilano Solar House immediately puts the local building project into an international context. From an opening shot of sunbathers on Kits Beach, it cuts to a view of ships riding at anchor in English Bay, and we hear that "the word from OPEC is . . . “
A brief look at the 11,000 degrees Fahrenheit surface of the sun, a recollection of ancient sun worship and a return to the beach are followed by narrator Michael Halleran’s suggestion that there is "a different way.”
The solar alternative isn’t as new as we think, Khouri says. Research for his film, co-directed by Chris Gallagher and written by David Morton, discovered a 1955 Encyclopedia Britannica short called Energy from the Sun. A clip from the earlier black-and-white film shows a man designing a solar house.
Architect Klaus Schmidt collaborated with solar consultant Chris Mattock on the design for the Kitsilano project. Diagrams are used in the film to explain the basic principles by which walls, floors and water are heated in their house,
We see the building going up, being outfitted, and finally being lived in. A British Columbia Hydro representative considers the results and concedes that “the passive elements (are) mostly cost effective.” The average monthly Hydro bill per unit to date [1980]: $20.
*    *    *
On August 6 through 11 [1980], the University of B.C. will play host to a conference of about 1,000 sun-power enthusiasts. Called "Forging the Solar Transition,” it is being jointly sponsored by the Pacific Northwest Solar Energy Association, the Solar Energy Society of Canada and the International Solar Energy Society.
Kitsilano Solar House, viewed recently by the conference’s public workshops co-ordinator David Smith, will be a featured part of the program. Conference details are available from the Solar Energy Society of Canada,  504 Davie St, Vancouver.

Afterword: By the time he produced Kitsilano Solar House, Israeli-born University of British Columbia graduate Jacques Khouri was well known as a media-savvy community organizer.  He’d already put in a year as a business reporter for the The Vancouver Sun, nearly three-and-a-half years as an information officer for the federal government’s Local Initiatives Program and five years in local radio. Khouri’s detour into film direction was brief, and his professional focus remained the development of non-profit co-operative housing in Vancouver. In the years since, he has served as president of  the B.C. Real Estate Board, as CEO of Vancity Enterprises and as a member of Vancouver’s Economic Development Commission. In his spare time, “Jaco” Khouri plays bass guitar in a number of local jazz, gypsy klezmer, R&B and Western swing bands.
Chris Gallagher was an established member of Vancouver’s experimental arts community when Khouri commissioned him to co-produce and direct Kitsilano Solar House. Described as “a playful structuralist,” he was a photographer, moviemaker and, as it turned out, the brother of my Province newspaper colleague, sportswriter Tony Gallagher. For Chris, the collaboration with Khouri represented a detour into formal documentary, after which he returned to the experimental cinema scene, making films that have been honoured in galleries around the world. In 1988, Gallagher became a member of the UBC faculty, where he taught film and video production until his retirement in December, 2016.
Although passive solar houses have yet to become a major building trend, the one in Kitisilano — Canada’s first — remains to be seen (and photographed). It’s part of a neighbourhood that continues to resist high-rise developments, despite much commercial and political pressure to do otherwise.