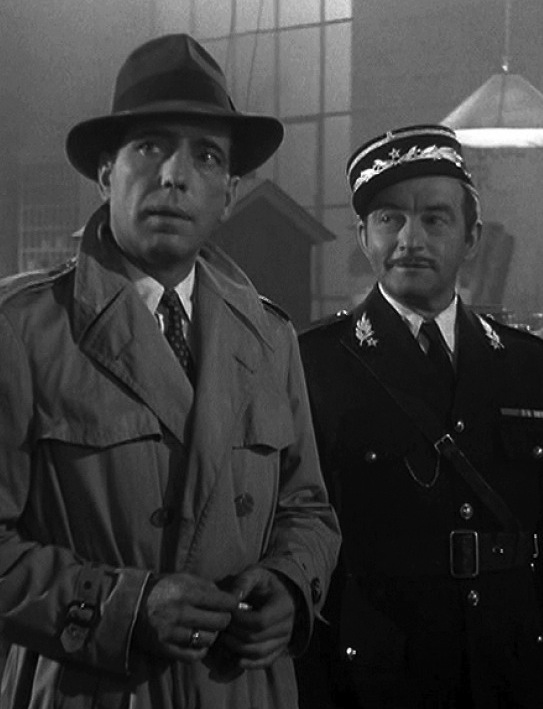 
Making the best of black and white choices


Listen very carefully; I shall say this only once. It was on this day (Jan. 13) in 1943 that U.S. President Franklin Roosevelt was away from his desk in Washington. The day before, in a radio address to the nation, Roosevelt had announced that the U.S. would demand the "unconditional surrender" of its Second World War enemies, Germany and Japan. The day after, he sat down in Morocco with his friend and ally Winston Churchill to begin their Casablanca Conference. His surrender policy announcement blindsided Churchill, who preferred the option of a negotiated settlement, but the British leader made nice because, well, he had to. In Hollywood, meanwhile, the film-making Warner Brothers accepted all the front-page coverage of the meeting as a film-promoting gift. Seven weeks earlier, they had premiered a movie called Casablanca in New York, taking advantage of the news of the November 11 Allied invasion of French North Africa. The film's general release was on the studio's spring schedule. In mid-January, Warners seized the moment again, and opened nation-wide on January 23. That means there's no really good reason for Reeling Back to recall the movie on this particular day. So, we're going to do it because BJA said it was his favourite film.

Friday, May 8, 1992.
CASABLANCA. Written by Julius J. Epstein, Philip G. Epstein and Howard Koch. Based on the stage play Everybody Goes to Rick's by Murray Burnett and Joan Alison. Music by Max Steiner. Directed by Michael Curtiz. Running time: 102 minutes. General entertainment. YOU MUST REMEMBER this . . .
Casablanca. Bogart and Bergman. La Marseillaise and As Time Goes By.
Moonlight and love songs, never out of date . . .
OK. Just take a deep breath and relax.
We're in the presence of an entertainment classic. Everybody who goes to Rick's knows that it all comes together in the perfect Hollywood movie.
Critics acknowledge its flawless craft. In his 1981 book Cult Movies, Dan Peary notes that "it contains almost every element that would appear on an audience checklist: "Action, adventure, bravery, danger, espionage, exotic locale, friendship, gunplay, humour, intrigue, a love triangle, a masculine hero, a mysterious heroine, patriotism, politics (without being too political), romance, sentimentality, a theme song, a time factor, a venomous villain, and war."
All these are in the story of Richard Blaine (Humphrey Bogart), the disillusioned American adventurer who, in December, 1941, is running a gin joint in unoccupied French Morocco. He survives and prospers because "I stick my neck out for nobody."
Rick's past becomes present when Ilsa Lund (Ingrid Bergman) arrives. His ex-lover, she is on the run from the Nazis with her husband, legendary European resistance leader Victor Laszlo (Paul Henreid).
Pressuring local prefect of police Louis Renault (Claude Rains) to detain the Laszlos is German Major Heinrich Strasser (Conrad Veidt). Pressuring Rick to help them is the radiant Ilsa.
Its timing was just right, the casting perfect and Max Steiner's music superb. Under the unerringly professional direction of Michael Curtiz, Casablanca was an all-American assembly-line masterpiece.
Its immediate success was validated with 1942's best picture Oscar (though it actually premiered on November 26, 1941). Its continued popularity has won it classic status.
Remarkably, Casablanca's overall impact remains undiminished by time or circumstances. See it today and you realize that Rick faces the archetypal hero's "catch-22."
Once lovers, Rick and Ilsa remain in love. Emotionally torn, she comes to him on the verge of collapse. "I don't know what's right any longer," she sighs."You'll have to think for both of us. For all of us."
Rick knows what's right. His dilemma is that if he gives in to his own desire, he will no longer be the man that Ilsa really loves. If he insists that she stand by her man, Laszlo, she will continue to love him.
See Casablanca today and you see a picture that speaks to our need for leaders. Watch "poor corrupt official" Louis Renault and you realize that he really wants to be a better man than he is. (Don't we all?)
The fact that Rick was once much better, and is now a fallen soul, serves as an excuse for slick Louis. Even so, he'd prefer Rick as an example, a call to his own suppressed decency.
There are those who argue that Casablanca is not, strictly speaking, great art.
Perhaps not. But it's what we all like.
Rated General, Casablanca opens today for an engagement to mark its 50th anniversary at the Varsity Theatre.

Afterword: The last time I looked, the Internet Movie Database (IMDb) offered links to 218 external reviews of Casablanca. You could fill a book just listing the references to the film in other books about the movies and movie business. Before there were videocassettes, a film enthusiast named Richard J. Anobile produced a mass-market edition of Casablanca (1974) in book form that offered "over 1,500 frame blow-ups; every scene; every word of dialogue." The 1992 50th anniversary was accompanied by such books as Turner Classics' Casablanca: As Time Goes By, Harlan Lebo's Casablanca: Behind the Scenes, Jeff Siegel's The Casablanca Companion and Aljean Harmetz's exhaustive Round up the Usual Suspects: The Making of Casablanca — Bogart, Bergman & World War II. Then there is As Time Goes By (a book I plan to read someday), a 1998 novel written as a "sequel" to Casablanca by an American author improbably named Michael Walsh. T