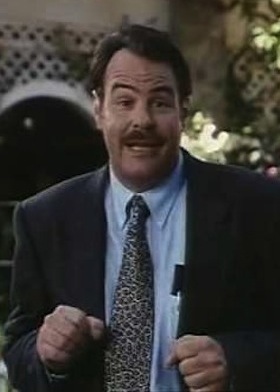 Det. Fred Lavery (Dan Aykroyd) is torn between enforcing the law and getting in touch with his feelings in director Garry Marshall's Exit to Eden.

a bomb banned in biggar


Saskatchewan says no to S&M comedy


The free-loving 1960s were but a memory. The era of sex-drugs-and-rock'n'roll had been replaced by corporate-spokesmodel-turned-President Ronald Reagan's "morning in America." If the 1980s had any motto, it was the one spoken by corporate raider Gordon Gekko (Michael Douglas) in 1987's Wall Street: "Greed is good!" Some say the 80s ended with the 1990 tearing down of the Berlin Wall, or the 1991 collapse of the Soviet Union. Others argue that it came on this day (Feb. 22) in 1989, with the release of Finland's landmark "sex holiday" report. Headlines around the world resulted from the government's Advisory Committee for Health Education proposal that such vacations be encouraged by the state to alleviate stress. The idea was quickly blessed by Liisa Tuovinen, then secretary of the Lutheran Church's board of family affairs in Helsinki. "We know how much it means for people to get a chance to retreat from their everyday lives and to get the time to be together," she told the Reuters news agency. The very next day, the death of U.S. whirlpool-pump manufacturer Aldo Joseph Jacuzzi reminded people of the preciousness of time spent together in really big bathtubs. Prepared to enjoy a good, healthy, dirty movie, audiences were blindsided in 1994 by Exit to Eden.

Sunday, October 16, 1994.
EXIT TO EDEN. Written by Deborah Amelon and Bob Brunner. Based on the 1985 novel by Anne Rice (writing as Anne Rampling). Music by Patrick Doyle. Co-produced and directed by Garry Marshall. Running time: 114 minutes. Restricted entertainment with the B.C. Classifier's warning "frequent nudity, some suggestive scenes and language, occasional very coarse language." PRAIRIE FOLK KNOW a cow patty when they see one.
Last week's decision by the Saskatchewan Film Classification Board to ban Exit to Eden was a refreshingly honest expression of individual revulsion. Regina officials, knowing full well that their action would be reversed upon appeal, had the courage to stand up and publicly hold their noses.
Though cinema sophisticates laughed — Banned in Biggar! Hyuk, hyuk! — Saskatchewan spoke the truth. Director Garry Marshall's slick new smut fest stinks.
Based on pseudonymous pornographer Anne Rice's 1985 novel (originally credited to "Anne Rampling"), the film offers itself as a cute, adult comedy about a lot of fit, attractive, fun-loving people who like sunshine, theme-park-like resort living and leather. Happy campers all, they play intimate games with one another.
A first-person account by Lisa, a professional dominatrix, and Elliot, the troubled photojournalist who shares her fantasies, Rice's book was Sadomasochistic erotica in the tradition of The Story of O. It was the author's philosophical response to her own inner demons and the socio-political mess in greater Reaganland.
Marshall's movie adaptation opens with Elliot (Paul Mercurio) being screened for admission to "Eden." Located on a privately-owned island off Mexico, it is a clothes-optional, inhibitions-free zone promising "an environment free of disease or violence."
Says Elliot to millionaire sex guru Martin Halifax (Hector Elizondo): "I'm not always honest with myself about what I want."
Let's be entirely honest about what Marshall wants. To maximize his earnings, the dirty movie-maker needs to sell his leather fetish fantasies not to the shadow world of porno-art fanciers, but to the shopping mall cinema crowd that bought his degenerate 1990 comedy, Pretty Woman.
To make Rice's netherworld novel "accessible to general audiences," he folded its story into an entirely new action comedy plot involving a pair of ultra-straight cops and two ruthless jewel robbers. The deviant sex theme is reduced to some mild, entirely consensual bondage and domination — S&M lite.
Marshall's strategy involved casting principal players with name recognition and favourable reputations in middle America — the likeable Dan Aykroyd and Rosie O'Donnell — as cops, along with the sweet pairing of Mercurio and Dana Delany as Lisa.
"I didn't know such a world existed," wide-eyed, stark-naked Lisa says during a flashback to her own initiation to domination.
Guess what, kids? It doesn't.
At least not in the form presented in this irresponsible, intellectually smarmy, commercially opportunistic feature. Like Philip (Rising Sun) Kaufman, Marshall has the makings of a great pornographer.
Now, if he could just get in touch with his feelings.

Afterword: Although the Saskatchewan ban made headlines worldwide, the publicity did not translate into dollars at the box office. For their own reasons, filmgoers preferred Anne Rice's vampires to her vamps, and the Exit to Eden feature was a major financial failure. I should make it clear that the above review was written tongue-in-cheek, with no disrespect for the people of Saskatchewan. The town of Biggar (population: 2,161 when it celebrated its centenary in 2011), is known for its sense of humour. (The municipality's motto is "New York Is Big, But This Is Biggar.") As predicted in my review, the ban was almost immediately reversed and the picture was released in Saskatchewan one week later than the rest of Canada. In 1994, regular readers were well aware of my personal opposition to film censorship. Of course director Garry Marshall had every right to make a dirty movie. I only wish he'd made a good one.