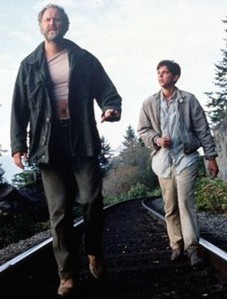 
Torn between fairness and popularity


Actor Ralph Macchio made his breakthrough to stardom in 1984’s The Karate Kid and played the title role in its 1986 and 1989 sequels. Born on this day (November 4) in 1961, he made a working visit to B.C. to co-star in director Rick Rosenthal’s 1988 drama Distant Thunder

DISTANT THUNDER. Written by Robert Stitzel. Music by Maurice Jarre. Directed by Rick Rosenthal.  Running time: 112 minutes. 14 Years Limited Admission with the B.C. Classifier’s warning: some very coarse language. THERE ONCE WAS A TIME when Rambo had buddies. Before he became a symbol, a political statement and a killing machine every bit as unstoppable as a horror film phantom, John Rambo was just another Vietnam vet with readjustment problems.
When we met him in 1982’s First Blood, he was looking for his buddies. The film opened with Rambo on the road in Washington State in search of a friend.
But for that unpleasantness in a town called Hope, he might have found his way to the Olympic Peninsula. There, he might have met others like himself, “bush vets'' living in the mountains; hard, hollow-eyed men with hearts and minds somewhere back in the Southeast Asian jungle.
Mark Lambert (John Lithgow) is one such man. His story, Distant Thunder, begins at twilight. A subtitle tells us we are in “North Vietnam, 1969.”
A member of the U.S. Navy’s elite special operations force, the SEALs, Lambert fought a secret, unconventional war north of the DMZ. He returned broken in spirit, a man hiding from society and himself in the Northwest rain forest (filmed on location in and around Squamish, B.C.).
In 1988, his past will intrude, finally, on his isolation. Jack (Ralph Macchio), the son he hasn’t seen in 15 years, is coming to find his father.
Bush vets are real. During the development of the Distant Thunder script, screenwriter Robert Stitzel visited with them in Port Angeles.
Something of their pain is reflected in actor Lithgow’s anguished performance. As Lambert, he gives life to the story of a vet who comes down from his mountain eyrie when one of his buddies commits suicide.
Taking a job with a local logging company, he is befriended by a young woman sensitive to his plight. “I lost my dad in Vietnam,’’ Char Webster (Kerrie Keene) tells him by way of an explanation.
He understands. He accepts her advice that he write to his son.
Not so understanding is Moss (Jamey Sheridan), Char's sometimes boyfriend.
Moss’s resentment of the gentle, potentially violent Lambert leads to a series of progressively deadly confrontations. Ultimately, violence flares up in the depths of the forest.
Director Rick Rosenthal wants to be taken seriously. Though he made his debut with a truly nasty shock feature —1981’s Halloween II — he recovered nicely with the Sean Penn reform school drama Bad Boys (1983).
With Distant Thunder, his restrained, at times awkward examination of post-traumatic stress disorder (PTSD), he manages  to demonstrate his continued sincerity. At the same time, he seems ill at ease with a demanding, difficult subject.
A commercial filmmaker, Rosenthal may well be aware that his drama was fated to fall somewhere between the crowd-pleasing blood and thunder of Rambo’s rampages and the less attractive aspects of a clinical documentary. The strain shows in a feature that wants both to play fair and be popular.
Erring on the side of the real bush vets, his Distant Thunder offers audiences a glimpse of an authentic American tragedy.

Afterword: The damage is real. Known by various names during the 20th century — shell shock, battle fatigue, combat stress reaction — PTSD entered the language in the 1970s in the aftermath of America’s Vietnam war. It’s effects were the subject of two major motion pictures in 1978: director Michael Cimino’s The Deer Hunter (winner of the best picture and director Academy Awards) and Hal Ashby’s Coming Home (starring best actor and actress winners Jon Voight and Jane Fonda). Also released in 1978 was John Carpenter’s Halloween, the movie credited with launching a new age of Hollywood horror films.
Among popular culture scholars, there are those who argue that Halloween’s serial killer Michael Meyers and his franchise feature film buddies Jason Voorhees (Friday the 13th) and Freddy Krueger (A Nightmare on Elm Street) are metaphors for the continuing social damage that PTSD represents. Harvard graduate Rick Rosenthal seems to have been aware of the connection when he made his directorial debut with 1981’s Halloween II. As noted in the above review, he tackled the subject directly in his fifth feature, Distant Thunder. A critical success, the picture nevertheless bombed at the box office, and most of Rosenthal’s subsequent career has been in television. In 2002, he returned to the big screen (and to Vancouver locations) with Halloween: Resurrection, the eighth film in the unstoppable franchise.
As a Directors Guild of Canada “International Member,” Rosenthal has a long list of television credits north of the border, including work in Halifax (Haven; 2010), in Toronto (the 1992 made-for-TV movie Devlin, as well as episodes of Falcone and DC in1999; Witchblade in 2002; The Dresden Files in 2007; Being Erica in 2009-10; and Beauty and the Beast in 2012) and in Vancouver (Tru Calling in 2004; Smallville in 2003-08; Reunion in 2005-06; and Flash Gordon in 2007).
Although Ralph Macchio had starring roles in director John G. Avildsen’s three Karate Kid features (1984, 1986 and 1989), and Walter Hill’s bluesy musical drama Crossroads (1986), the Long Island-born actor's performing career since then has been as a feature film supporting player and television series guest star. It’s said that what goes around comes around, and early last month (October 8), Macchio reported for duty on the set of Cobra Kai  in Atlanta, Georgia. Scheduled for 2018 release on the You Tube Red streaming service, the 10-episode series is designed to continue the story of The Karate Kid into the present day. Its plot reunites Macchio’s Danny LaRusso character with his old rival Johnny Lawrence, played by William Zabka. Ralph Macchio celebrates his 56th birthday today (November 4).