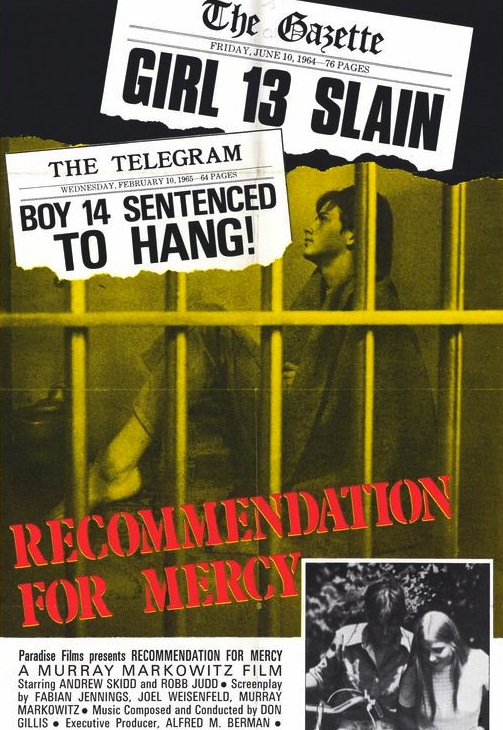 A demand for justice


On this day (January 22) in 1960, the death sentence imposed on 14-year-old Steven Truscott was commuted to life imprisonment. A notorious miscarriage of justice, Truscott's ordeal inspired director Murray Markowitz's fictional dramatization of this case, 1975's Recommendation for Mercy.

Tuesday, December 16, 1975.
RECOMMENDATION FOR MERCY. Co-written by Fabien Jennings and Joe Wiesenfeld. Music by Don Gillis. Co-written and directed by Murray Markowitz. Running time: 92 minutes. Mature entertainment with the B.C. Classifier's warning: some nudity and suggested violence. CHILDHOOD. LOVE. DEATH. These are the concerns at the heart of two new Canadian films currently [1975] on view in Vancouver. What's more, both director Murray Markowitz's Recommendation for Mercy and Jan Kadar's Lies My Father Told Me are based on true stories.
The Toronto-born Markowitz was inspired by the ordeal of Steven Truscott. In 1959, the Goderich, Ontario youth was convicted of the rape-murder of a 12-year-old classmate named Cheryl Lynne Harper. He was sentenced to hang.
Truscott was 14.
In his film, Markowitz dares considerably more than the Budapest-born Kadar. His vision of childhood is dark and brooding, a place not of joy, innocence and happy discovery, but a nightmare state that constantly threatens disappointment and disaster.
John Robinson (Andrew Skidd) is at the age when boys begin to notice girls. Sex dominates the discussion among the kids who gather in the local treehouse.
Unbeknownst to them, it is also a favoured topic among the girls.
Despite this, there is a delicate innocence about John's affection for a girl named Fran Bailey (Michelle Fansett). Then their separate fantasy worlds explode.
Fran's body is found in the woods. The evidence, all of it circumstantial, points to John, the last person seen with her alive.
He goes on trial for her murder.
Daring as his subject matter is, Markowitz manages to blunt its impact with an inconsistent style. It's as if he couldn't decide between a straight documentary dramatization of the still-controversial Truscott case, or a suspense thriller with a fictionalized, Truscott-like plot.
On one hand, his film contains flashbacks and fantasy sequences that would be out of place in a documentary. On the other, cameraman Richard Leiterman's harshly-lit newsreel technique creates the wrong atmosphere for an effective thriller.
This vacillation is all the more unfortunate since Markowitz has genuine skill directing actors. His film is full of fine, understated performances from children and adults alike.
Despite the court's finding, Recommendation for Mercy argues for the defence.

Afterword: At the time of the film's release, Steven Truscott was 30 years old. After the 1960 commutation of his death sentence, he served just under 10 years in prison before being released on parole. If Truscott had an opinion about Markowitz's 1975 feature, it's not easy to find. What is on the record is the fact that he married, fathered three children and maintained his personal privacy while working as a millwright in Guelph, Ontario. Throughout, he asserted his innocence and the hope that someday his conviction would be overturned.
He went public in 2000, cooperating with the CBC's investigative news show the fifth estate in the production of a documentary report questioning the evidence presented against him. "I want to see justice done," he told program host Linden MacIntyre. Seven years later, on August 28, 2007, he was acquitted of all charges. His case was recognized as an historic miscarriage of justice. A year later he received an apology from Ontario's provincial government and $6.5 million in compensation. On Monday (January 18), Steven Truscott marked his 71st birthday.