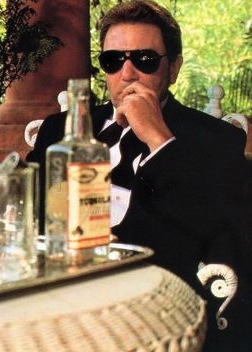 Former British Consul Geoffrey Firmin (Albert Finney) considers his next drink on Mexico's Day of the Dead in Under the Volcano.

a drink before dying


Because Vancouver is located on the Garibaldi Volcanic Belt (part of the larger Pacific Ring of Fire), tomorrow's opening (Feb. 21) of a movie called Pompeii is an attention grabber. Although it's set on the other side of the world and some 2,000 years ago, the fact that it was filmed on a Toronto soundstage and features Vancouver actress Carrie-Anne Moss also caught my eye. Nor can we ignore the rich, if often cheesy, history of cinematic vulcanology that includes three previous features called The Last Days of Pompeii (1913, 1935, 1960). Among the historical highlights is 1969's Krakatoa: East of Java (1969), which is memorable not because it was one of last films released in Cinerama, but because Krakatoa is, in fact, west of Java. When Time Ran Out (1980) was the last in the cycle of all-star disaster films produced by Irwin Allen. Then there was 1990's Joe Versus the Volcano, writer/director John Patrick Shanley's wonderfully surreal romantic comedy starring Tom Hanks and Meg Ryan. The 1980 eruption of Washington State's Mt. St. Helens seems to have inspired dueling 1997 features: Dante's Peak set, logically, in the Cascades, and Volcano, illogically set in downtown Los Angeles. Ignoring them all, Reeling Back prefers to recall John Huston's 1984 feature, Under the Volcano.

Friday, June13, 1984
UNDER THE VOLCANO. Written by Guy Gallo, based on the novel by Malcolm Lowry. Music by Alex North. Directed by John Huston. Running time: 109 minutes. Mature entertainment with the B.C. Classifier's warning: occasional nudity, suggestive scenes, swearing and violence. WHEN WE FIRST see Geoffrey Firmin (Albert Finney), he's drunk. Lurching along in his dinner jacket, the former British Consul is an incongruous sight on the streets of Cuernavaca, a Mexican town located Under the Volcano called Popocatepetl.
All around him the townsfolk are preparing to celebrate the Day of the Dead, a Hallowe'en-like feast. The movie opens with a mood-setting sequence featuring traditional Mexican marionettes, skeletons with clacking jaws. Firmin, it suggests, is a man strung out and moving towards a pre-ordained fate.
Like the moth in the presence of a flame, Firmin is attracted to death and is being borne toward it on a flood of liquor. By all accounts, Firmin was the alter ego of author Malcolm Lowry, a self-destructive writer who set down the story while living in a squatter's shack near Dollarton, on the north shore of Vancouver's Burrard Inlet.
Following its publication in 1947, Under the Volcano was hailed as a work of genius. The movie version, adapted by Guy Gallo, is rather less so.
Under the direction of John Huston, it has become a flat, literal portrait of a man drinking himself to death during the course of a day in 1938. Where the novelist entered into the mind of his protagonist to assay his inner being, the film-maker remains a resolute outsider.
Eschewing such cinematic devices as flashback, dream sequences or voice-over narration, Huston presents Firmin's story as a straight-ahead chronicle of his last hours on earth. Since Firmin never has a chance to sober up, actor Finney's performance, brilliant as it is, has no place to go.
For filmgoers unfamiliar with the Lowry novel, Huston's picaresque approach conveys little sense of high tragedy. As depicted in the film, the problems that have driven a noble soul to drink seem decidedly minor league.
For years the literati have argued that works such as Under the Volcano are unfilmable. Huston's bland binge will do little to shake their faith in that belief.

Afterword: For Albert Finney, Under the Volcano was a milepost on his journey from 1960s stud muffin — he achieved international stardom, and his first Oscar nomination, playing the title role in 1963's best picture winner Tom Jones — to curmudgeons and comic grotesques. The 1984 literary adaptation was his second creative collaboration with director John Huston. In their first, 1982's Annie, he played the comic strip orphan's "Daddy" Warbucks (and sang a duet with Carol Burnett). Yes, Under the Volcano did bring him the fourth of his five best actor nominations. It also made clear that his career trajectory would be very different from that of his British acting contemporary Sean Connery.