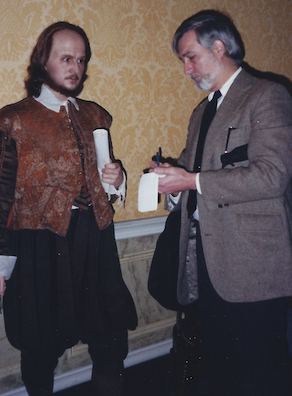 
“So, good night unto you all.” Tonight (September 24), the words of Puck (played by actress Sarah Roa) will bring A Midsummer Night’s Dream, as well as the 2022 season of the Bard on the Beach Festival, to an end. Founded in 1990, the summertime celebration of Shakespeare was much missed during a two-year hiatus brought about by the COVID-19 pandemic. Yet again, I am reminded of the special place Stratford-on-Avon’s favourite son has had in my Vancouver memories since 1971. That year, for eight amazing days, the city played host to the first World Shakespeare Congress, the midsummer dream of Simon Fraser University professor Rudolph Habenicht. Recognizing its importance, The Province offered daily coverage of the proceedings, recalled in this ten-feature Reeling Back package. My reporting of the event began with this comprehensive WSC Preview feature. It includes an overview of how the Congress came to be, along with five themed items looking at its non-academic incidental programming.

With 500 delegates from 30 nations attending, the history-making first World Shakespeare Congress begins here next week [Aug. 20. 1971]. Scholars, critics and dramatists hope to engender a network of international academic co-operation and understanding. The Bard really does live — and, for a week at least, his residence will be Burnaby Mountain instead of Stratford-on-Avon . . .


— MUSIC —
THE LILT OF SHAKESPEARE'S language may be music enough for the confirmed Bard buff, but even antic Hamlet knew that there was more to life than "words, words, words."
For World Shakespeare Congress delegates keen to broaden their appreciation of the playwright's own age, organist Hugh McLean, professor of music at UBC, has arranged a series of luncheon concerts featuring the Vancouver Consort.
Their six half-hour performances will spotlight, on subsequent days, the music of the Low Countries, of France, of Iberia and the New World, of Italy, of Germany and of England, all selections drawn from the century 1530 to 1630.
Set on a somewhat broader base are the three evening concerts. Each will be repeated twice. Among the featured stars are Belgian mezzo-soprano Christine Van Acker, lutenist Michel Podolski, the Hugh McLean Consort, the Hortulani Musicae and the SFU Madrigal Singers.
Two of the evening performances will concentrate on the Elizabethan age, but the third will deal with Shakespeare's influence on contemporary music. Highlight of the program will be the world premiere of Elliot Viesgarber's as-yet unnamed music for Japanese sonnets.
Viesgarber, an expert on Japanese instruments, composed in the Japanese manner a new work based on four of Shakespeare's sonnets. The new work may prove most appropriate. According to congress director Rudie Habenicht, 10 per cent of Congress delegates are coming from Japan.

— FILMS —
HAMLET, THE MALADJUSTED PRINCE of Denmark, is given star billing, but luckless King Lear may just steal the show.
Although the melancholy Dane is featured in seven of the 10 movies that make up the World Shakespeare Congress film program, only Lear can generate the lustre of a major premiere. Made last year [1970] by Soviet film director Grigori Kozintsev, this Russian-language King Lear will make its North American debut at the Congress.
Several years ago, Kozintsev drew prolonged applause from Western film critics with his brilliantly stark Hamlet. A delegate to the Congress, he will be presenting a paper on Hamlet and Lear, Stage and Film.
Aside from that, the film program, arranged by Vancouver Film Society president Pearl Williams, might well have been called “The Many Faces of Hamlet.”
Reaching back into the silent era, Mrs. Williams has managed to find a genuine Danish Hamlet, one that features actress Asta Nielsen in the title role. More recent versions include Sir Laurence Olivier's Oedipal interpretation and Nicol Williamson's strident student rebel.
Short subjects feature the Dane again. Tests stars John Barrymore testing in the part for a film that was never made: Enter Hamlet and Hamlet are a pair of animated featurettes.
Two additional features round out the program. Throne of Blood, starring Toshiro Mifune, is Akira Kurosawa's Japanese adaptation of Macbeth. A Midsummer Night's Dream, combining Shakespeare, Mendelssohn and Max Reinhardt, is culture done in the blockbuster tradition of the old Hollywood studios. Made in 1935, it was a landmark in screen fantasy. Included in the cast were James Cagney, Dick Powell, Joe E. Brown, Victor Jory, Mickey Rooney and, in her screen debut, Olivia De Havilland.


— TECHNOLOGY —
IF ITS TECHNOLOGICAL INNOVATIONS are any indication, the World Shakespeare Congress may lead to a rewiring of academe's ivory tower image.
One proposal before the Congress would send computers all over the world off on a Bard binge. The Bibliographical Automated Retrival Device (BARD), created by SFU's Computer Centre, will make possible the continuous storage and exchange of information among Shakespeareans in every corner of the globe.
Even without BARD, little of what goes on during the Congress will be lost to posterity. If legal complications can be ironed out, the entire Congress may live again and again on video tape. Plans call for all the major gatherings, presentations, panels and committee sessions to be recorded.

— THEATRE —
THE QUESTION MIGHT HAVE been which of Shakespeare's 37 plays should be staged at the first World Shakespeare Congress? The answer, apparently, was none.
Although four events are being held in connection with the congress, not one qualifies as full-blooded Bard. Like the concerts, the theatrics are designed to show Shakespeare's age and influence, rather than his actual work.
Coming from the University of Calgary is Ben Jonson's comedic morality play Every Man in His Humour.
More in the modern manner is UBC's production of Charles Marowitz's Hamlet Collage, a sort of Hamlet happening. The production is likely to raise the question of directorial interpretation, and the Congress takes it up in a two-part theatre colloquium.
Using as his vehicle two scenes from Troilus and Cressida, Basle University's Rudolf Stamm will demonstrate the problems involved in adapting Shakespeare so as to set forth modern political or philosophical points of view.
The event that may top them all for dramatic invention isn't part of the formal theatrical program. It is a 10-member symposium set up to discuss Psychoanalysis and Shakespeare. Ever since psychiatrist Ernest Jones published his eminently readable Hamlet and Oedipus, conventional Shakespeareans have attempted to close ranks against such analysis.

The above is a restored version of a Province Spotlight Magazine feature by Michael Walsh originally published in 1971. For additional information on this archived material, please visit my FAQ.

Afterword: Director Peter Hall, mentioned in the first paragraph of the above feature, did not return to Burnaby Mountain in 1972. His feature film adaptation of Brave New World joined the long list of ambitious movie projects announced only to be abandoned in light of changing realities in the lives of the artists involved.
Recalling the first World Shakespeare Congress some fifty years along, I’m struck by how profoundly our media landscape has changed. I was hired by The Province in 1969, at a time when that daily considered itself a local paper, even though it was owned by a national chain. For the most part, it covered what went on in its community, reflecting then-managing editor Merv Moore’s belief that it was Vancouver’s “newspaper of record.” Early in 1971, I remember my entertainment department colleague Paul Raugust reporting daily on the qualifying matches for the World Chess Championships being held at the University of B.C. Graduate Centre.
My coverage of the Congress kept me busy for the better part of three weeks, beginning with the preview feature reproduced above. In all I wrote 10 pieces, coverage that included seven daily dispatches and three Spotlight Magazine features. At the time, I felt privileged to have been a witness to such an historic event. Today, I feel grateful to have been part of a time when newspapers mattered.