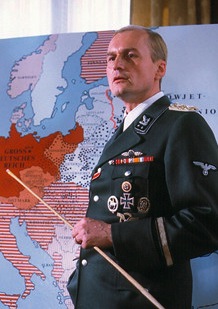 
Historical horror in a civilized setting


The publishing phenomenon of 2016 to date has to be Hitler, Mein Kampf. A Critical Edition. The German reissue of the notorious Nazi's 1925/26 memoir, in which he set out his political goals, sold out its initial print run of 4,000 copies within hours of its January 8 release. Effectively banned in Germany since 1945, the reprinted rant is the subject of considerable controversy. The scholars who produced it argue that the 2,000-page book's 3,700 annotations expose Hitler's "false allegations, his whitewashing and outright lies." Others, fearing a neo-Nazi resurgence, would have it forever out of print, overlooking the fact that Mein Kampf is available around the world in translation, with about 15,000 sold annually in the U.S. Realistically, the new edition deserves a place on every thoughtful reader's bookshelf, right next to Martin Gardner's invaluable guide to Lewis Carroll, The Annotated Alice (1960). And, yes, others will say it belongs instead alongside Leonard Wolf's Annotated Dracula (1975) or Susan Wolfson's Annotated Frankenstein (2012). Mein Kampf's reappearance also serves to remind us that it was on this day (January 20) in 1942 that the German Reich's key administrators gathered to discuss the infamous "final solution" to its "Jewish problem." That chillingly bland meeting is recreated in director Heinz Schirk's 1984 German-language docudrama, Die Wannseekonferenz, (The Wannsee Conference).

Sunday, April 10, 1988.
DIE WANNSEEKONFERENZ (The Wannsee Conference). Written by Paul Mommertz. Directed by Heinz Schirk. Running time: 87 minutes. Mature entertainment. In German with English subtitles. THE OUTCOME IS NEVER in doubt. It is, after all, what the Führer wishes, what the party wills and what the SS is eager to do.
There are, however, questions of form. Nazi Germany is not some mongrel communist state, you must understand, but the nearly perfect end-product of human evolution.
The men gathering this noon at Grossen Wannsee 56-58 are 15 of the Reich's best and brightest. Called together by Obergruppenführer Reinhard Heydrich, they are the nation's key administrators, a selection of soldiers and statesmen, all of them cultured, sports-loving Christians.
It is Tuesday, Janury 20, 1942. Originally scheduled for December 9, Die Wannseekonferenz (The Wannsee Conference) was postponed when America's entry into the war created a sudden increase in the regular governmental workload.
Today, though, it's business as usual. In accordance with Reichsmarshall Herman Goering's written order that they "direct the Jewish Question to a favourable optimal solution," they are gathered to approve "the Final Solution."
The Horror. There was a time when an artist, determined to journey into The Heart of Darkness, chose fiction as his medium. Turn-of-the-century novelist Joseph Conrad's soul-chilling examination of inner evil took readers on a voyage up a colonial African river.
In this century, fact is more harrowing than fiction. For West German television producer Manfred Korytowski, the horror was no further away than the prosperous Berlin suburb of Wannsee.
That it happened is a matter of record. The official minutes and subsequent sworn testimony made it possible for screenwriter Paul Mommertz to reconstruct the meeting in its entirety.
As staged by veteran television director Heinz Schirk, it comes to life again in The Wannsee Conference. Chillingly casual, this full-blooded docudrama is a compelling recreation of the moment when the German state bureaucracy joined with Nazi Party ideologues in history's greatest mass murder plot.
There are differences of opinion, to be sure. State Secretary Erich Neumann (Dieter Groest), representing the Ministries of Transport and Armaments, argues for an exemption for skilled armaments workers.
State Secretary Josef Bühler (Reinhard Giemnitz), representing the Governor-General's Office, foresees supply and jurisdictional problems in the Governor Generalship, a.k.a Occupied Poland.
Interior Minister Wilhelm Stuckart (Peter Fritz) is concerned that the sweeping provisions of the "solution" will play havoc with the existing special laws pertaining to persons of mixed blood.
As the meeting proceeds, it becomes obvious that no one present is concerned with right and wrong. That an entire people, an estimated 11 million human beings, is being marked for extinction is taken for granted.
Here, the issues are administrative, economic and jurisdictional. "What lies ahead," says the expansive, charismatic Heydrich (Dietrich Mattausch), "is an organizational task unparalleled in history."
The Horror. As this superb recreation reminds us, it happened not in a jungle but in a civilized, corporate setting. In all, it took 85 minutes, during which lunch was served.

Afterword: Not noted in the above review, but emphasized in the press notes that accompanied the Canadian release of Die Wannseekonferenz, was the fact that filming took place in the room where the original meeting was held. A 1992 Dutch documentary, also called The Wannsee Conference, took a broader view, using archival footage to detail the events that led up to the infamous meeting. In 2001, HBO and the BBC cooperated on a remake of Heinz Schirk's German-language docudrama. Called Conspiracy, it was directed by veteran American TV director Frank Pierson, and featured star performers such as Kenneth Branagh (as Heydrich) and Stanley Tucci (as Eichmann).
On this day (January 20) in 1992 — the 50th anniversary of the conference — the building in which it occurred was repurposed as a Holocaust memorial and museum. In recent years, some historians have called into question the centrality of the Wannsee conference to the historical Holocaust. In 2003, English scholar Mark Rosenman published The Wannsee Conference and the Final Solution: A Reconsideration, in which he argues that the final decision on the Final Solution was not taken on January 20, 1942. Making the same point is Francis Dupont in his 58-page The Myth of the Wannsee Conference, published in 2014. Though they consider its importance overstated, neither writer disputes that the meeting occurred.