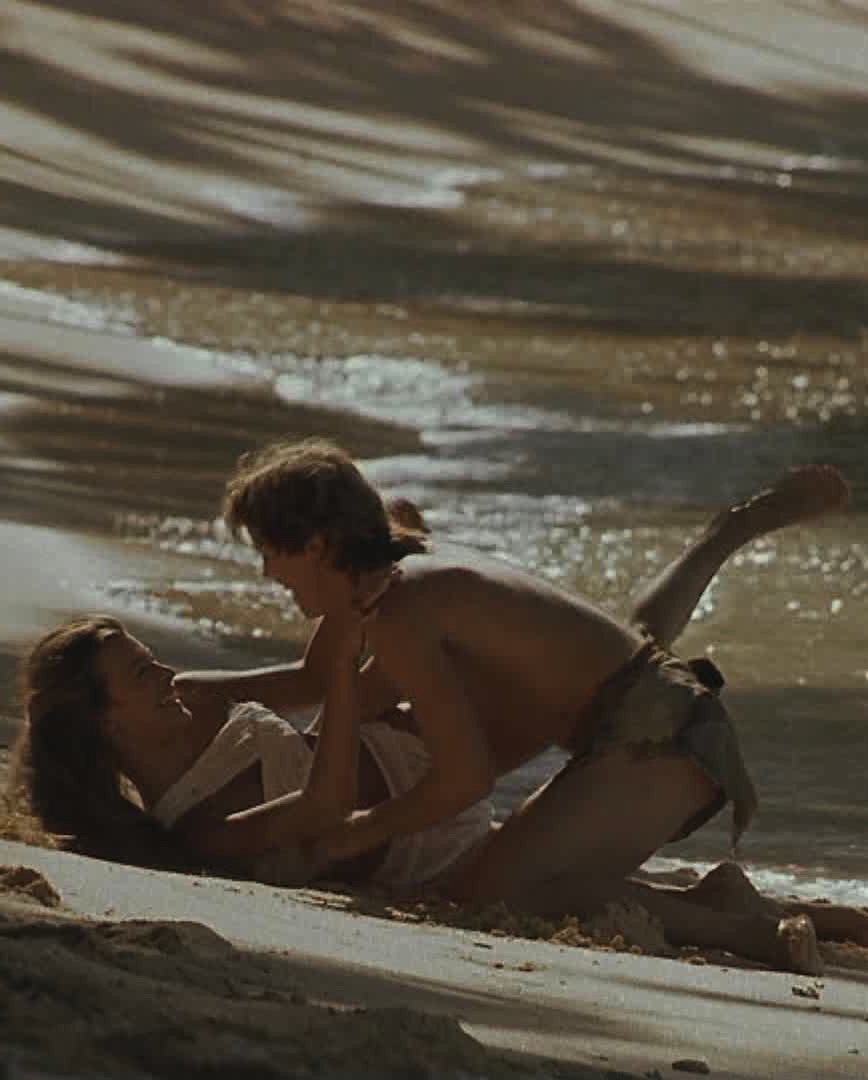 Lilli (Milla Jovovich) and Richard (Brian Krause) struggle with puberty in the surf of a South Sea paradise in 1991's Return to the Blue Lagoon.


Actress Milla Jovovich has never made a secret of her Eastern European roots. "I am a strong Ukrainian girl," she said in an August 2005 interview with the Pravda.ru website. "That is why I work a lot." Born in Kiev on this day (December 17) in 1975, the outspoken action star has expressed concern about the current crisis in her homeland, but she does so in measured, non-confrontational language. The daughter of Soviet-era Russian film star Galina Loginova, Jovovich immigrated to the U.S. with her parents at the age of five, growing up in California with a broader worldview than most of her classmates. Pretty and precocious, she began modelling at nine and acting at 12. She achieved international stardom at 22 in Luc Besson's The Fifth Element (1998), going on to marry her director. Besson then cast her as the most famous of all Frenchwomen, Joan of Arc, in his 1999 historical epic The Messenger. A combination of athleticism and martial artistry won her the role of zombie-killer Alice in the video-game-inspired Resident Evil (2002). Jovovich starred in four subsequent sequels, and is currently married to British-born director Paul Anderson, who wrote and produced all of the features in the series. More candid about her career than her politics, she is on record as saying that her second feature film (and first starring role), 1991's Return to the Blue Lagoon, was the worst film she ever did.

Friday, August 2, 1991.
RETURN TO THE BLUE LAGOON. Written by Leslie Stevens. Based on the novel The Garden of God, by Henry De Vere Stacpoole. Music by Basil Poledouris. Produced and directed by William A. Graham. Running time: 98 minutes. Mature with the B.C. Classifier's warning: occasional violence and nudity. I SUPPOSE IT WAS inevitable.
Last year [1990], the movie moguls offered adolescent audiences a remake of Lord of the Flies. Based on William Golding's "moral fable," it told the story of castaway schoolboys who revert to savagery on a desert island.
Now, in the interests of moral balance, we must Return to the Blue Lagoon.
The third screen adaptation of Henry De Vere Stacpoole's 1908 novel The Garden of God, director William Graham's film celebrates noble primitivism and "natural love."
Taken at face value, his postcard-pretty feature is an Edenic affirmation of romance and monogamous marriage. Here, the prevailing philosophy appears to be a moony-eyed "live slow, die young."
Graham's version opens with a small boat adrift in the "South Pacific Ocean." It is 1897, 15 years since castaway children Emmeline and Richard (Brooke Shields and Christopher Atkins in Randal Kleiser's 1980 feature The Blue Lagoon) were shipwrecked.
When their drifting boat crosses the path of the schooner La Violante, the diapered teens are already dead. Rescued, though, is their son (Jackson Barton), a toddler who is delivered into the care of Sarah Hargrave (Lisa Pelikan), a widowed missionary returning to San Francisco from Tahiti with her infant daughter Lilli (Emma James).
With hardly a pause for breath, screenwriter Leslie Stevens contrives a new disaster, and little Richard is returned to the island of his birth, this time in the company of stepmom Sarah and his new kid stepsister.
The good news is that there is a fully-furnished beach house from the previous movie waiting for them. The bad news is that the place is still uncharted and well off any known shipping lanes
The indefatigable Mrs. Hargrave lasts about seven years, just long enough to instil a few survival skills and proper Victorian values into the energetic pre-teens (eight-year-old Courtney Phillips and Garette Patrick Ratliff, 10). She even writes a burial service for them to recite over her hillside grave.
And now it is six years later. No longer little, Lilli (15-year-old Milla Jovovich) needs someone to talk to. "Mother," she prays. "I don't know what to do. He's changed. I've changed. I'm confused."
So is Richard (Brian Krause).
Aside from Lilli's mom, he's never really seen another woman. Sure, he feels stirrings, but without any basis for comparison, he doesn't even know that his island companion is drop-dead gorgeous.
At this point, filmgoers can stop taking Return to the Blue Lagoon at face value.
Richard, who has seen Lilli's next-to-naked body every day for at least 13 years, suddenly starts acting like a suburban nerd smitten with a cheerleader.
At this point, director Graham's drama starts looking a lot like a softcore peep show for recent victims of puberty blues. Their "natural love" plays like standard, sappy, adolescent infatuation in a context that "justifies" a bit of teenaged female toplessness.
The National Geographic-style nudity aside, his film really is kid's stuff. This Return to the Blue Lagoon is a generally wholesome, mostly silly fantasy for the Home Alone generation.

Afterword: Return to the Blue Lagoon was among the dozen theatrical features credited to veteran television director William Graham. Another was 1982's Harry Tracy, Desperado, a Bruce Dern western shot on location in Barkerville and Victoria, B.C. Milla Jovovich's Canadian connection is, of course, the Resident Evil franchise. Although the producers have shot scenes in Germany, Mexico, Japan and Russia, Toronto (as Racoon City) has been home base for four of the five films to date.