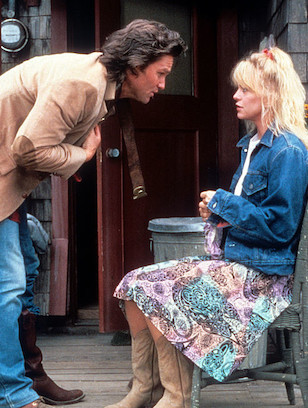 
Romance a result of eternal optimism


During the Oscars broadcast on this day (March 30) in 1989, Kurt Russell appeared about to propose to Goldie Hawn in front of the show’s 1.5 billion viewers. A couple in real life, they co-starred as unlikely lovers in director Garry Marshall’s 1987 courtship comedy Overboard.

OVERBOARD. Written by Leslie Dixon. Music by Alan Silvestri. Directed by Garry Marshall. Running time: 112 minutes. Rated Mature with the B.C. Classifier’s warning “some coarse language, occasional suggestive scenes." JOANNA SLAYTON (GOLDIE HAWN) is not what you'd call sympathetic. A well-heeled martinet, she arrives in Elk Cove aboard a 130-foot yacht.
Dean Proffitt (Kurt Russell) is not what you'd call polished. An odd-job carpenter, he's been making a marginal living in the Oregon fishing community when he's summoned dockside to do  some "emergency" repairs on milady's closet.
They do not hit it off. Dissatisfied with his choice of woods, the sour, bored heiress refuses to pay the honest craftsman. Adding insult to financial injury, she shoves him Overboard, tossing his tools after him.
Its opening scenes are not what you'd call funny. Inspired, perhaps, by Italian director Lina Wertmüller's 1974 Swept Away, director Garry  (Nothing in Common) Marshall's new comedy shows us a pathologically unpleasant woman abusing an economically disadvantaged male.
As in the Wertmüller film, the two soon enter into a new relationship, one in which their power positions are reversed. Swept Away, a politically-charged tale of rape and resentment, featured a couple cast away on a desert island.
Marshall, a filmmaker with his roots in TV comedy, moves things in a significantly lighter direction. Turning the tale of Joanna's come-uppance into something like screwball comedy, he has her tumble over the side in the dead of night.
Fished out of the sea by a passing garbage scow, an amnesiac Joanna is identified by the aggrieved Dean as his "wife” Annie. What he's looking for, it turns out, is a housemaid.
A widower with four out-of-control kids, he's determined to get $600 worth of cooking, cleaning and child care out of her. As she struggles to regain her memory, the no-longer-pampered Joanna has to cope with her marital “duties.”
At first she's appalled. "I'm a short, fat slut,” she murmurs, piecing together what Dean has told her about their previous “life” together.
After a bit, despair sets in. "My life is like death," she tells him. "My children are the spawn of hell, and you are the devil."
Finally, in an angry burst, she accepts herself as Annie. "Now it's entirely clear to me why I've chosen to block it out," she flares at her poverty-line family.
Americans, unlike their Continental cousins, are eternal optimists. Pop-culture artifacts like Overboard are designed to affirm the essential goodness in all men and women.
Facing the challenge that is Annie's life, Joanna thrives, finding within herself the strength to become a first-class wife and mother. As written by Leslie Dixon, Overboard is an example of all-American dreaming.
As Annie/Joanna, Hawn demonstrates an impressive new performing range. Russell, her real-life beau, ambles through their second film together, doing his practised, crudely attractive country-boy bit.
Under Marshall's relaxed direction, the result is a good-natured if shambling production, a picture with a chilly, overlong beginning that makes its way to a warm, pleasingly romantic conclusion.

Afterword: Sunday evening (March 27), Will Smith connected with Cris Rock during the 2022 Oscars broadcast, and today a Google search will yield “About 4,500,000,000 results.” Kurt RusselI and Goldie Hawn displayed a very different kind of connection on the 1989 Academy Awards show. The performers first met in 1968 on the set of 1968’s The One and Only, Genuine, Original Family Band, a Disney musical in which they were supporting players. They became romantically involved during the filming of 1984’s Swing Shift, in which they co-starred as lovers on the Second World War home front.
The famously unmarried couple’s son Wyatt was born in July 1986, and is said to have taken his first steps on the set of Overboard. Fast forward to 2002, and his doting parents relocated the family home to Vancouver so that their 15-year-old could attend high school and pursue his passion for hockey. For the next three years, they lived in a Tudor mansion in the Shaughnessy neighbourhood, as he honed his goal-tending skills with the Junior B Richmond Sockeyes, the Langley Hornets and the Coquitlam Express.
A couple to this day, Russell and Hawn made their most recent working visit to Vancouver to play Santa Claus and his Mrs in 2020’s The Christmas Chronicles: Part Two, the sequel to the filmed-in-Toronto The Christmas Chronicles (2018). As for the ever-unsubstantiated tabloid rumours of their imminent break up, the only answer seems to be "Ho-ho-ho!"