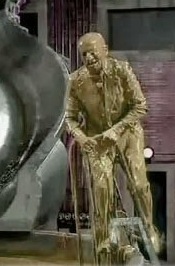 Escaping from foreign agents in a bubblegum factory includes a generous sampling of its wares for Victor Pivert (Louis De Funès) in director Gérard Oury's 1973 comedy The Mad Adventures of 'Rabbi' Jacob.

All in La Famille


He was the biggest international star that Americans never heard of. Born on this day (July 31) in 1914, Louis De Funès was Europe's favourite funnyman in the 1960s. His one feature widely released in the U.S. was 1973's The Mad Adventures of 'Rabbi' Jacob.

Saturday, August 31, 1974
THE MAD ADVENTURES OF 'RABBI' JACOB (original title: Les aventures de Rabbi Jacob). Written by Danièle Thompson, Josy Eisenberg and Roberto De Leonardis. Music by Vladimir Cosma. Co-written and directed by Gérard Oury. Running time: 95 minutes. General entertainment. In French with English subtitles. THERES SOMETHING FUNNY going on here. Racism is supposed to be out of vogue with sophisticates. Ethnic humour is considered, well, indelicate.
But, qu'est que c'est? Here is the respected French comic Louis De Funès, gleefully sniping at Germans, the Dutch and Belgians. He's outraged by the idea of interracial marriage and when he discovers his chauffeur is Jewish . . . incroyable!
Oh, yes, there's a way around the racist taboo, as any fan of TV's All in the Family knows. For the moment, comedy writers can get away with anything, so long as the racist is the ultimate butt of the joke.
That, of course, is the tack taken by French writer-director Gérard Oury in his The Mad Adventures of 'Rabbi' Jacob, the former actor's eighth directorial assignment. A slapstick farce co-written by Oury's daughter Danièle Thompson, it manages to quite literally candy-coat its bigoted hero, in one of the funniest scenes in one of the funniest movies to turn up this year.
The incident takes place in a factory not far from Paris. Diminutive industrialist Victor Pivert (De Funès) has just lost his car in a freak accident and, because his Orthodox Jewish chauffeur Salomon (Henri Guybet) refuses to work after sunset on Friday, he is seeking some non-religious help.
Inside the building, he comes upon a nest of foreign intrigue. Agents of an unnamed Arab power have just captured a member of their homeland's liberal-left resistance party, a dashing young rebel named Slimane (Claude Giraud), and they are busy trying him for high treason.
There is much confusion, generating a hilarious scuffle, chase and final escape. Almost no one gets away without sampling job lots of the factory's wares, Yankee brand bubble gum.
Pivert becomes Slimane's hostage, and together they are pursued by the evil-looking Colonel Fares (Renzo Montagnani), who is determined to do away with them both. While all this is going on, kindly Rabbi Jacob (Marcel Dalio) is en route from New York.
Though French-born, Jacob has not seen his family in 30 years. He is returning now for the bar mitzvah of one of his nephews.
Unbeknownst to Jacob, who is still clearing customs, Pivert and Slimane have assumed the guise of orthodox rabbis. When the real Jacob finally steps into the arrivals lounge, he is taken into custody by the officious Inspector Andreani (Claude Piéplu, seen most recently as the husband-murder victim in Claude Chabrol's Les noces rouges), a policeman on Pivert's trail.
Meanwhile, the surprised Pivert is met by Jacob's relatives and, together with Slimane, is whisked off to a joyous reception-cum-block party. At about this time, he manages to slip away long enough to call his wife Germaine (Suzy Delair).
"Where are you?" she demands. It is, after all, their daughter's wedding day.
"I'm hiding out with some Jewish friends."
"You have Jewish friends?" she says, taken aback.
Are you ready for it? Hold on tight.
"Some of my best friends are Jewish," he says with desperate sincerity.
And so, I suspect, some of the best friends of this warm-hearted, fast-moving comedy will be Jewish as well. Director Oury manages to walk the thin line between outrageously funny and just plain outrage with sure-footed skill.
Throughout, he manages to remain respectful of beliefs and institutions while poking fun at people. His active, shrewd, essentially well-meaning Pivert is more fun than a barrel of Bunkers.
*    *    *
VIVE LA DIFFÉRENCE — There's something funny going on here. Although 20th Centrury-Fox, the company with the North American distribution rights to Les aventures de Rabbi Jacob, has an English-dubbed version, Vancouver audiences are being treated to the original French-language film.
Humour almost always loses something in translation. A subtitled print gives audiences the opportunity to hear the right voices and appreciate the inflections, if not the actual words, of the players.
By booking such a print, Odeon Theatres pays its Vancouver patrons a large compliment. It, in turn, is to be congratulated.

Afterword: On this day last year, a frequent visitor to Reeling Back wrote to ask why I'd not noted the Louis De Funès centenary. He pointed out that Europeans were marking the occasion with editorials, exhibitions, commemorative collectibles and retrospective screenings of his films, all part of the fuss that a major celebrity anniversary attracts. I had no good answer, other than the fact that this French cinema icon (with more than 145 theatrical feature film appearances noted in his IMDb filmography) was largely unknown to North Americans. Yes, France had given him its equivalent of a knighthood, inducting him into the Légion d'honneur in 1973, and put his picture on a 3.00 franc postage stamp (1998). Horticulturalists have probably smelled the Louis De Funès rose, named for him in 1984. But, with the exception of The Mad Adventures of 'Rabbi' Jacob, no Hollywood distributor  ever gave his feature films wide release in the U.S. or English-speaking Canada.
Born on this day (July 31) in 1914, De Funès toiled as a stage actor and movie bit player for nearly 20 years before emerging as a top-billed performer. It was at a time when guying French policemen was clearly in the air. A year after Jack Lemmon played love-smitten flic Nestor Patou in Irma la Douce, and Peter Sellers made his debut as Inspector Clouseau in The Pink Panther (both 1963), De Funès broke through to European stardom as Ludovic Cruchot in 1964's Le Gendarme de Saint-Tropez. Perhaps his age — De Funès was 49 — frightened Hollywood executives, who were seriously targeting the youth demographic. Despite being a superstar overseas, on this side of the Atlantic De Funès remained unknown to all but big city art house patrons. What made The Mad Adventures of 'Rabbi' Jacob unique for its time was the fact that it framed the differences between Arabs and Jews as a family fight. Oury and De Funès used slapstick comedy to advocate mutual respect and reconciliation, releasing their film a year after the 1972 Munich massacre and in the same month as the Yom Kippur war. That certainly ranks among the good reasons to remember De Funès on the 101st anniversary of his birth.