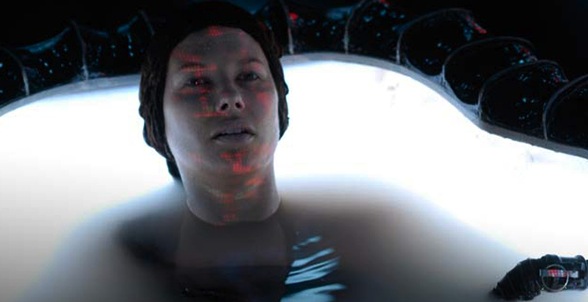 
Bard on the Beach begins its 27th season tonight (June 3). Over the years, its company of Shakespearean players have provided many a memorable moment for fans of TV science fiction. Our quiz involves matching the performer to his or her close-up moment on the small screen.


SHAKESPEARE ON THE HOLODECK

FANTASY AND SCIENCE FICTION has been part of the TV production mix in Vancouver since 1983, the year that U.S cable broadcaster HBO gave the green light to The Hitchhiker. The Twilight Zone-like anthology series ran for six seasons (1983-1991), during which members of the local theatre community demonstrated their ability to hold their own among the Hollywood guest stars. A major production centre today, Vancouver owes much of its success to its actors, including those regularly seen at Bard on the Beach. In the quiz that follows, name the Vancouver-produced sci-fi series that featured the following Vanier Park alumni:

1.      SCOTT BELLIS, a founding member of the theatre company, has played some of the Bard's biggest roles, including Henry V and Hamlet. Between 1993 and 1997, he impressed sci-fi fans with his quirky portrayal of  Max Fenig, a UFO geek and self-identified alien abductee in three linked TV series episodes that end with his declaration "I'm just a man."

2.      ALESSANDRO JULIANI went from playing Montjoy in the 2002 Scott Bellis Henry V to the warrior king himself in the 2010 production. Between 2004 and 2009, he played tiger-tatooed Lt. Junior Grade Felix Gaeta in 59 episodes, during which the tactical officer becomes chief of staff to the president.

3.      TIFFANY LYNDALL-KNIGHT shone in roles as different as the shepherdess-princess Perdita in 1997's The Winter's Tale and an athletic Ariel in 2000's The Tempest. Between 2006 and 2009, during 10 episodes as the not-quite human Hybrid, she uttered cryptic, stream-of-consciousness dialogue that occasionally included quotes from Shakespeare.

4.      HAIG SUTHERLAND, a Bard regular since 1997, has been seen as the tragic king Richard II (2000) and the conniving triumvir Octavius Caesar in 2010's Antony and Cleopatra.  Between 2009 and 2010, he played Sgt. Hunter Riley, initially assigned to Icarus Base, but fated to live out a different Destiny over 16 episodes.

5.      ALLAN ZINYK's energetic comic performances have enlivened more than 20 Bard productions. He became a sci-fi fan favourite with a single appearance as the conspiracy theorist Blaine Faulkner, who memorably tells non-fiction novelist Jose Chung that "I didn't spend all those years playing Dungeons and Dragons and not learn a little something about courage."

Bonus Question:
Name the classic science fiction feature film that reworks the plot of Shakespeare's The Tempest; name the character based on Prospero's airy spirit Ariel.

BONUS ANSWER:
In 1956's Forbidden Planet, Ariel is re-imaged as the ever helpful Robby the Robot (a intelligent machine with the voice of actor Marvin Miller).


The above is a restored version of a VCON 37 website quiz by Michael Walsh originally posted in 2011. For additional information on this archived material, please visit my FAQ.

Afterword: This year's Bard on the Beach