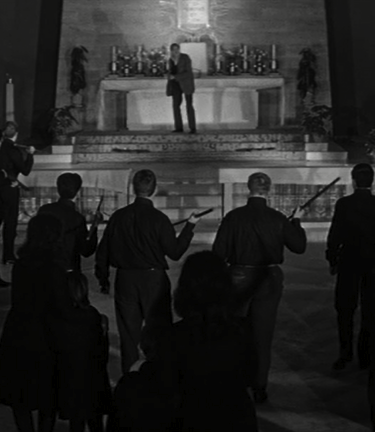 Robert Morgan (Vincent Price) makes his last stand against the "freaks" that have him surrounded in 1964's The Last Man on Earth.

Beginning with the end


Last Man was my first review


Today (October 3) is the first day of VCON 39, the 2014 Vancouver science-fiction convention. Participating in this three-day event has become an annual tradition for me. This year's theme, "Military Might — From Swords & Sorcery to Phasers & Grasers," almost seems keyed to the multiple conflicts ongoing in the real world at this moment. In fact, though, it acknowledges VCON's guest of honour, David Weber, author of the multi-volume Honor Harrington series of novels, and other military-themed science fiction. My own schedule today includes moderating a 3 p.m. panel called Ellie & Honor, Torin & Jane: Our Fighting Women. Under discussion will be the military records of science-fiction's best-known servicewomen — Lois McMaster Bujold's Ellie Quinn, Weber's Honor Harrington, Tanya Huff's Torin Kerr and John Scalzi's Jane Sagan. Other names may be mentioned, of course — Wilma Deering, Ellen Ripley and Maria Hill immediately come to mind — but that's up to the panelists. Last year, I launched this website on the con's opening day, and tomorrow (October 4) will be Reeling Back's first anniversary. To mark the last day of my website's first year, I'm posting a restoration of my first published film review, a notice that ran in the University of Toronto's newspaper The Varsity 50 years ago yesterday. A science-fiction film, it was called The Last Man on Earth (1964).

Friday, October 2, 1964.
THE LAST MAN ON EARTH. Co-written by William F. Leicester, Furio M. Monetti and Logan Swanson (Richard Matheson), based on Matheson's 1954 novel I Am Legend. Music by Paul Sawtell and Bert Shefter. Co-written and directed by Ubaldo Ragona and Sidney Salkow. Running time: 86 minutes. HE IS TRAPPED BENEATH the high altar, wounded, no place left to which  he can run. Hopeless defiance fills his voice as he turns to face the black-shirted hunters closing in for the kill.
"You're all freaks! Every one of you!"
That, Mr. Price, is putting it mildly.
Vincent Price, they say, was once a fine actor. More recently, he has become the Dean of Horrors for American-International Productions, and chief proponent of its "movie-making for fun and profit" philosophy.
Currently, his acting range has been reduced to menace-comic, or menace-tragic.
In The Last Man On Earth he has an opportunity to exercise the sub-varieties of the latter style, among which are included: paternal menace, dedicated menace, resigned menace and determined menace.
That Mr. Price is cast in the role of the last human being in a world reduced to blood-lusting zombies, drug-controlled mutants and bureaucratic fanatics is a striking irony, for his character is both hero and villain.
Even overlooking the sterility of the script, we are still forced to admit that most of the part's potential was needlessly lost. Seeming to be satisfied with a caricature, Price has lapsed into the playing of himself.
This time, unfortunately, he has overdone it.
Richard Matheson's original novel, I Am Legend, owed much to H.G. Wells's Time Machine. In transferring it to the screen, however, indecisive direction robs much of the book's credibility.
A plague from an unknown source has swept the globe, reducing humanity to a race of kitten-weak, night-walking zombies. The one exception, a scientist with immunity, is terrorized by the pathetic creatures who want him to be as they are.
The groundwork is laid for a fine science-fiction thriller. We are then asked to accept that the mysterious disease responds to the classic vampire exorcisms — garlic, mirrors and stakes through the heart.
As any student of the subject can confirm, the terror that lies locked in ordinary things is far greater than that of a manufactured monster. We must admire the skilful use of the flashback technique to establish the reasons for the scientist/hero's solitary existence.
No lurching lizard, we feel, could have chilled the bone marrow more thoroughly than the night-shrouded scenes of mass cremation in which helmeted, masked troops commend truckloads of plague victims, sewn in their blankets, to the flaming slopes of a yawning pit.
Despite serious short-comings in acting and writing, The Last Man On Earth wins the big E for Effect — it's The End.

The above is a restored version of a Varsity review by Michael Walsh originally published in 1964. For additional information on this archived material, please visit my FAQ.

Afterword: In the beginning . . . so, that was my first published review, a bit of juvenilia that is what it is. In the years since, I like to think that my writing has improved. I've certainly come to a greater appreciation of the moody visuals that distinguished the best of 1960s Italian exploitation cinema, and for the later performances of Vincent Price as well. I've also learned that Richard Matheson disliked The Last Man on Earth so much that he insisted his name be changed in the screen credits. This year, it turns out, is the 60th anniversary of the publication of Matheson's original novel, now  an acknowledged classic of the zombie genre. His book inspired two more theatrical features — 1971's The Omega Man (1971), with Charlton Heston in the title role, and I Am Legend (2007) with Will Smith — both of which make its beleaguered hero a military man.