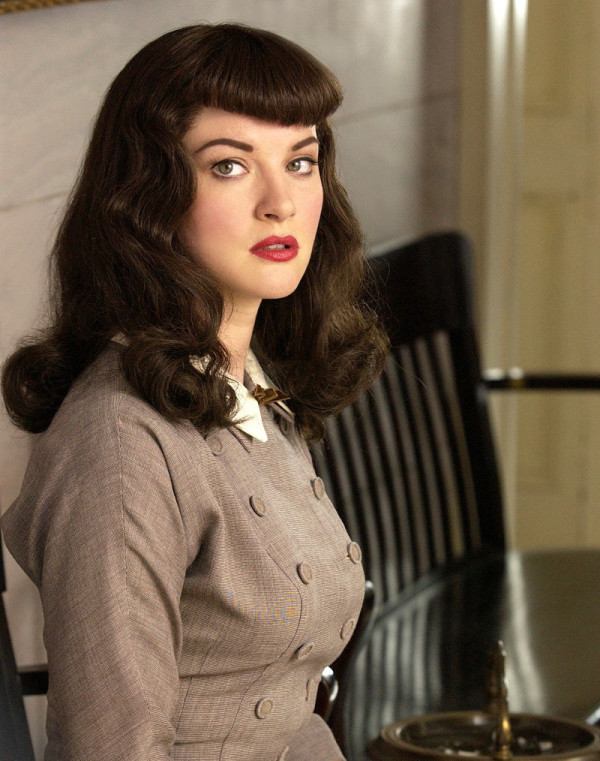 Pin up model Bettie Page (Gretchen Mol) waits to be called before the U.S. Senate's Subcommittee on Juvenile Delinquency.


Witness Borne to the Passion of the Pin Up Queen


In March, 2013, Joss Whedon chose to showcase his Much Ado About Nothing at the South by Southwest Film Festival, one of a dozen such events to feature the boutique production following its 2012 Toronto International Film Festival world premiere. Held annually in Austin, Texas, SXSW has worked to establish itself as the launch pad for just such independent and low-budget films. Last Saturday [March 8], director Rob Thomas premiered his Veronica Mars feature there. The very model of a modern motion picture, some $5.7 million of its $6 million budget came as the result of a month-long Kickstarter campaign on the Internet. Apparently fans of the three-season television series (2002-2007), really, really wanted to see its 21st-century Nancy Drew return to her hometown of Neptune, California. On this day [March 12] in 2006 the SXSW schedule included the U.S. premiere of director Mary Harron's The Notorious Bettie Page. Like Whedon, Harron chose to shoot her HBO feature almost entirely in black and white. Just as the stark photographic style suits Shakespeare, it's also perfect for a clinical examination of 1950s social attitudes. Like her debut feature, I Shot Andy Warhol, first seen at 1996 Cannes Film Festival, it's a film that deserves its cult following.

The above is an original  Reeling Back review by Michael Walsh, first published in 2014. For additional information on material featured on this website, please visit my FAQ.

Afterword: Of course, the real life story of Bettie Page did not end there. As noted in the Afterword to my review of director Joe Johnston's The Rocketeer (1991), she achieved new fame in the 1980s. Among those responsible for igniting interest in her was comic artist (and Rocketeer creator) Dave Stevens. Director Mary Harron, who co-wrote The Notorious Bettie Page with (and for) actress Guinevere Turner, planned to make the film immediately after her debut feature, I Shot Andy Warhol (1996). Financing proved a problem, and so she and Turner took on the task of adapting Bret Easton Ellis's nasty novel American Psycho to the screen. Released in 2000, it was enough of a box-office success to make a return to the Page project possible. Among Harron's directing assignments between features was the March 2004 episode of The L Word, a filmed-in-Vancouver television series for which Turner worked as a writer and script editor. Despite being about a teenaged vampire, Harron's most recent feature, the filmed-in-Montreal The Moth Diaries (2011), lacked the characteristic bite of her previous films, according to Variety critic Justin Chang.