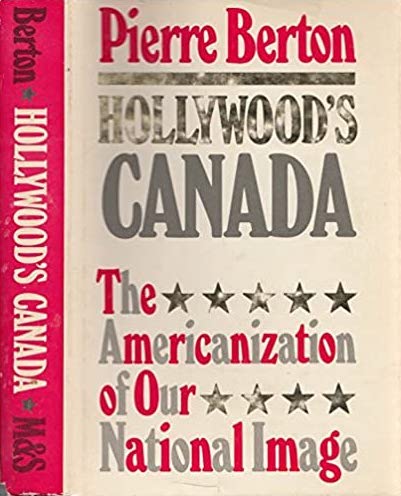 Author Pierre Berton says HOLLYWOOD’S CANADA is “not a book about movies” but “a book about the Canadian image” in the movies.


According to Pierre Berton, U.S. moviemakers were out to brainwash their northern neighbours. Born on this day (July 12) in 1920, he exposed their con game in his 1975 social history, Hollywood's Canada: The Americanization of Our National Image.

MARSHALL DELANEY AT THE MOVIES: The Contemporary World as Seen on Film, by Robert Fulford. Peter Martin Associates,1974. 244 pages, indexed, $10.00.

Afterword: OK. I may have been overly optimistic in my conclusion that “the era of Canadian film literature is well begun.” In 1975, three books constituted a boomlet, and was enough to create real excitement, if not enough to make a real difference. And, to be honest, it was an excitement I welcomed. In 1979, I made my own contribution to the bookshelf with The Canadian Movie Quiz Book. Then, as now, I believed that too little emphasis was placed on Canada's contribution to the motion picture business. The 150-page paperback was my attempt to honour the too-easily-ignored accomplishments of this nation's cinema artists.
In the years since, I’ve joked that its publisher spared every expense in the book's promotion. It did not make me rich or famous, or particularly increase my influence in the critical community. That said, I had a lot of fun writing it. Yesterday, in preparing this afterword, I wondered if there was an up-to-date list of Canadian film books on the Internet. A Google search took me to a website called Film Trap.
Maintained by self-described “rabid film fanatic” Jason Decloux, it features his 2017 posting The Ultimate List of Canadian Film Books. Imagine my surprise on reading his introductory paragraph: “I don’t simply mean tomes about Cronenberg and Egoyan. I’m talking about stuff like the memoir by the director of Alien Thunder, the history of STUDIO D: the all-women unit of the NFB, and the Canadian Cinema Quiz Book of 1979!”
More than 40 years on, it’s a pleasant surprise to discover that my first (and, to date, only) book is not forgotten. It appears that the era of Canadian film literature is not done yet.

See also: My 1975 interview with Pierre Berton following the publication of Hollywood's Canada: The Americanization of Our National Image.