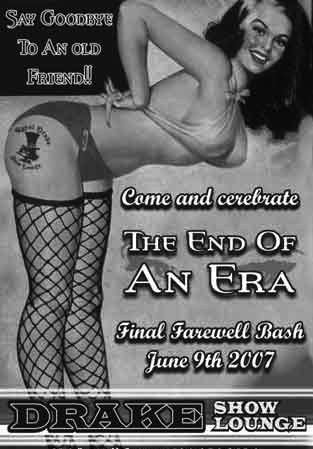 Gone, but not forgotten. In director Jerome Gary's Stripper, Vancouver's Drake Hotel of the mid-1980s is celebrated as one of "the best strip bars in the world."


Recognition and respect for the world's best


An email earlier this month from the dynamic Crystal Precious alerted me to the pre-release party held on Feb. 15 to celebrate her first studio album, Queen of Sass. Ms Precious is the founder of the Sweet Soul Burlesque troupe and a key player in the international neo-burlesque movement. (Unlike your father's burlesque, today's neo incarnation is proudly feminist, with its emphasis on style and performance.) Her note reminded me that, while Vancouver is celebrated for the quality and creativity of its performers, it is a celebrity that comes with more than a little deja vu. In her groundbreaking social history Burlesque West: Showgirls, Sex, and Sin in Postwar Vancouver (2009), University of B.C. professor Becki L. Ross chronicles a 40-year-long struggle by this city's strip-tease artists for recognition and respect. A complex tale, it includes the moment in 1983 when Vancouver's Tarren Rae went to Las Vegas. There, she "competed against 45 dancers from across North America and was crowned the best exotic dancer on the continent." At the time, Vancouver was being called the "striptease capital of Canada — maybe even the world." The sort of acclaim that the tourist brochures never mentioned, it did attract movie maker Jerome Gary. The result, his feature documentary Stripper, offered Vancouver's women the recognition and respect they deserved.

Thursday, June 19, 1986.
STRIPPER. Music by Jack Nitzsche and Buffy Sainte-Marie. Conceived, co-produced and directed by Jerome Gary. No Classifier's rating (Vancouver International Film Festival screening). WHEN JEROME GARY went to see the show at Powell Street's Drake Hotel, he took friends.      A cinematographer. Soundmen. Gaffers, grips and gofers.
As the dancers rocked, his camera rolled, recording for all time an aspect of local culture not covered in the official Tourist Bureau brochures. A New York movie producer making his directorial debut, Gary was shooting scenes for the film Stripper.
Last June [1985], Gary booked the Robson Square Cinema for a Sunday afternoon preview screening of the finished feature. Invited were the local people who'd worked on it, their friends and a couple of critics.
An obvious question: of all the places that you might have featured in an examination of strip-tease dancing, why choose Vancouver?
"I didn't choose Vancouver, " Gary shrugs. "Vancouver chose me."
Are you listening, [B.C. Minister of Tourism] Claude Richmond? "The Drake, the Marr and the Cecil (Hotels) are, in my opinion, the best strip bars in the world," Gary says.
On screen, his Stripper recalls the Pumping Iron pictures, not surprising since Gary produced the original Pumping Iron (1977) documentary. Like the recent Pumping Iron II: The Women (1985), Stripper profiles several representative competitors in a professional development contest.
Here, the featured performers are vying for the Golden G-String Award, the central event at 1983's First Annual Strippers' Convention in the Las Vegas Sahara Hotel. Three of the five women spotlighted work out of Vancouver.
New York-based magazine writer Jim Verniere attended the convention. "It soon becomes clear," Verniere reported in the October 1985 issue of Film Comment magazine, "that there are two kinds of stripper: those who work where the laws are strictly enforced (Canada) have elaborate acts. Those who strip where anything goes are relatively artless.
"The Canadians are a healthy, sororal lot with theatrical agents, good pay and decent working conditions." Verniere wrote. "U.S. strippers are a harsher crowd . . . There are no strippers from New York, the fleshpot of the East. 'Too sleazy,' explains a filmmaker.''
In Gary's picture, the emphasis is on the first kind of stripper. In his version of the competition, the finalists are all hard-working professionals with generally normal backgrounds and reasonable-sounding aspirations.
Los Angelino Sara Costa lives at home with her mom, who sews her costumes for her. Janette Boyd, a former Minsky showgirl, is a single mother living in a bungalow just outside of Las Vegas.
The Vancouver contingent includes Kimberly "Danyel" Holcomb, Loree "Mouse" Menton and Lisa "Gio" Saurez. Danyel is seen perfecting her competition routine in the Vancouver strippers' gym, while Mouse and Gio are interviewed on the road in rural Alberta.
As a filmmaker, Gary approaches his subject with a mixture of admiration, fascination and old-fashioned respect. In Stripper, he offers a squeaky-clean portrait of the professional peeler's art.

Afterword: Together with her Sweet Soul Burlesque colleagues, Crystal Precious has put Vancouver on the cutting edge of the North American neo-burlesque movement. Tomorrow (Feb. 27), and every Thursday, troupe members perform three "Sweet Sip" sets at The Keefer Bar. In 2005, the group was one of the founders of the Vancouver International Burlesque Festival, a non-profit society. Its 2014 edition is scheduled for May 1-3. Today, though, Ms Precious is focused on March 18, the release date of her Queen of Sass studio album, which features music that she describes as "downtempo hip hop, or 'strip hop'." Currently online, there is a music video featuring Precious and six members of the Sweet Soul troupe introducing the album's first single, Apple Pie.