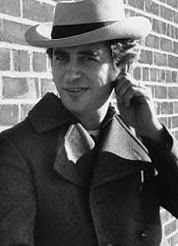 Underground film director ROBERT DOWNEY discussed his approach to filmmaking during a visit to Toronto in 1967.


A satirical voice from the underground


Though he made his name directing off-Hollywood features, he may be best known now as the father of a major mainstream movie star. Born on this day (June 24) in 1936, Robert Downey Sr. discussed his approach to underground filmmaking during a visit to Toronto in 1967.

BOB DOWNEY DOES NOT look at all like an important underground filmmaker. His neat grey suit, pin-striped and double breasted, is an unexpected shell for the creative mind that produced Chafed Elbows, the satirical feature opening this evening [1967] at Toronto’s Cinecity.
It is billed with Kenneth Anger’s evocative 1963 short Scorpio Rising. The presentation is something of a motion picture event, marking the first time that a Canadian exhibitor has booked a pair of so-called underground films for a regular week’s run.
Arriving yesterday from New York, Downey presents himself with hard-edged honesty, a straightforward and articulate spokesman for an often incomprehensible corner of modern movie making.
“I’m commercial,” he told a group of local filmmakers gathered at Film Canada’s Yonge Street office, without a trace of shame or apology.
"I make a film for audiences, and I want them to see it. I’m not like (Andy) Warhol,” he added. “I care about the audience. I really do.
"Most filmmakers in New York are making films for just themselves, or each other.”
Downey's concern is reflected in Chafed Elbows, an hour-long tour through a slaughterhouse dedicated to the dismemberment of the sacrosanct. Before it’s over, almost every conceivable sacred cow is butchered.
The focus of the of the plot’s action is Walter Dinsmore, winsomely portrayed by George Morgan. Despite his best efforts to accept, adapt and cope with the world’s incongruities, Walter can’t help getting hung up.
Institutions bother him, and all of them — including motherhood, medicine, art, advertising, authority, religion and culture — contribute to his frequent breakdowns, occurring  at two-month intervals.
Walter also has trouble with women. (All the female roles are played by the same actress — Downey’s talented wife Elsie — who makes each a distinct and separate entity.)
Walter’s women, from his mother to a weathergirl newscaster, are disturbed and disturbing caricatures.
Downey introduces another ubiquitous talent in Lawrence Wolf, seen as a recurring character in Walter’s fantasy life and heard in some 34 voice performances on the soundtrack.
Walter’s main problem — and the cause of considerable concern to Ontario’s censor board — is his relationship with his mother. Lightheartedly incestuous, mother has given her boy everything, including herself.
“If everybody could get turned on to not taking themselves too seriously and having a sense of humour about themselves, I think we could get over a lot of things that we take very, very seriously,” Downey said in a CBC interview during his Toronto visit. “We could approach the serious matters in a different way, like war, poverty, and all the things that are going on.”
Chafed Elbows is often brilliant, though occasionally obvious and cute. Downey has a refreshing if somewhat heavy-handed satirical sense.
"I just don't have a light touch," he admitted. "I hope the older I get, the sharper and more subtle I will get.”
Despite its cluttered appearance, Chafed Elbows is a  carefully made film, and stands well with its companion on the bill, the now classic short Scorpio Rising.
Followers of the current motorcycle mania in commercial cinema should consider Scorpio Rising a must for an exploration of biker cults.
Anger’s work, despite its unsavoury subject matter, is intricately, sensitively composed. It remains beautiful in itself but also contains the filmmaker’s personal,  perceptive appraisal of the modern gang instinct.
Instinct, Downey believes, is an important ingredient in filmmaking. He is his own producer, writer and director.
"That's what's wrong with films today. Too much adapting from other people and other mediums,” he says, making his point in clipped, precise phrases.
"Technique is important. I want to know all I can about it.
“I’m a square, man,” he adds, sitting comfortably in his double-breasted suit, forgetting about the formula Hollywood "projects” he has turned down to film his own pictures.
"The middle class is all right with me.” CHAFED ELBOWS. Music by Tom O’Horgan. Written, produced and directed by Robert Downey. Running time: 63 minutes.

The above is a restored version of a Telegram review/interview by Michael Walsh originally published in 1967. For additional information on this archived material, please visit my FAQ.

Afterword: In 1965, Robert Downey was the co-producer (together with his wife Elsie) of Robert Downey Junior. They gave their boy his first acting job in director dad’s comic fantasy Pound, an adaptation of his off-off-Broadway play. Junior played Puppy, a towheaded mutt hoping to be adopted. Over the next few years, the father gave roles to the son in the features Greaser’s Palace, his 1972 satirical biography of Christ set on the American frontier, Moment to Moment (1975) and Up the Academy (1980). Thereafter, the youngster made his own way forward, most recently playing a billionaire superhero called Iron Man in a bunch of really expensive comic-book movies.
The Robert Downey that I met in 1967 was part of a very different movie moment. He visited Canada representing a generation of U.S. artists and innovators who were questioning the established order that considered Hollywood as the world’s film capital and industrial filmmaking as the only creative model. It was a time when rebels were still comfortable wearing a shirt and tie, and the codes established to protect the profits of the major studios were under attack. Young writers and directors were questioning issues of social class, race and sexuality once considered out of bounds for neighbourhood theatre audiences.
Before bringing Chafed Elbows to Toronto, Downey gained underground notoriety for the 1964 feature Babo 73, perhaps the first cinematic satire of presidential sexual misconduct. In 1969, he gave us Putney Swope, the story of a Manhattan advertising agency that accidentally elects its token black board member as company chairman. Havoc (and outrage) ensued as the renamed “Truth and Soul, Inc.” refused to produce ads for tobacco, alcohol or toy gun manufacturers. The ads that it does produce are so socially disruptive that the government finds the corporation to be “a threat to national security.” And those pictures were made before he started heckling Christian scripture in Greaser’s Palace.
His cult notoriety notwithstanding, Downey missed out on the wealth and fame of many of his contemporaries. Though he was all right with the middle class, he seems to have made the upper class uncomfortable, with the result that his subsequent projects remained independent productions. Even the presence of his talented offspring RD Junior in featured roles did not generate major box office returns for the director’s comedies America (1986), Rented Lips (1988), Too Much Sun (1990) or Hugo Pool (1997). Native New Yorker Robert Downey turns 83 today (June 24)