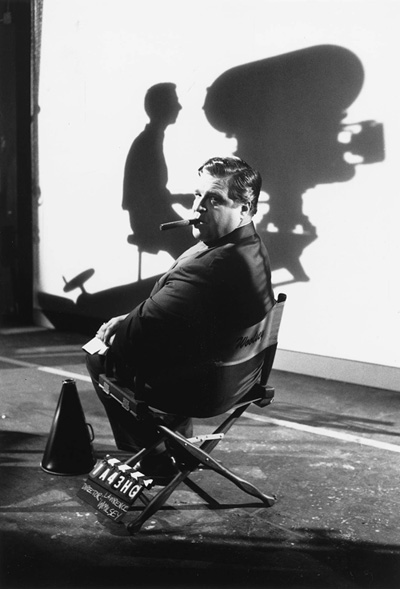 "Master of Shock" Lawrence Woolsey (John Goodman)strikes a William Castle-like pose on the set of his latest fright classic, MANT.

By the Bomb's Early Light


The late Christopher Hitchens said it well. "Like everyone else of my generation, I can remember exactly where I was standing and what I was doing on the day that President John Fitzgerald Kennedy nearly killed me." He was recalling not the Kennedy assassination, but the evening 51 years ago today (October 22, 1962) that the U.S. president went on television to inform the world that America was ready to go to war with Russia over missiles in Cuba. Given its profound impact on an entire generation, the crisis has figured in remarkably few films. While Thirteen Days (2000) was actually about it, the others, including Topaz (1969), The Steagle (1971), Blast from the Past (1999) and The Good Shepherd (2006), merely feature it as a plot element. Then there's the wonderful Matinee (1993), in which director Joe Dante combines a spot-on evocation of the boom generation's coming of age with a heartfelt tribute to great gimmick-movie-maker William Castle.

Friday, January 29, 1993.
MATINEE. Written by Charlie Haas. Inspired by the life and career of William Castle. Music by Jerry Goldsmith. Directed by Joe Dante. Running time: 98 minutes. Rated Mature with the warning "occasional coarse language."
FEEL THE THRILL.
"Yes," the man on the movie screen says with cheerful menace, "the atomic bomb is terrible." Down at Key West's Strand Theatre, affable Hollywood showman Lawrence Woolsey (John Goodman) is promising scary stuff.
Next Saturday, the Master of Shock will preview "his greatest thrill process, AtomoVision." The latest in horror technology, it's ours for the price of one Matinee admission.
Feel the chill as the man on the television screen offers even more menace. In director Joe Dante's best movie ever, 15-year-old Gene Loomis (Simon Fenton) watches a presidential address with silent attention.
"It shall be the policy of this nation to regard any nuclear missile launched from Cuba against any nation in the Western Hemisphere as an attack by the Soviet Union on the United States, requiring a full retaliatory response upon the Soviet Union."
To this day, I remember the words Jack Kennedy used on the night of October 22, 1962. With measured phrases, he was promising the end of the world.
To this day, I feel the chill of that moment whenever it is recalled in a television documentary or feature film.
We all remember where we were on the day that Kennedy nearly killed us.
Matinee, Dante's measured, heartfelt Missile Crisis memoir, perfectly recalls the thrills and the chills of the boom generation's coming of age. A film buff with deep affection for 1950s-style creature features, Dante combines high school teen comedy with a warm, knowing tribute to the greatest gimmick film-maker, William (The Tingler) Castle.
It introduces us to soulful navy brat Loomis, the new kid at Harry S Truman High. Loomis becomes a minor celebrity when his classmates learn that his dad is on duty on a blockade ship.
Loomis is looking forward to Saturday, and a personal appearance by the legendary (and Castle-like) Woolsey. A fan of Woolsey's hype-and-run movies, he will find an unexpected friend in the avuncular showman and a welcome soulmate in outspoken classmate Sandra (Lisa Jakub), the skeptical, nonconforming daughter of beatnik parents.
Dante, creator of the Gremlins movies, is in love with the era, its people and its pop culture. Here, he produces an evocative, comic The Way We Were for the duck-and-cover generation.
Seen through the lens of memory, the anxieties we survive become nostalgia. And what, after all, did all those movies really teach us?
"That atomic power is nothing but trouble . . ." says Big Bob (John Sayles), a "protester" paid to drum up interest in Woolsey's movie. ". . . and it's all right for monsters to rip the clothes off of young women."
As Woolsey, actor Goodman exudes the warmth and wisdom of the ail-American con artist. Empathic and even eloquent, he reveals the secret of the universe to lonely Gene.
"You think that grown-ups know what they're doing? That's a hustle, kid. They're making it up as they go along, just like you."
Well, maybe you had to have been there.
I was, and I love Dante's version of it.

AFTERWORD: Yes, I was paraphrasing Hitchens's introduction to his 1983 Spectator piece "Kennedy Lies" (included in his essay collection Prepared for the Worst, published in 1989). Today, we've all taken Lawrence Woolsey's wisdom to heart, and understand that most of what we hear from "grown-ups" — read presidents, politicians and pundits — is self-serving hustle. Beyond that, though, Matinee remains a favourite film for its affectionate recollection of B-movie maker William Castle, the model for "Shock Master" Woolsey. Between 1958 and 1965, the showman/director released 10 films, each one accompanied by a "gimmick" designed to draw in the teen audience. The first of them, 1958's Macabre, insured patrons against "death by fright." Thereafter, such processes as Emergo (House on Haunted Hill, 1959), Percepto (The Tingler, 1959) and Illusion-O (13 Ghosts, 1960) promised patrons direct involvement in their movie's shocks. In 1961, Homicidal included a minute-long Fright Break before the finale, during which film-goers too scared to sit through to the end were encouraged "to follow the yellow streak to the coward's corner," where their money would be "sneerfully refunded." I saw every one of those pictures and share Matinee director Dante's regard for the man who made them. In 1973, when I was offered the opportunity to interview Castle on the set of a picture he was filming in B.C., I accepted in a heartbeat.