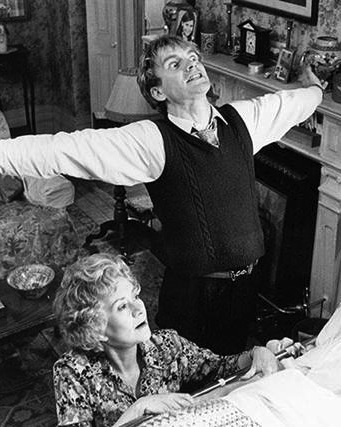 By the flesh betrayed


An angel of mercy with an unholy agenda


Dennis Potter did not go quietly into that final darkness. The son of a Gloucestershire coal miner, the former newspaperman used his last interview to call out son of privilege Rupert Murdoch for his crimes against journalism. "There is no one person more responsible for the pollution of what was already a fairly polluted press," he told BBC interviewer Melvyn Bragg in March, 1994. "And the pollution of the British press is an important part of the pollution of British political life, and it's an important part of the cynicism and misperception of our own realities that is destroying so much of our political discourse." An insightful, famously angry screenwriter, the terminally-ill Potter would be dead 12 weeks later. "I call my cancer Rupert, so I can get close to it," he told Bragg. "Because that man, Murdoch, is the one who, if I had the time . . . I would shoot the bugger if I could." Today [April 17], on the 79th anniversary of his birth, Reeling Back recalls the dramatist whose dark view of the human condition produced such compelling musical fantasies as Pennies from Heaven and The Singing Detective. A great mind betrayed by a chronically ill body, Potter explored the theme of betrayal in his most disquieting work, 1982's Brimstone and Treacle.

Wednesday, February 2, 1983.
BRIMSTONE AND TREACLE. Written by Dennis Potter. Music by Michael Nyman, with songs by The Police, Sting and The Go-Gos. Directed by Richard Loncraine. Running time: 85 minutes. Restricted entertainment with the B.C. Classifier's warning: "occasional nudity and sex." THERE'S SOMETHING NOT nice about Dennis Potter's sense of humour. A British screenwriter with a particularly unwholesome world view, he works in a style that might be described as "demented (Harold) Pinteresque."
What Potter offers filmgoers are baroque banalities, moral tales illustrating the theme of hypocrisy as its own punishment. North American audiences first encountered him through his musical fable Pennies from Heaven.
In Pennies, Potter showed us a man fatally divided against himself. Arthur Parker (Bob Hoskins in the 1978 British TV mini-series; Steve- Martin in the 1981 Hollywood film version) was a Depression-era song plugger with a desperate need to believe in the idealistic sentiments expressed in the pop tunes of his day. At the same time, he wants to give free rein to all of his baser passions.
That mixture of Brimstone and Treacle also churns within Thomas Bates (Denholm Elliott), the tortured soul featured in Potter's current movie. A cheerless hypocrite, Bates runs a small ecclesiastical publishing house, where he composes verses for his line of sympathy cards.
Bates suffers terrible guilt for reasons that are revealed to us when his life is invaded by a random demon named Martin Taylor (Sting, aka Gordon Matthew Sumner). A predatory monster, Taylor is the sort of con artist who insinuates himself into people's wallets and homes by insisting that he's an auld acquaintance who's been forgot.
In Bates's case, Taylor immediately picks up on an anxious reference to a daughter, Pattie (Suzanna Hamilton). Knew her at art school, he says. Courted her. Still in love with her.
In more straightforward hands, Brimstone and Treacle might have developed into a simple suspense thriller,  or perhaps a psychological drama. Potter, however, pushes his material into the realm of metaphysical fantasy, with overtones of nasty black comedy.
Pattie is a beautiful, bedridden, brain-damaged vegetable. Though her mother, Tom's wife Norma (Joan Plowright), continues to hope for a miracle, Tom has no faith left.
Potter reveals, by way of a surreal nightmare sequence, that Tom believes that his marital infidelities led to Pattie's accident. Adding to his guilt are his unspeakable incestuous longings.
Martin gains Norma's confidence by portraying himself as an angel of mercy, who wants nothing more than to minister to their poor, beloved daughter. When they kneel to pray together, though, the special effects department whips up the sort of thunder and lightning display usually reserved for occult incantations.
What Potter is building up to is the sexual violation of the helpless young woman, which, in the overall context of this picture, amounts to a therapeutic rape. Whether or not filmgoers find this funny will depend on how much humour they find in the picture's pervading mood of gothic grotesque.
According to one source, Potter originally wrote Brimstone and Treacle as a 1976 BBC teleplay. Though produced, the broadcasters backed off on airing the piece because they considered Potter's tone "blasphemous."
Subsequently, Potter got together with Richard Loncraine (director of Michael Palin's 1982 comedy The Missionary) to produce this uncompromising theatrical feature.
And, who knows? The resulting bit of Grimm wit may actually become a cult favourite.

Afterword: Produced and shelved by the BBC in 1976, Brimstone and Treacle finally made it to the air in 1987, five years after the movie adaptation. It was also spun off as a 1977 stage play, premiered at Sheffield's Crucible Theatre. Potter's subsequent film credits include an adaptation of Martin Cruz Smith's thoughtful mystery novel Gorky Park (1983), and his own original Dreamchild (1985), in which an elderly Alice Hargreaves recalls her younger self's off-centre relationship with Oxford clergyman Charles Dodgson. As Lewis Carroll, he sent her to Wonderland. In 1987, he reworked his mid-1970s teleplay Schmoedipus for director Nicolas Roeg, whose Track 29 (1988) was an exploration of family madness with Oedipal overtones. Potter died in 1994, shortly after making clear his opinion of media mogul Rupert Murdoch. He missed seeing The Singing Detective brought to the screen by actor Mel Gibson's Icon Entertainment. Released in 2003, the picture starred Robert Downey, Jr. and a playlist of 1950s songs.