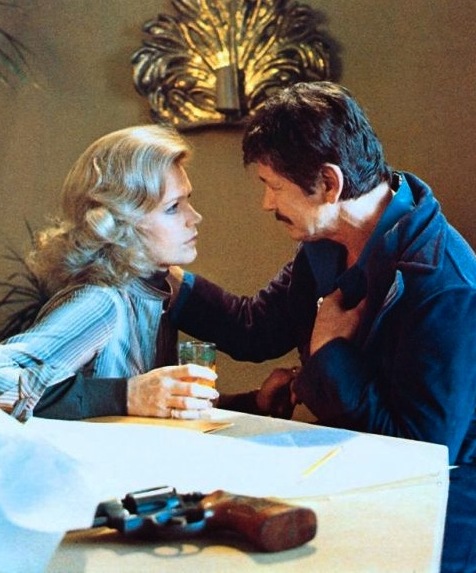 Major Borzov (Charles Bronson) confides in Barbara (Lee Remick) because she is a fellow KGB agent . . . or is she a CIA double agent?


Bronson sent to put down the Telefon


By all accounts, Charles Bronson was not a political person. Born Charles Buchinsky on this day (November 3) in 1921, he was a coal miner and a Second World War airman before he took up acting. By 1954, he'd already appeared in 21 feature films. That year, with Senator Joseph McCarthy's communist witch-hunt at its height, Buchinsky's agent suggested a less Russian-sounding name might be wise, and Charles Bronson made his screen debut. Another 73 features would follow (as well some 65 TV series and movie roles), among them a film that has new resonance in light of recent revelations about American spying on, well, everybody. As of this posting, the U.S. President appears to be denying any knowledge of the fact that his intelligence agencies were bugging the cellphone of Germany's Chancellor. Were the spymasters keeping their boss in the dark? Now, consider Telefon, the 1977 Don Siegel thriller in which Bronson plays a Soviet spook dispatched to the U.S. to deal with a problem that could seriously disrupt the new detente between the superpowers. To quote our motto here at Reeling Back: Everything Old is News Again.

Thursday, January 19, 1978.
TELEFON. Written by Peter Hyams and Stirling Silliphant, based on the 1975 novel by Walter Wager. Music by Lalo Schifrin. Directed by Don Siegel. Running time: 102 minutes. Mature entertainment with the classifier's warning: some violence. IT'S NICE TO BE RIGHT. Few things are quite so satisfying as being able to say (with quiet but justifiable pride): I told you so.
Almost 10 years ago [June, 1968], I reviewed a Ken Russell film called The Billion Dollar Brain. It was a spy thriller, the third in the Harry Palmer series produced by Harry Saltzman.
At that time, Saltzman was at the peak of his success. The Canadian-born film-maker had created both the James Bond and Palmer pictures for an apparently spy-mad audience. He seemed to have his finger firmly on the public pulse.
My favourite character in Billion Dollar Brain was a rascally old Russian colonel named Stok, a role played with Khruschevian expansiveness by Oscar Homolka. Since he had it all over the brooding Palmer (played by Michael Caine), I looked forward to his eventual return.
"The colonel seems ready for a movie of his own,'' I wrote at the time. "Perhaps innovator Saltzman (is) preparing his public for a new development, a Soviet spy hero."
Welcome Major Grigori Borzov (Charles Bronson), agent of the KGB and the hero in Telefon. Detente must be real, for the Soviet spy hero has finally arrived.
His sponsor is not producer Saltzman, but the near-legendary director Don Siegel. The man who created such urban action classics as Coogan's Bluff (1968) and Dirty Harry (1972), both with Clint Eastwood, now gives tough guy Bronson one of his best roles ever.
The current film offers espionage fans a breathless update on The Manchurian Candidate (1962). We learn that in the wake of the 1960 U-2 incident,