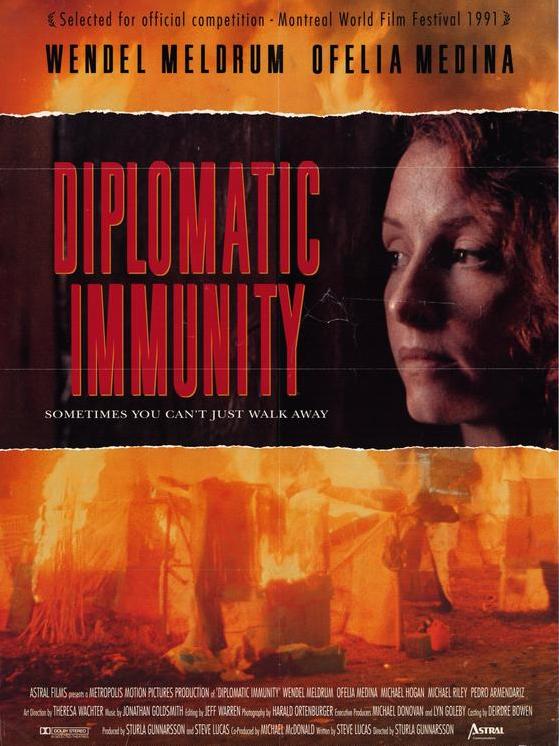 
Making the choice not to walk away


Born on this day (April 15) in 1958, Wendel Meldrum took home a Canadian Screen Award in 2013 for her achievements as a TV comedienne. Some years earlier, she demonstrated an impressive talent for drama in director Sturla Gunnarsson’s 1991 political thriller Diplomatic Immunity.

DIPLOMATIC IMMUNITY. Written and produced by Steve Lucas. Music by Jonathan Goldsmith. Directed by Sturla Gunnarsson. Runing time: 94 minutes. Rated 14 Years Limited Admission with the B.C. Classifier’s warning "some violence, occasional very coarse language and suggestive scenes.” CANADA IS IN BED with the United States.
The scene, played out in the cool light of a Central American morning, needs no dialogue. Canadian Kim Lovell Dades (Wendel Meldrum) has spent the night with American Les Oberfell (Michael Riley).
On assignment in El Salvador, Dades represents Ottawa's Department of External Affairs in the administration of Canada's humanitarian aid programs. Oberfell works for the U.S. State Department (or is it the CIA?) as a "human rights" adviser to the Salvadoran military.
Self-satisfied and somewhat sanctimonious, Dades believes in her country's independent foreign policy. On this morning, Oberfell, a considerate lover, leaves her sleeping quietly.
Only later will he issue Kim her wake-up call. "You (Canadians) spend your entire lives hiding behind our (American) skirts," he tells her during a moment of crisis.
"When is the last time Canadians made a difference anywhere except in their own goddamn minds?"
Thirty-one years ago [1960], in a book called Peacemaker or Powder-Monkey, legendary journalist James M. Minifie argued the case for Canadian political neutrality. Peacekeeping, a concept invented five years earlier by Canada's Nobel Prize-winning diplomat Lester B. Pearson, was at the height of its popularity.
A realist, Minifie warned that without some dramatic changes in its foreign policy, Canada would become a U.S. client state and a spear-carrier ("powder-monkey") for U.S. interests internationally.
This year [1991], Ottawa dropped its last pretence of  innocence. By rushing to join the American "coalition" in the Persian Gulf, the [Brian] Mulroney government acknowledged Canada's role in the [George H.W.] Bush administration's new world order: Geopolitical slut servicing Uncle Sam.
In his heartfelt first feature, director Sturla Gunnarsson makes the point more elegantly. As written by his longtime television production partner Steve Lucas, Diplomatic Immunity tells the story of a career foreign service officer whose loss of innocence becomes a crisis of conscience.
Sent to El Salvador to prepare the way for a ministerial visit, Kim Dades discovers a reality very different from that of neat diplomatic dispatches. Canada's senior local agent, the profoundly disillusioned Jack Budyansky (Michael Hogan), advises her that "sometimes you just have to walk away."
By contrast, committed Catholic social worker Sara Roldan (Ofelia Medina) insists that she "put your energy into something you believe in.” Shy, apparently sincere Oberfell lurks in the shadows, something of a mystery.
With a documentarist's eye for detail, Gunnarsson balances elements of political thriller and consciousness-raising social drama. The result is Canadian story-telling in the honourable tradition of 1986’s Salvador, Missing (1982) and Under Fire (1983).

Afterword: Sturla Gunnarsson’s nuanced and still-relevant debut feature had the bad luck to be released a few weeks after a dumb American action film also called Diplomatic Immunity. A low-budget revenge thriller, it was directed by Peter Maris, who specialized in such forgettable cheesefests as Delirium (1979), Ministry of Vengeance (1989) and Zombie Hunters (2007). Fortunately, the folk responsible for the annual Genie Awards were able to tell the difference, and Gunnarsson’s picture was nominated in four categories.
Wendel Meldrum had made a big impression on me a year earlier. In the 1990 historical drama Beautiful Dreamers, she’d played Jessie Burke, the wife of Canadian mental health reformer Maurice Burke (Colm Feore). In my review, I said that Meldrum’s performance gave director John Kent Harrison’s film its soul. It was her first big-screen starring role, and she followed that with a second star turn in Diplomatic Immunity (the watchable one). I expected to see a lot more of her in the movies. I was disappointed when her career went in a different direction.
Originally a dancer, the Italian-born Meldrum had become a stage and television actor in the mid-1980s, finding steady work in the Los Angeles area. After making two Canadian features, she returned to TV acting, but with more working visits north of the border. I find it interesting that her Wikipedia biography considers her “best known for her role as the 'low talking' designer” on a 1993 Seinfeld episode. Canadians may be forgiven for preferring her as Anne Blecher, her starring role in the four-season, Winnipeg-made HBO-Canada series Less Than Kind (2008-2013).
Another thing I find interesting is the fact that she seems best remembered for her work as as a comic actor. I can hardly fault her for wanting to make people laugh, though, and hope she enjoys a giggle or two today, her 59th birthday.