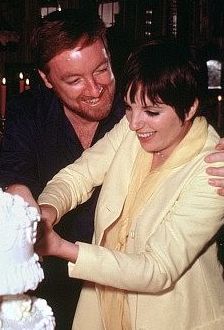 
Recalling a time when movies sang


The son of movie song-and-dance man Jack Haley, Jack Haley, Jr. made his mark behind the camera as a documentarist. Born on this day (October 25) in 1933, he’s best remembered as the writer, producer and director of the 1974 celebration of the M-G-M musical, That’s Entertainment!.

THAT'S ENTERTAINMENT! Selected scenes from 68 musical feature films produced by the Metro-Goldwyn-Mayer studios between 1929 and 1958. Music by Henry Mancini. Conceived, written, produced and directed by Jack Haley, Jr. Running time: 132 minutes. Rated General entertainment.
"THANK GOD FOR FILM," says a nearly tearful Liza Minnelli during her turn as hostess-narrator of That's Entertainment! "It can capture a performance and hold it there forever."
Miss Minnelli, the actress-daughter of a director-father and superstar-mother, says it all. Funny moments and moving moments, silly moments and stunning moments, familiar moments and completely forgotten moments are the charged particles that set off this memorable musical blockbuster.
It’s “more than a movie," say the ads. "It's a celebration."
Well, for once the ads don't lie. They don't even exaggerate.
Made to coincide with the golden anniversary of M-G-M, That's Entertainment! is a film that's difficult not to love and impossible not to like. Warm, affectionate, imaginative and witty, it's a tribute to an era of joyful movie-making.
The project was conceived and directed by TV documentarist Jack Haley, Jr., the son of actor Jack Haley (who, as the Tin Man, skipped down the Yellow Brick Road beside Judy Garland in 1939’s The Wizard of Oz).
Haley, Jr. is said to have personally screened more than 200 movies in his search for material. The present film contains the fruits of his labour, the choicest plums from 68 features and five short subjects made between 1929 and 1958.
Knitting it into a pattern are 11 host-narrators who offer their personal reminiscences, identify film clips and provide colour commentary. Some, like James Stewart, Bing Crosby, Gene Kelly and Fred Astaire, are gracious and whimsical. Some, like Peter Lawford, Donald O'Connor, Debbie Reynolds and Mickey Rooney, are nostalgiac and wistful.
Less likeable are Frank Sinatra, who, despite his superstar status, comes across as a surly, mean-minded man, and Elizabeth Taylor, whose unctuous over-sincerity would look more appropriate in a laxative commercial.
It’s the movies that matter, though, and most of the hosts have particular stories to tell about the business of making musicals. Kelly, for example, pays tribute to Astaire who, in his segment of the film, returns the compliment with a tribute to Kelly.
The film's funniest segment, and well worth the price of admission on its own, is James Stewart's winning look at some of Hollywood's biggest non-musical stars in musical movies. The sequence includes glimpses of Clark Gable, Jean Harlow, Robert Montgomery, Joan Crawford and Cary Grant singing and dancing their way to instant obscurity as musical entertainers.
The most poignant sequence in the film is narrated by Liza Minnelli, paying tribute to her mother, Judy Garland. Not of the generation that performed in the great M-G-M musicals, she stands in for the new audience, the thousands that will be seeing most of these scenes for the first time.
During her turn she relates one of the film's most affecting stories. "Mama once told me that M-G-M seemed obsessed with Shirley Temple," she says. On screen, we see the teen-aged Judy Garland dancing in a frilly, Shirley Templish dress in a clip from Broadway Melody of 1938.
She tells how the studio once planned to build a musical around Miss Temple and offered to release its own top stars, Clark Gable and Jean Harlow, to Twentieth Century-Fox in exchange for her services. Fox refused, and so a relatively unknown contract player got to play the part of Dorothy in the unforgettable Wizard of Oz.
A TV director with five Hollywood film-clip specials to his credit, Haley, Jr. wins full marks for his handling of the material that makes up That's Entertainment!
His movie opens with a dedication to "the thousands of people . . . artists, craftsmen and technicians . . . who poured their talents into the creation of the great M-G-M musicals."
And he keeps faith with them. Instead of offering audiences mutilated pictures, he varies the size of the image on the screen, showing the virtually square screen of the 1930s and 1940s as it was, and the super CinemaScope of the 1950s as it was.
That's Entertainment! is a compilation of movies that were made for movie theatres. It's a film that works in ways that no TV retrospective could hope to match precisely because it is being shown on a theatre's blessed big screen.
It works as nostalgia, as social documentary, as magic show and as unashamed entertainment. That's Entertainment! runs for two hours and 12 minutes.
The best thing I can say about it is that it was over much too soon.

Afterword: Ah, nostalgia. That’s Entertainment! opens with the words “Beginning our next 50 years” on the screen. In fact, it was celebrating a glory that would never return for the financially-troubled studio. Metro-Goldwyn-Mayer’s motto, Ars Gratia Artis (Art for Art’s Sake), displayed on its corporate logo, became a hollow joke as ownerships changed and priorities shifted away from the production of motion pictures. When it filed for bankruptcy in 2010, it was a subsidiary of a Delaware-based holding company. A documentary focused on those “next 50 years" would be a chronicle, not of memorable movie moments, but of complex business manoeuvres, real-estate speculation and asset sales.
In keeping with my preference for movies with happy endings, let me note that on September 15, 1974, three months  after the national release of That’s Entertainment!, the Tin Man’s son married Dorothy’s daughter. A Hollywood marriage, the union of Jack Haley, Jr. and Liza Minnelli was brief, and the couple divorced in 1979, the year that director Gene Kelly released his take on the M-G-M musical moment, That’s Entertainment, Part II. Haley returned to the well again in 1985, writing and directing That’s Dancing!, focused on the art of the dance in movies. That’s Entertainment! III (1994) arrived on the 20th anniversary of Haley’s original feature. Team written and directed by Bud Friedgen and Michael Sheridan, it offers a “hidden history” of M-G-M by building its story on outtakes and scenes that didn’t make it into the final films.