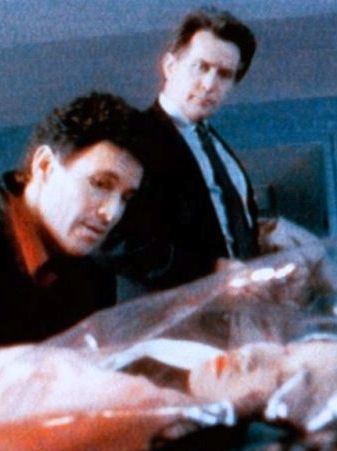 
Script a minute short of hard-boiled


Born in Vancouver on this day (January 24) in 1946, Michael Ontkean grew up in Toronto, where his career options included professional hockey. He chose acting instead and, on a visit to his old home town, played a Mounted Policeman named McKenzie in the 1989 spy thriller Cold Front.

Thursday, April 12, 1990.
COLD FRONT. Written by Sean Allan and Stefan Arngrim. Music by Braun Farnon, Craig Zurba. Directed by Paul Bnarbic (Allan Goldstein). Running time: 93 minutes. Mature entertainment with the B.C. Classifier's warning: some violence, occasional coarse and suggestive language. MOSCOW IS NOT PLEASED.
One of its top contract killers has developed an annoying idiosyncrasy.
It showed up earlier this week, during a round of terminations in Hong Kong. Dominic Mantha (Kim Coates) is "killing a woman with each target," says KGB station chief Alexi Zoubov (Jan Rubes).
That makes him "an assassin with a signature," and a danger to his masters.
Washington understands.
George Chaney (Dale Wilson), Zoubov's CIA counterpart in the one city in the world considered neutral ground by both sides, agrees that the mad Mantha must be eliminated.
The highest ranking spooks cut their deal on a fishing boat within sight of that city, a metropolis code named Cold Front. Local filmgoers will recognize the postcard-perfect skyline as that of . . .
. . . VANCOUVER!??
Filmed here in late 1988, Cold Front is no Hunt for Red October. Even so, it stands a good chance of becoming a cult hit in B.C.
It has all the right midnight matinee ingredients. First, and most importantly, it was not made as a cult item.
Director Paul Bnarbic (a pseudonym for Brooklyn-born Allan Goldstein, who insisted that his name be removed from the film) set out to make a commercially successful thriller.
In the process, screenwriters Sean Allen and Stefan Arngrim provided him with an idea as outrageous as it was original.
"Vancouver," we're told in the film's opening narration, "is a major staging area for spies."
This is genuine cult stuff, an idea that doesn't just push the narrative envelope, it shreds it.
Played dead straight by name actors, Cold Front enhances its cult credentials with dialogue worth quoting at parties, and scenes that beggar the imagination.
Vancouver's best-kept secret is discovered by honest cop John Hyde (Martin Sheen). A veteran American Drug Enforcement Agency officer, he's in town on an exchange with the Royal Canadian Mounted Police.
Partnered with hot-dogging young Mountie Derek McKenzie (Michael Ontkean), Hyde is investigating a murder that turns into something bigger.
The dialogue is a few minutes short of hard-boiled. Even so, Sheen's descriptions of Vancouver ("Disneyland with rain") and his hotel ("some armpit on Hastings") are hilariously ripe.
Then there's his banter with his ex-wife, saloon singer Amanda O'Rourke (Beverly D'Angelo). She's the thrush at the Rickshaw Club, a nightspot known as "the haunted house" because of its spooky clientele.
Among this picture's memorably over-the-top scenes is Ontkean's mad Mel Gibson impression during a waterfront drug bust. In another, Sheen makes a tense dash through a sewage tunnel linking the East Side docks with Granville Island.
As unlikely as its geography, Cold Front is the best good-bad movie to come out of Vancouver since 1975's Russian Roulette.

The above is a restored version of a Province review by Michael Walsh originally published in1990. For additional information on this archived material, please visit my FAQ.

Afterword: A guilty pleasure, Cold Front is a picture that I actually bought when it was released on video tape (but not until it found its way into the discount bin). To this day I have no idea why director Goldstein distanced himself from this (unintentional) comic gem, especially given that his later career highlights include such items as the Charles Bronson epic Death Wish V: The Face of Death (1994) and 2001: A Space Travesty, a Leslie Nielsen comedy from 2000. Released in the dying days of the Cold War, Cold Front's lunatic conceit — Vancouver as the place the world's spies gathered to kick back off the clock — was a notion with Rocky Horror Show potential. Embraced and properly promoted, it might have found success with a generation in tune with the ironies that abound in the age of the Internet.