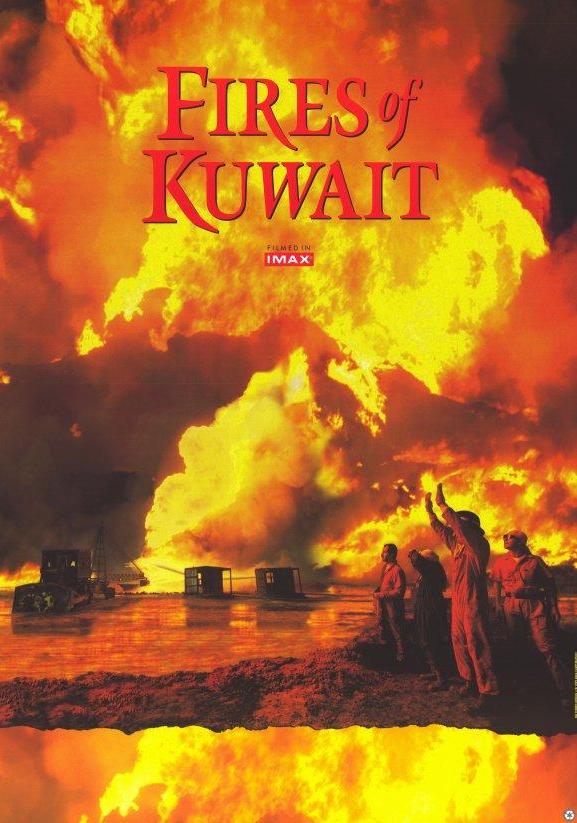 The inferno that followed 1991’s Gulf War is featured on the poster for director David Douglas’s 1992 IMAX documentary Fires of Kuwait.


On this day (February 23) in 1991, retreating Iraqi forces committed an historic act of arson. The fight to put out the blaze, an action that international firefighters called “Operation Desert Hell,” was recorded by director David Douglas in his documentary Fires of Kuwait.

FIRES OF KUWAIT. Documentary recording the 1991 effort to extinguish oil well fires in the Persian Gulf emirate. Music by Michael Brook. Photographed and directed by David Douglas. Running time: 36 minutes. Presented in the IMAX format. WHAT A PIECE OF WORK is man!
On February 23, 1991, U.S. President George Bush's Operation Desert Storm ended with the desert ablaze. True to his word, Iraq's Saddam Hussein ordered the destruction of the Arabian Gulf oilfields that his forces had occupied, but could not hold.
Man made a disaster.
Beneath a smoke-blackened sky, the flames from more than 600 burning wells provided the only "natural" light in much of liberated Kuwait.
Man would work miracles.
During the next nine months, 200 civilians from 10 countries fought the unprecedented conflagration, each day demonstrating that rare combination of ingenuity and daring that is true heroism.
Filmed in late September, 1991, Fires of Kuwait evokes anguish and a sense of awe. Director David Douglas's report on the firefighters' victory skilfully uses the close-up potential of the giant screen IMAX process to turn our eyes into our very souls.
No accident, this inferno was the result of arson.
How can the Creator not despair of beings so hell-bent that they apply their intelligence to the manufacture of "smart" weapons, the practice of "surgical" warfare or, in vengeful response to defeat, wanton mass destruction?
It must be because of the handful of genuine hellfighters. Douglas's film pays tribute to them, the professionally fearless few who demonstrated Billy Bishop's famous "courage of the early morning" all day, every day.
Though experts predicted that the job would take between five and ten years, the Texans and Albertans who led the effort were quick studies. Joined by teams from Britain, France, China, Hungary, Romania, the U.S.S.R. and Iran, they had all the fires out by the end of November.
Doubling as his own director of photography, Douglas got as close to the action as the actual firemen. As a result, filmgoers are crouched down with Houston's Wild Well Control team as they snuff out a blaze with a 110-kilogram explosive charge.
"Texans," says narrator Rip Torn, "have been dynamiting oil fires for over 50 years." Other fire-control methods were invented on the spot, including a wonderfully symbolic contraption called "Big Wind."
Conceived by the Hungarian fire fighters, it consists of two MiG 21 jet engines atop a Soviet T34 tank body. When water is injected into the jet stream, we see this reconfigured bit of war machinery blow out a fire.
Without pretence or preaching, Douglas's picture puts us into the middle of a tragedy brought about by miscalculation and malice. He then shows the triumph of those who put their lives at risk to set it right.
"The pain of the past," we're told with simple eloquence, "is truly wasted if we fail to learn from it." By so effectively honouring the Gulf War's real heroes, Douglas looks towards a day when we can say “what a work of peace is man.”

Afterword: Among the first responders to Kuwait’s blazing inferno was the Texas-born Paul “Red” Adair, the world’s most celebrated oil well firefighter. Adair and his company were already famous as the inspiration for director Andrew V. McLaglen’s 1968 adventure film Hellfighters. It starred John Wayne, whose character Chance Buckman was based on Adair. In the movie, the swashbuckling Buckman battles an oil field conflagration in Venezuela while under attack from left-wing rebels. The iconic action star died in 1979, at the age of 72. The real-life Adair was 75 when he led his team into Kuwait. He died in 2004, just 10 months short of his 90th birthday.
Edmonton-born cinematographer David Douglas became part of the IMAX team during the big-screen film producer’s early days. In interviews, he has recalled participating in the assembly of the IMAX projector for Ontario Place in 1971, site of the company’s first permanent commercial installation. As a cinematographer, he was part of the IMAX Space Team, the group created by company co-founder Graeme Ferguson to work with NASA on such documentaries as 1982’s Hail Columbia!, The Dream Is Alive (1985) and Blue Planet (1990). Among Douglas’s duties was the training of astronauts in the operation of the IMAX cameras they used during shuttle missions. He made his directorial debut with Rolling Stones: Live at the Max (1991), a concert feature and the first IMAX entertainment movie. Fires of Kuwait came a year later, earning Douglas an Oscar nomination for his documentary feature. Together with partner Diane Roberts, Douglas founded West Eagle Films, a B.C.-based production company specializing in large-format movies. Last year, he took part in celebrations at the Royal British Columbia Museum marking the launch of a new projection system in Victoria's IMAX Theatre.