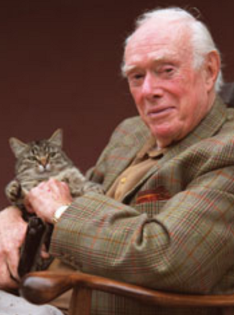 A relaxed PIERRE BERTON shares some quality time with his cat Ruby in a photo taken circa 2000.


Communications shape who we are


He was Canada’s national dreamer. Born on this day (July 12) in 1920, Pierre Berton recognized that our country’s future was not set in stone. In the aftermath of the Second World War, it was assumed that English-Canadian society faced a choice between imperialism (strengthening its traditional British connection) or continentalism (accepting the embrace of the United States). Born in Whitehorse, he was a product of the Northern frontier, a man of the margins who saw things differently. A journalist turned public intellectual, Berton saw a third way for Canada. In the 1960s, he became the face of the “new nationalism,” passionately promoting the idea of progressive independence. Convinced that great nations need great stories, he offered The National Dream, the first in a series of best-selling popular history books focused on Canadian achievements. Eventually, he turned his attention to the distorted images Canadians saw of themselves when they went to the movies. The result was Hollywood's Canada: The Americanization of Our National Image, the book that we talked about during a 1975 interview in Vancouver.

HUGH FAULKNER, CANADA’S SECRETARY of State, has a copy of Pierre Berton's new book, Hollywood's Canada: The Americanization of Our National Image. The book, a darkly humorous account of the ways in which American filmmakers have distorted our national image, was presented to him by Association of Canadian Television and Radio Artists (ACTRA) administrator Jack Gray late in September.
Gray, who is also chairman of this year's [1975] Canadian Film Awards, was in Ottawa with a five-man delegation from the Council of Canadian Filmmakers (CCFM). "Gray phoned me up," Berton told The Province in an interview, "and said, 'we want to take your book up and give it to Faulkner. Would you inscribe it suitably?' "
Berton would. "I said: To the Secretary of State, Hugh Faulkner. Please read pages so-and-so, so-and-so about the Canadian Cooperation Project in the hope that you won't make the same mistake that was made by Donald Gordon and C.D. Howe in 1947."
Berton was directing the cabinet minister to one of the most instructive chapters in the 303-page book, the story of how the American film industry once headed off federal plans to inaugurate a movie quota system with little more than empty promises and a high-powered public relations program. According to Berton, the new voluntary quota announced by Faulkner in early August [1975] "is the same thing."
"It's the (theatre) chains getting in and getting a lot of kudos for doing something that is only one third of what the government would have done if it had forced a compulsory quota on them."
Berton, 55, was here to deliver the opening address in the Vancouver Institute's fall lecture series. A columnist and broadcaster, he is, perhaps, best known as the author of The Last Spike and The National Dream, the story of the building of the Canadian Pacific Railway.
His latest book, Hollywood's Canada, has been generating its greatest interest among film buffs. But, says Berton, "it's not a book about movies and it's not a book for movie buffs.
"This is a book about the Canadian image. It's a nationalistic book. And that, I suppose, is in the mainstream of what I have been writing.
"It's a logical follow-up to the four history books I wrote, because its about Canadian history and about the Canadian psyche, Canadian attitudes and social mores. When you're writing about how they were distorted, you have to write about how you feel they really are. It's a book about the Canadian image, wrong and right."
In the 19th century, transportation made us what we were, and that was the general theme of the railway books. In the 20th century, we are shaped by our communications.
"I said that in a brief to the CRTC several years ago, when we were talking about preserving Canadian television. Today television networks are doing what the railways did a century ago.
"We're a long country," he said, "strung out like beads on a string. It used to be the railway that held us together. Now it's wire and electronic things like cable and microwave relays."
Before television, of course, we took our self-image from the movies. "What started me on this (project) was a picture called The Far Country (a 1955 western in which James Stewart cleans up the “lawless" Yukon). That, and Canadian Pacific (1949), and Northwest Mounted Police (1940).
"What really got me going was Canadian Pacific with Randolph Scott, and then seeing (director Cecil B.) DeMille's picture (Northwest Mounted Police) a year or so later on television and realizing that he'd conned me when I was 20 years old."
Despite his own passion for the project, Berton had trouble exciting his publisher. "I got the idea for the book about a year before I actually started in on it. I got discouraged trying it out on various people, and I couldn't get any interest at all from my publisher.
''People misunderstood what the book was about," he said. "They thought it was a book about Canadian movies, which it wasn't going to be at all. So, finally, I decided to hell with it, I'm going to write it anyway.'
"Now," he said, "everybody goes around saying 'gee, I wish I'd thought of that; that's a good idea for a book.' They said that about the CPR book, too," Berton recalled, "and about Klondike, and about every book l've written including the one I'm doing now. It's very hard for a writer to explain how he sees a book until he actually writes it himself."
One measure of Berton's success is the fact that Hollywood's Canada is November’s Book of the Month Club selection. "They are now very strongly nationalistic, and trying to pretend they're a Canadian outfit,'' he said with a touch of sarcasm.
"They've taken my last five books, I think."
That kind of success doesn't particularly impress Berton. "There's no money for authors in a book club selection. It gives you an audience, and it gives you publicity. The fact that it's a book club selection convinces people that it's a good book. They can't find out for themselves, apparently, so they use that as a yardstick. ''
The Book of the Month Club, like Time Magazine, maintains a token Canadian operation. Berton's book will not be offered to the club's U.S. members. "I won't even be published in the States, so far as I know."
But then, says Berton, "I've made no effort to get it published in the States. I don't think it's an American book. It's the sort of book that you might ship to some of the movie buff bookstores from Canada. But I don't think my U.S. publisher would want it.
"It don't think it is for an American audience," Berton said.
"And I don't really care. I don't write for an American audience, anyhow. l just write for Canadians."

Afterword: The 1967 establishment of a Canadian Film Development Corporation suggested that the federal government had finally become serious about creating a domestic film industry. Pierre Berton’s research made him skeptical. That there had been a “Canadian Cooperation Project” in 1947, a public-private agreement that overwhelmingly favoured U.S. business interests, made it clear that there were forces at work to prevent that from ever happening. It all had to do with the long-established accounting practice known as “domestic box office.”
Each week, a movie’s value was recorded in terms of its worldwide (overseas) and domestic (U.S. and Canada) earnings. Because Canada represented approximately 10 percent of those domestic dollars — often the difference between financial success or failure — Hollywood was not about to allow anything more than a service industry to flourish here. Berton’s note to Hugh Faulkner politely informed the Secretary of State that he knew the fix was in.
So did Canada’s filmmakers. For more than a decade, savvy directors such as Daryl Duke, William Fruet, and John Juliani as well as producers Budge Crawley, Ratch Wallace and Laurence Keane told me similar stories.
For Canadians of a certain age, the name Pierre Berton stirs memories of a nation on the brink of greatness. That it fell short is our fault, not his.

See also:  My review of Pierre Berton’s 1975 book Hollywood's Canada: The Americanization of Our National Image.