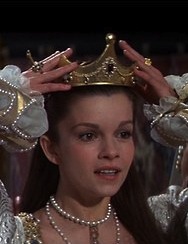 Henry VIII's second wife, Anne Boleyn (Geneviève Bujold), tries on the crown that she will lose, along with her head, within 1,000 days.


On this date (Jan. 25) in 1533, a pregnant Anne Boleyn exchanged wedding vows in London with the arguably still married English King Henry VIII. Just over 1,000 days later, accused of high treason, adultery, incest and witchcraft, Queen Anne would be tried and executed. During their short marriage, her sovereign husband separated the Church of England from the Roman Catholic Church, beginning the Protestant Reformation in Britain. Anne's daughter, whose sex so displeased Henry, would go on to become Elizabeth I. Irresistible as dramatic fodder, their story was turned into the Broadway hit of 1948 by playwright Maxwell Anderson. Because he focused on the adultery, illegitimacy and incest parts, his play was in serious violation of the motion picture production code of its time. As a result, Anne of the Thousand Days didn't make it to the screen until 1969. Reeling Back remembers it as the last of the era's big screen Tudor dramas, the one that led directly into television's age of royal romance — the six-part mini-series The Six Wives of Henry VIII on CBS in 1971, followed by Elizabeth R, the six-part hit of PBS's first season of Masterpiece Theater (1971). Glenda Jackson, as Elizabeth, had just the right look to play the daughter of Geneviève Bujold's fiery Anne.

Thursday, February 26, 1970
ANNE OF THE THOUSAND DAYS. Written by Bridget Boland and John Hale, based on Richard Sokolove's adaptation of Maxwell Anderson's 1948 stage play. Music by Georges Delerue. Directed by Charles Jarrott. General entertainment. THE FILM INDUSTRY is a business built on myths. One of the most widespread is the belief that producers really have something to do with the process of movie making.
The idea has little basis in fact, as a look at the current Anne of the Thousand Days quickly proves. Anne, as Universal Studios are at pains to point out, is a Hal Wallis production. Wallis's name, along with that of actor Richard Burton, was selected as a major selling point of the film.
A few years ago, businessman Wallis did the bookkeeping for Peter Glenville, director of the successful 1964 screen adaptation of Becket, a moneymaker that starred Burton. (Nobody bothered to mention Wallis's run of Elvis Presley epics, a series that included such box-office blockbusters as King Creole, G.I. Blues and Fun in Acapulco.)
The Becket magic, apparently, was supposed to rub off on Anne. It didn't, for the simple reason that directors, not producers, make movies.
Anne's director, Charles Jarrott, is a man with television experience, but no previously recorded big screen credits. His telly-version of the complex Tudor politics surrounding Henry VIII's passion for the young Anne Boleyn resembles nothing more than period Peyton Place.
Jarrott's script, adapted from Maxwell Anderson's play, reduces matters of state to a series of rationales used by a lecherous monarch to ennoble his lust. England's Protestant Reformation is pictured as just another one of the ploys in Henry's campaign to seduce Anne.
The film is, of course, billed as a love story.
Unfortunately, the criticism that Anne flings at Henry — "You make love as you eat — with a great deal of noise and no subtlety" — is also true of Jarrott's direction.
The main source of noise is Richard Burton, thrashing about in the role of Henry VIII. Though Burton is still able to get into a costume, he hasn't really gotten into a part in some time. His Henry is shallow histrionics.
The supporting players, including Anthony Quayle, as the the king's worldly-wise old chancellor, Cardinal Wolsey, and John Colicos, as the ambitious Cromwell, are more dependable.
"Let sleeping kings lie, Thomas," advises Wolsey. "We'll see to the government of the country." Like good governors, they are solid, if unimaginative.
If there is any real reason to see Anne of the Thousand Days, it is Geneviève Bujold. The Quèbècoise actress is the very life of the movie, filling every scene she appears in with fire and vitality.
While her co-star blusters, Mlle. Bujold manages a smouldering inner warmth that steals both the audience and the picture away from him.
Without her the film would have been a monumental bore.

Afterword: Anne Boleyn's tale has been told over and over again. She has been the main character in over 30 novels, 13 of them published within the last two years. Geneviève Bujold's story, I'm sorry to say, has yet to attract the attention of a serious biographer. A Montreal bus driver's daughter born on Canada Day (July 1) 1942, she'd become an international star, with a best actress Oscar nomination (for playing Anne) and an appearance on the cover of Time Magazine by the time she was 27. Her subsequent career, as well as her personal and political independence, deserve serious examination. Science fiction fans have speculated about Nicole Janeway, the Star Trek Voyager captain that never was (Bujold quit the 1994 TV show on the second day of shooting). Others have wondered how a such a gifted artist could just shrug off Hollywood stardom in the early 1980s. The mystery that is Bujold remains to be solved.