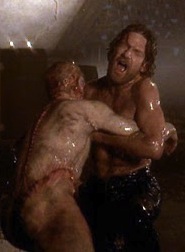 Realizing that it's alive, Victor Frankenstein (Kenneth Branagh, right) begins to have second thoughts about his Creature (Robert DeNiro), in Mary Shelley's Frankenstein.


Reanimated with style and overstatement


To ask "who is the father of science fiction?" is to open a debate. A number of writers have their partisans. Ask who is the genre's mother, and there is but one answer: Mary Shelley. Born on this day (August 30) in 1797, the author of the 1818 novel Frankenstein; or, The Modern Prometheus gave the world its first mad scientist tale, a gift that has never ceased giving. The child of writers — her mother was 18th-century feminist/philosopher Mary Wollstonecraft, her father the political radical William Godwin — Mary famously conceived her story of a reanimated corpse during a summer spent on Lake Geneva in the company of her lover, Percy Bysshe Shelley, her half-sister Claire Clairmont and Claire's lover, Lord Byron, who proposed they each write "a ghost story." Mary was 18 at the time. Director James Whale imagined their 1816 tale-telling session in his 1935 feature The Bride of Frankenstein (with Elsa Lanchester playing Mary). He used the scene to introduce the film's main story. That biographical moment later inspired three full features — Ken Russell's Gothic (1986), with Natasha Richardson playing Mary; Ivan Passer's Haunted Summer (1988), with Alice Krige; and Gonzalo Suarez's Rowing with the Wind (1988), with Lizzy McInnerny. Heard (but not seen) is Emma Thompson, as the voice of the author introducing director Ken Branagh's 1994 feature Mary Shelley's Frankenstein.

Wednesday, November 16, 1994.
MARY SHELLEY'S FRANKENSTEIN. Written by Steph Lady and Frank Darabont. Based on Mary Wollstonecraft Godwin Shelley's novel (1818). Music by Patrick Doyle. Directed by Kenneth Branagh. Running time: 122 minutes. Restricted entertainment with the B.C. Classifier's warning "some violence and gory scenes." POP QUIZ: NAME something written by the 19th-century English author Shelley.
If you're over 30, you're likely to recall a poem by Lord Byron's good buddy Percy Bysshe Shelley. Queen Mab, To a Skylark or, perhaps, the lyric drama Prometheus Unbound.
If you're under 30, like as not you said Mary Shelley's Frankenstein. As we lurch toward the millennium, Mrs. Shelley's nightmare novel has become a more immediate cultural artifact than her husband's passionately allegorical verse.
Pop art: That's what director Kenneth (Henry V) Branagh makes of her Gothic tale. Unsubtle and overwrought to the point of parody, he nonetheless delivers on the promise implied in the title Mary Shelley's Frankenstein.
Unlike any previous version (including Jack Smight's eccentric 1973 telefilm Frankenstein: The True Story), Branagh's feature embraces Mary's original 1816 fever dream with whole-hearted enthusiasm. Produced by Francis Ford (Bram Stoker's Dracula) Coppola, it's driven by a kind of neo-Romantic need to succeed with excess.
Everybody knows the basic story. Working with the technology of his time — the late 18th century — Swiss medical student Victor Frankenstein (Branagh) uses spare human body parts to stitch together a Creature (Robert DeNiro). He revivifies it, reviles it, and is driven round the bend when it proceeds to hate him back.
With few exceptions, movie adaptations portray the Creature as a monster with a murderer's brain wreaking vengeance upon mankind. Departing from filmic tradition, Branagh's version shows us the Creature as Shelley conceived him — an angry, ugly child rejected by his father.
"Did you ever consider the consequences of your actions?" the Creature asks Frankenstein on the eve of Victor's marriage to his adopted sister Elizabeth (Helena Bonham Carter).
"You gave me life," says the Creature, "and then you left me to die. Who am I?"
"I don't know," says a confused and grief-stricken Frankenstein.
"And you think I am evil?" Clearly, actor Branagh is not afraid to give actor DeNiro's Creature all the best lines.
Nor is he afraid to ignore the prevailing trends in cinematic horror to keep faith with Shelley's own intellectual, wild-child spirit. It's worth remembering that the 1818 novel Frankenstein; or, The Modern Prometheus was written by a brilliant teenaged girl whose mother (radical feminist Mary Wollstonecraft) died within days of giving birth to her.
In rebellion against her cold, cerebral father — political theorist William Godwin— Mary, 18, was shacked up on Switzerland's Lake Geneva with the poet Shelley, a man with a wife and child back in England. They were into sex, drugs and scary story-telling (themes explored in Ken Russell's 1986 biographical fantasy Gothic).
Love and rage. They consume Frankenstein's Creature. "If I cannot satisfy the one," he tells Victor, "then I will satisfy the other!"
A first-rate cast that includes Robert Hardy, Aidan Quinn, Tom Hulce, Ian Holm and a decidedly off-type John Cleese insure that the performances are as impressive as Tim Harvey's wonderfully overblown production design.
Even Mrs. Branagh (Emma Thompson) is heard from, performing unbilled in the film's opening narration as the voice of Mary Shelley.
Together, they reanimate Ms Wollstonecraft-Godwin's story for a stormy night with appropriate style and overstatement.

Afterword: Adapted to the screen in 1910 (as Frankenstein by Edison Studios' director J. Searle Dawley), Mary Shelley's novel has the distinction of inspiring the first American science-fiction film. The most famous version — director James Whale's Frankenstein — arrived in 1931 and, together with Tod Browning's Dracula, laid the foundations for the modern horror movie genre. Whale's picture also made a star of Boris Karloff, the man who played The Monster. Karloff reprised the role four years later in The Bride of Frankenstein, and again in Son of Frankenstein (1939). The Hammer Films horror revival of the 1950s gave Christopher Lee his moment in the Monster's make-up (The Curse of Frankenstein; 1957), though he would be best known for his performances as the vampire count (starting with 1959's Horror of Dracula). Lee's Curse of Frankenstein co-star, Peter Cushing, went on to play the title role in another five Hammer Frankenstein features. At this point, entire books have been written about the hundreds of movies inspired by Shelley's "Modern Prometheus." Filmmakers as different as Andy Warhol (Flesh for Frankenstein; 1973), Mel Brooks (Young Frankenstein; 1974), Franc Roddam (The Bride; 1985) and Roger Corman (Frankenstein Unbound; 1990) have taken their shot at the tale. Of all the pop culture spinoffs I've encountered, though, the most memorable was the road house I spotted in the late 1960s. It was on a stretch of highway not far from Gary, Indiana, and its parking lot was dominated by a two-storey tall Creature. Obviously the place to enjoy a hot dog and beer, it was called Frank 'n' Stein.