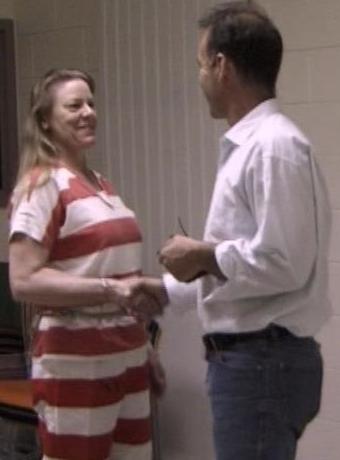 Entering into the story


A truth more appalling than fiction


On this day (November 30) in 1989, Florida storekeeper Richard Mallory became the first victim of that relative rarity, a female serial killer. Convicted of his murder in 1992, her story was the subject of British documentarist Nick Broomfield’s 1993 feature Aileen Wuornos: The Selling of a Serial Killer

AILEEN WUORNOS — THE SELLING OF A SERIAL KILLER. A documentary examining the 1991 arrest and conviction of a confessed murderer. Music by David Bergeaud. Produced and directed by Nick Broomfield. Running time: 86 minutes. Rated 14 Years with the B.C. Classifier’s warning: some suggestive and very coarse language. KILLER INSTINCTS.
They’re found along frontage roads and the campaign trail, and they’re examined in two new non-fiction features: Aileen Wuornos — The Selling of a Serial Killer and The War Room.
*    *    *
Cheque-book in hand, London-born documentarist Nick Broomfield visited Florida in 1992 to film Aileen Wuornos — The Selling of a Serial Killer. An example of truth more appalling than fiction, her tale reads like a noir novelist’s nightmare.
A prostitute who worked Florida’s Interstate 75, “Lee” Wuornos was betrayed to police by Tyria Moore, her lesbian lover. She confessed to the self-defence killing of one abusive john, electronics store owner Richard Mallory, and was later convicted of murdering five additional men.
Basing his investigation on newspaper clippings and television news footage, Broomfield indulges his own fascination with underclass grotesques. Included among his interview subjects are the killer’s adoptive mother Arlen Pralle, the defence attorney Steven “Dr. Legal” Glazer, and Dick Mills, who claims to have survived a sexual encounter with Wuornos.
Broomfield notes that her story has already been the subject of a book, and chats with true crime writer Michael Reynolds, author of 1993’s Dead Ends: The Pusuit, Conviction and Execution of Female Serial Killer Aileen Wuornos, the Damsel of Death. For Broomfield, twisted sister Wuornos is merely the centrepiece of an exhibition of greed and corruption, idiot entrepreneurs, religious hypocrisy and terminal losers.
Caught up in a world where everyone seems eager to sell his sordid, sorrowful story to the movies, Broomfield becomes a part of it and shows himself to be a bit of a twit. The result is a film that is more an exploitation of American excess than an exposé of it.

Afterword: From the beginning, documentary director Nick Broomfield has courted controversy. His debut feature, a critical examination of a British police department’s work with young offenders called Juvenile Liaison (1976), was screened twice, then banned for the next 15 years. He made his name with pictures such as Soldier Girls (1981) and Chicken Ranch (1983), movies that focused on such tabloid issues as women in the military and Nevada’s legal brothels. By the time he set out to document the Wuornos case, he was using what critics call the “self-reflexive” film style — one in which the filmmaker appears in his own picture, which then becomes a movie about the making of the movie. The French call its practitioners Les Nouvelles Egotistes, and include activist director Michael (Fahrenheit 9/11) Moore among the movement’s leaders.
Jailed in 1991, Wuornos was on death row when Broomfield made The Selling of a Serial Killer.  She was still awaiting execution — her appeal to the U.S. Supreme Court was denied in 1996 — when the filmmaker returned to interview her for his follow-up feature Aileen: Life and Death of a Serial Killer. Wuornos received her lethal injection in October 2002 and, 13 months later, Broomfield’s documentary was released to theatres. During her incarceration, her story was the basis for Overkill: The Aileen Wuornos Story, a 1992 made-for-TV movie that starred Jean Smart and was broadcast on the CBS network. In 2003, a month after the second Bloomfield documentary’s release, Christmas filmgoers were treated to Monster, director Patty Jenkins's version of the story. Blonde beauty Charlize Theron gained 14 kilos (31 lbs.) and underwent hours in the make-up chair to play the role of the unattractive Wuournos. Her performance earned her a Best Actress Academy Award.