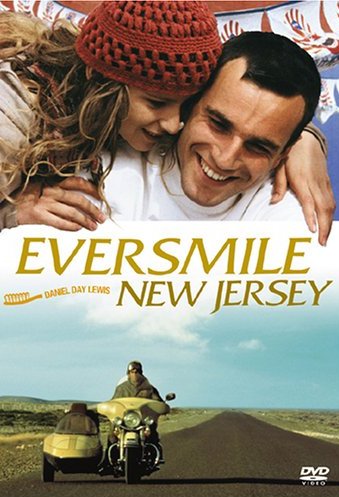 
Preaching the gospel of happy teeth

EVERSMILE, NEW JERSEY. Co-written by Jorge Goldenberg and Roberto Scheuer. Music by Steve Levine. Co-written and directed by Carlos Sorin. Running time: 91 minutes. Rated Mature with the B.C. Classifier's warning: "occasional coarse and suggestive language."
THE PENNY WHISTLE CONCERTS are the clue.
Without them, the comic intentions of Argentine director Carlos Sorin's Eversmile, New Jersey would be even more obscure.
The first one is heard following an energetic lecture on oral hygiene. To calm a rambunctious elementary school class, dental missionary Fergus O'Connell (Daniel Day-Lewis) offers a musical interlude.
O'Connell, sent forth by the New Jersey-based DuBois Foundation for the Development of Dental Consciousness, preaches the gospel of "happy teeth." Equipped with flags, posters, sample toothbrushes and a motorcycle that converts into a functioning field surgery, he's making his way across Argentina's sparsely populated Patagonian plateau.
His second flute concert introduces O'Connell to the listeners of a local radio talk show. The high point of his public ministry, it results in a fateful dinner debate with reactionary establishment practitioner Dr. Ulises Calvo (Julio De Grazia).
It's midway into the movie now, and we know that O'Connell is a dedicated, driven, often self-destructively impulsive man with a mission.
What the flute music interludes alert us to is the fact that his story is a galumphing parody of The Mission, Roland Joffé's 1986 epic of colonial culture clash.
Like Joffé's 19th century Jesuits, O'Connell is an arrogant intellectual ascetic who wrestles with temptation and suffers great guilt. He is committed to the practice of liberation dentistry in opposition to a system more interested in profits than public service.
"Ignorance is not the enemy," he tells himself in a moment of heated self-examination. "Tooth decay is the enemy."
Temptation is everywhere. When runaway teenager Estela Gentile (Yugoslavian actress Mirjana Jokovic) invites him into her pup tent, he refuses, with the explanation that "I'm a dentist."
Huh?
"You don't understand," he tells a prostitute (Viviana Tellas) offering him a Christmas Eve freebie. "I'm a dentist!"
Celeste (Gabriela Acher), a wealthy sheep rancher's widow, understands only too well. "I never imagined that one day I would meet a real travelling dentist," says the wet-lipped seductress. "I promise to be very gentle with you."
An Argentine-British co-production, Eversmile New Jersey is Sorin's attempt to build upon the relative success of his debut feature, 1986's A King and His Movie. The story of an obsessive filmmaker going broke and bonkers during location shooting on the pampas, it did well on the European festival circuit.
His new picture, released in Spanish in 1989, has done less well. Understanding that O'Connell is a would-be saint suffering betrayal in a less-than-perfect world makes his story less murky, but no funnier.
Despite the compelling presence of Oscar-winner Day-Lewis, Sorin's tale of a half-mad paddy in Patagonia remains distant, disjointed and emotionally foreign.
Not unlike Dusan Makavejev's lumpen The Coca- Cola Kid (1985), Eversmile, New Jersey is a conceptual misfire.

Afterword: If the Internet is to be believed — and that’s a big If — the Tooth Fairy is popular enough to have two “national days”: February 28 and August 22. The first can be credited to author Katie Davis, who probably came up with the idea to promote her children’s picture book, Mabel the Tooth Fairy and How She Got Her Job. The origin of the second, apparently older celebration, is more elusive. Though enthusiastically endorsed by dentists and toothpaste manufacturers, I can find nothing on the who, when or why of its establishment. In the absence of any hard facts, then, let’s credit it to DuBois Foundation for the Development of Dental Consciousness, the oral hygiene obsessives based in Eversmile, New Jersey.
Unlike the Tooth Fairy, dentists have not been treated well in the movies. From Christian Szell (Laurence Olivier), the Nazi torturer in director John Schlesinger’s 1976 thriller Marathon Man, to Orin Scrivello (Steve Martin), the laughing-gas addicted sadist in Frank Oz’s Little Shop of Horrors (1986), there’s seldom been a positive portrayal of a dental practitioner. When not downright scary, they are played for laughs: Sheldon Kornpett (Alan Arkin) in Arthur Hiller’s 1979 comedy thriller The In-Laws. And we mustn’t forget Willie Wonka’s dentist dad Wilbur (Christopher Lee), so important to our understanding Tim Burton's Charlie and the Chocolate Factory (2005).
American popular culture’s most famous dentist is, of course, western lawman Wyatt Earp’s friend and ally John Henry “Doc” Holliday. Their story has been a movie staple since the 1930s. Dozens of actors have played the role over the years, most notably Cesar Romero (in 1939’s Frontier Marshal), Walter Huston (The Outlaw; 1943), Victor Mature (My Darling Clementine; 1946); Kirk Douglas (Gunfight at the O.K. Corral; 1957); Jason Robards (Hour of the Gun; 1967), Stacy Keach (Doc; 1971), Val Kilmer (Tombstone; 1994) and Dennis Quaid (Wyatt Earp; 1994). I also like to think that the upright Holliday was the inspiration for “Painless” Potter, comedian Bob Hope’s hapless dentist in 1948’s western comedy The Paleface.