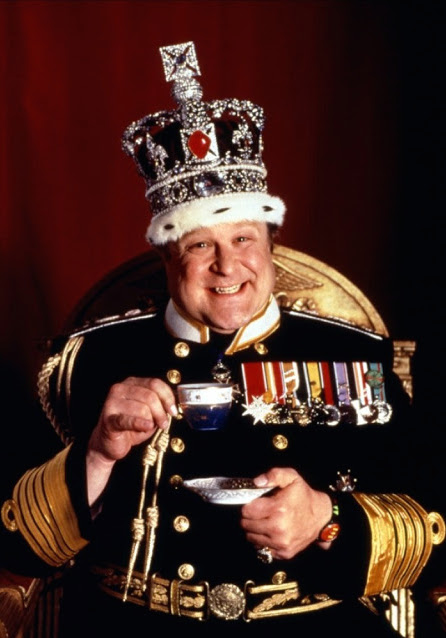 Expect to be amused


Finding fun in the rites of succession


On this day (June 24) in 1509, Henry Tudor was crowned King Henry VIII. In time, he would become corpulent. Already portly on the day he ascends England’s throne is Ralph Jones, an accidental successor played by John Goodman in director David Ward’s 1991 alternate history King Ralph.

KING RALPH. Based on the 1980 novel Headlong, by Emlyn Williams. Music by James Newton Howard. Written and directed by David Ward. Running time: 95 minutes. Mature entertainment with the B.C. Classifier’s warning: "occasional coarse and suggestive language.” WE DID NOT EXPECT to be amused.
The photoplay proceeds from a most unpromising premise.
Their Majesties die.
Indeed, the entire "House of Windom," 49 royal personages, fall victim to a tragic accident, one that calls into question the technical competence of Britain's photographic artisans.
The American filmmaker David S. Ward purports to find humour in these unfortunate circumstances. He further proposes that the surviving heir to the crown is a corpulent entertainer from Nevada, one Ralph Hampton Jones.
Mr. Jones, who ascends the throne as King Ralph, is portrayed by John Goodman, a player not known for his dignity in performances. His reputation is founded on common roles, men of trade rather than refinement.
As Mr. Jones, he is found playing the piano in a Las Vegas gaming establishment, employment which requires him to share dressing room facilities with Mitzi the Psychic Chimp.
We feared that Mr. Ward would continue in this tiresome vein, compounding bad taste with insistent vulgarity.
We are pleasantly surprised.
In the past, Mr. Ward has proven more skilled as an author of screenplays than as a film director. We recall The Sting from 1973, and The Milagro Beanfield War of 1988 more fondly than 1982’s Cannery Row.
He is improved.
Though Mr. Jones is shown to be temperamentally unsuited to his new nobility, his story is not at all antagonistic to the responsibilities of sovereignty.
We were pleased to hear the fine Irish actor Peter O'Toole remind his American co-star that kingship "is a God's burden to bear. Unfortunately, it must be borne by a man."
Well known for his portrayals of kings and royal tutors, Mr. O'Toole appears as the unlikely monarch's personal secretary, Sir Cedric Charles Willingham.
Sir Cedric is charged with the task of educating the exuberant Mr. Jones, and channelling his natural excesses in ways that will benefit the realm.
Mr. Goodman displays admirable ability to grow within a role. This is entirely consistent with Mr. Ward's intentions, which are to respectfully assert the traditional British values of tolerance, responsibility, character and honour within a comedic framework of mildly outrageous cultural conflict.
We approve.

Afterword: Talk about a “special relationship.” Though the United States declared themselves “Absolved from all Allegiance to the British Crown” in 1776 (and fought a revolutionary war to assert their independence), the resulting republic came to the aid of the King in both of the 20th century’s World Wars. The phrase “special relationship” came into general use after Britain’s wartime prime minister Winston Churchill included it in a 1946 speech he gave in Fulton, Missouri, in the presence of American president Harry Truman. It became particularly cuddly when U.S. television’s PBS network went full monarchist in 1971, broadcasting the six-part BBC mini-series The Six Wives of Henry VIII. Despite the lip service much of American popular culture plays to egalitarian values, there remains an audience for tales of dynasty, royal prerogative and the divine rights claimed by those born to wealth and privilege. Perhaps it was inevitable as the republic became more aware of itself as an imperial power and heir to Britain's empire.
Since Truman (originally a Kansas City haberdasher), the presidency has gained in power and importance. The man (and it’s always been a man) in the Oval Office may be a bozo — Reagan, Clinton, Bush Jr. and Trump are only the most egregious recent examples — but he shares with history’s absolute monarchs the capacity to make war on a whim. To date, Americans have cut their chief executive a lot of slack, and there remains significant support for the current incumbent. Even among those who oppose Donald J. Trump, there are those who grant (in the words of Jessica Rabbit when asked “what do you see in that guy?”): “He makes me laugh.” This may be changing. Among the many unanticipated results of the global coronavirus pandemic has been time for some serious self-reflection. People around the world have been considering the past, present and, most seriously, the shape of our shared future. Change seems inevitable, though where it may take us is less clear.
In David Ward’s King Ralph, England receives a literal shock to its monarchical system. Rather than embrace change, it sets out to restore things to “normal,” even if that means placing a genial bozo on the throne. At the time, it never occurred to me that the screenwriter of the wonderfully subversive The Milagro Beanfield War might be making a subtle comment on the future of American politics. I don’t know whether or not he wanted us to think. What he did, though, was make us laugh.