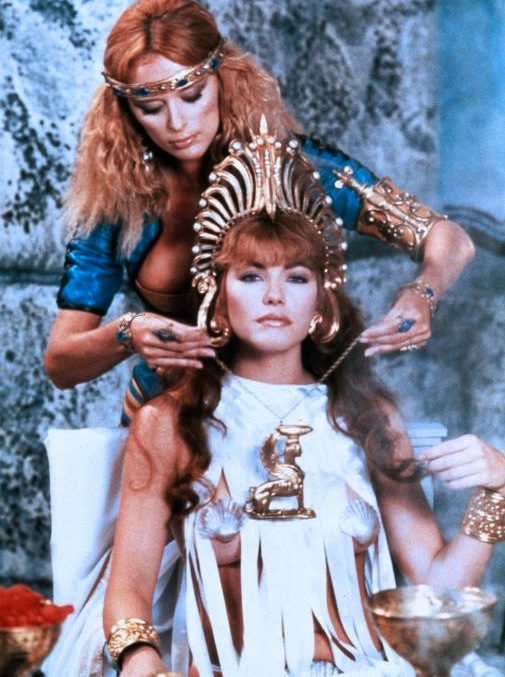 
Reeling Back's word of the day (July 27): Peplum. Fashionistas will recognize it as Greek for "tunic," a loose-fitting, short-skirted garment worn in the ancient world. The release Friday (July 25) of yet another feature film called Hercules is a reminder that peplum is also the name given to the somewhat silly film genre featuring massively-muscled men battling gods, monsters and tyrants in the Graeco-Roman past. This usage seems to have been coined by the French critic Bertrand Tavernier in a 1963 issue of Cahiers du Cinema, in recognition of the international success of another Hercules, the Steve Reeves version released in the U.S. in 1959. While European critics grudgingly accepted the big-budget Biblical epics of the 1950s, they just had to heckle the flood of sword-and-sandal flicks that domestic Italian producers were grinding out on the sets that such Hollywood movies as Ben-Hur (1959) left behind in Rome. Between 1957 and 1965, the character Hercules was featured in 19 movies, Maciste in 25, and Ursus in nine, with Sampson and Goliath in five each. Yes, pepla have their fans and cult followers, who lovingly compile such statistics for our amazement. And peplum remained a part of the fringe film mix even after the Italian industry turned its attention to the manufacture of spaghetti westerns. One example from 1983 is Hercules, with Lou Ferrigno in the title role.

Friday, September 16, 1983.
HERCULES. Music by Pino Donagio. Written and directed by Lewis Coates (Luigi Cozzi). Running time: 98 minutes. Mature entertainment with the B.C. Classifier's warning: some violence. CLASSICAL SCHOLARS BEWARE. Writer-director Lewis Coates's new Hercules owes less to the Graeco-Roman literary tradition than to Saturday morning TV cartoons.
Made on the cheap on Italian studio sets, its mangled mythology seems to have been manufactured on the spot by a screenwriter caught between a hangover and a deadline. He gets things started with an "in the beginning . . ."  light show, a bit of pre-Christian creationism that introduces "the gods (who) claimed the moon as their home."
Standing about like dolls on a wedding cake are Zeus (Claudio Cassinelli), his wife Hera (Rossana Podesta) and Athena (Delia Boccardo). Life on the lunar surface being singularly boring, the deities set about messing in the affairs of men.
To aid the forces of good against evil, Zeus decides to endow the infant Hercules with preternatural strength, intelligence and virtue. Though Athena approves, Hera is jealous and . . . but why go on?
Movies like this are not really about what they appear to be about. Such things as plot, motivation, character and acting are all incidental to the business of setting a selection of eye-catching images in motion.
A live-action superhero comic, Hercules cleverly provides lots of cheapjack special effects for the subteens and some heroically proportioned, imaginatively costumed damsels for their dads.
Eschewing all of the familiar Hellenic draperies, costume designer Adriana Spadaro lets her imagination take flight. Villainess Arianna (Sybil Danning) appears in a body-hugging, iridescent blue maillot, cut and cantilevered to emphasize the fact that she is a healthy mammal.
Circe the Sorceress (Mirella D'Angelo) wears something that looks like a gold papier-mâché corset and go-go boots. Heroine Cassiopea (lngrid Anderson) is sent to be sacrificed in a nifty number that consists of two sea shells, a satin g-string and a collar of flowing, floor-length ribbons.
In the title role is Lou Ferrigno, TV's Incredible Hulk. He runs around in the traditional leather diaper, displaying musculature that is perhaps the film's most impressive special effect.
Ferrigno, an iron pumper, has built up his body to the point where he makes Steve Reeves, the screen's best known Hercules, look like the "before" picture. Can he act?
Don't ask.

Afterword: Hercules (aka Heracles), Greek mythology's legendary strongman, was the kid who had every advantage. His dad was Zeus, the father of the Olympian gods, while his mom was the exceptional mortal Alcmene. The tradition of casting American body-builders in his cinematic adventures goes back to Steve Reeves, who progressed from playing a cop for Ed Wood (in 1954's Jail Bait) to battling armies for 1959 Hercules director Pietro Francisci. Samson Burke, who played the role in 1962's The Three Stooges Meet Hercules, was a Canadian-born Olympic wrestler. Two-time Mr. Universe Lou Ferrigno made his feature film debut as the 1983 Hercules, earning a Golden Raspberry Award as "worst new star" in the process. Kevin Sorbo became television's Hercules in 1995, playing the role for six series seasons, and in five made-for-TV movies. In January of this year, former Calvin Klein underwear model Kellan Lutz took some serious critical brickbats for his performance in director Renny Harlin's The Legend of Hercules. Current Hercules star Dwayne Johnson developed his muscles playing football for the Calgary Stampeders, and as professional wrestling's The Rock. And, no, I've not forgotten that Austrian-American iron-pumper Arnold Schwarzenegger made his motion-picture debut (as Arnold Strong) playing opposite comedian Arnold Stang in the 1970 god-out-of-heaven feature Hercules in New York.

See also: Among the websites devoted to the appreciation of peplum is one that features a page devoted to Canadian Peplum Stars.