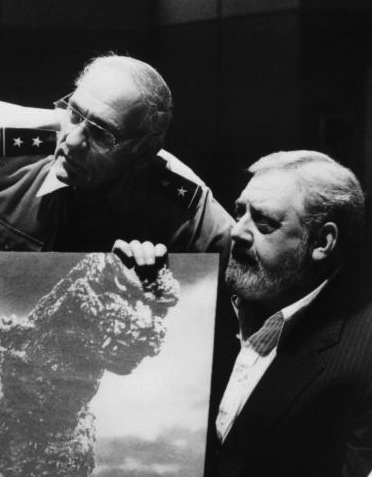 In the Pentagon, General Goodhoe (Warren J. Kemmerling) and veteran newsman Steve Martin (Raymond Burr), bring themselves up to speed for Godzilla 1985 by reviewing newsreel footage of the Japanese reptile's 1956 rampage.


Tokyo survives yet another stomping


It's hard to believe that "The Big G" turns 60 in November. Gojira, or, as he's known to American audiences, Godzilla, King of the Monsters, first rose from Tokyo Bay in 1954. An amphibious reptile, he looks like an irradiated dinosaur (although the strict translation of his Japanese name is "gorilla-whale"). Metaphorically, he embodies the horror of nuclear war so keenly felt in Japan, the only country to have suffered an atomic bombardment. A runaway hit in his homeland, Gojira became a film franchise, with the creature starring in 28 Toho-produced features between 1954 and 2004. None of this is news to uber-fan Stan Hyde, the Vancouver drama teacher who doubles as the mastermind behind Monster Attack Team Canada, and is a contributor of erudite articles to such specialty journals as G(Godzilla)-Fan. Hyde was delighted to work as an extra during the Vancouver location shooting for Godzilla, the Warner Bros. remake that opens tomorrow (April 16), and already has seen himself on screen in the film's current advertising trailers. Intended as a "reboot" of the franchise for American audiences, the new film has The Big G standing in for "the wrath of nature" according to director Gareth Edwards. He certainly can do no worse than R.J. Kizer, the American director credited with the first attempt at a remake, Godzilla 1985.

Sunday, October 27, 1985
GODZILLA 1985. North American release version of the Japanese-language feature Gojira (1984), written by Shuichi Nagahara, from an original story by Tomoyuki Tanaka. Music by Reijiro Koroku. Directed by Kohji Hashimoto. Added English-language sequences written by Lisa Tomei and directed by R.J. Kizer. Running time: 89 minutes. Mature entertainment with the B.C. Classifier's warning: some violence. IN THE DEPTHS OF THE Pacific off Japan, a Soviet nuclear submarine encounters something huge. Two torpedoes fail to stop the unidentified hostile and the sub is lost with all hands.
Suspecting U.S. aggression, the Soviets and their satellites go on full military alert. The Americans, equally suspicious, respond with a tension-building alert of their own.
In Tokyo, Japanese Premier Mitamura (Keiju Kobayashi) is deeply embarrassed. He calls in the superpowers' ambassadors and, with the look of a man confessing to a history of insanity in the family, utters the name of the true miscreant: Godzilla!
Ah, yes, Godzilla. Perhaps the most popular movie monster of the 1950s, the Big G first emerged from the Toho Studios special-effects tank in 1954. Called Gojira in his domestic Japanese incarnation, he was originally identified as a fast-frozen leftover from the Mesozoic Era, awakened from a 100-million-years-long sleep by modern H-bomb testing.
Intended as a serious protest against nuclear weaponry, the atmospheric fantasy starred respected dramatic actor Takashi Shimura. As Dr. Yogami, he was a thoughtful palaeontologist who becomes the foul-tempered reptile's leading apologist. New footage featuring an American wire service reporter named Steve Martin (Raymond Burr) was inserted into the English-dubbed version, released in North America as Godzilla, King of the Monsters (1956).
In 1977, after 15 feature film appearances, during which he metamorphosed from a fire-breathing villain into a giddy good guy, Godzilla's creators announced a multi-million-dollar remake of the famous first feature. Now, after numerous setbacks and delays, filmgoers are being offered Godzilla 1985.
In an American suburban home, a child looks up from his toys to see a uniformed army officer, who has come seeking his grandfather. "Mr. Martin," says the soldier, "we need you in Washington.''
"Yes," says the bearded, portly old reporter (Burr, reprising his role from 29 years earlier). "I've been expecting you." Like Premier Mitamura, Martin wears a look that suggests that things are not going well.
Nor are they. Nostalgic for the faraway 1950s, screenwriters Shuichi Nagahara (and, later, Lisa Tomei for the U.S. scenes) have penned a story every bit as primitive as that era's visual effects. Toho's technicians, perhaps sentimental for the pre-2001 fantasy look, use the same old approach — a man in a rubber reptile suit is seen stomping the bejeezus out of a lot of obvious model ships and planes, toy trains and miniature buildings.
A product of a specific time and place, director Inoshiro Honda's first Gojira had both enough originality and raw energy to earn itself a place among the great movie monsters.
Godzilla 1985, like Dino DiLaurentiis's disastrous 1976 King Kong remake, goes through the motions without making any lasting impression of its own.

Afterword: Released with the subtitle The Legend Reborn, Toho's $2,000,000 Godzilla 1985 was a disappointment that fans of The Big G just wanted to forget. Truly reviled, by contrast, was the 1998 attempt by Hollywood's Tri-Star Pictures to create its own Godzilla franchise. Working with a reported budget of $130,000,000, Independence Day director Roland Emmerich is unfairly remembered as the man who made the worst Godzilla movie ever. In his version, Big G is more of an iguana than a dinosaur, and is called forth by French nuclear bomb tests in the South Pacific. Personally, I enjoyed the German-born Emmerich's European twitting of American exceptionalism, as he tells the story of French secret agents (led by an unflappable Jean Reno) working hard to clean up a mess of their own government's creation. Matthew Broderick's performance notwithstanding, the 1998 Godzilla is less awful than its critics claim.