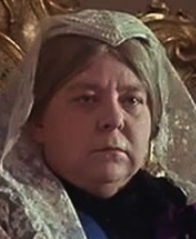 For Queen and comedy


Unique among nations, Canada today (May 19) celebrates the birth of Princess Alexandrina Victoria, the child who became "Her Majesty Victoria, by the Grace of God, of the United Kingdom of Great Britain and Ireland Queen, Defender of the Faith, Empress of India." An official holiday here since 1845, Victoria Day (or, as it is currently known in Quebec, Journee nationale des patriotes) now falls on the last Monday before May 24 (her actual birthday), creating the summer's first long weekend. Although the reasons for Canada's devotion to Britain's longest reigning monarch are long forgotten, we continue to appreciate the extra day off. Forgotten as well is 1937's Victoria the Great, the biopic made to celebrate the centenary of her coronation, and its sequel, Sixty Glorious Years (1938). Since then, like the 43rd U.S. president, Victoria has been largely misunderestimated in the pop culture record, although that could change. In such recent films as 1997's Mrs. Brown (in which Judy Dench played the widowed monarch), and 2009's The Young Victoria (with Emily Blunt as the newlywed queen), she is portrayed as an intelligent, independent woman. It's certainly an improvement on the "not amused" supporting role she's assigned in the 1975 comedy The Adventure of Sherlock Holmes' Smarter Brother.

Wednesday, December 31, 1975
THE ADVENTURE OF SHERLOCK HOLMES' SMARTER BROTHER. Music by John Morris. Written and directed by Gene Wilder. Running time: 91 minutes. General entertainment with the B.C. Classifier's warning: parents — occasional coarse language. IT TAKES A GOOD DEAL of talent to create comedy that is of a piece, rather than a lot of pieces. Writer-director Gene Wilder doesn't have it yet.
Wilder is an alumnus of the Mel Brooks mob. He starred opposite Zero Mostel in the former TV gagman's breakthrough feature, 1968's The Producers. Brooks used him again in Blazing Saddles and Young Frankenstein (both 1974).
On the last named feature, Wilder was co-credited with the screenplay. Now he has struck out on his own, producing a comedy pastiche involving fiction's greatest consulting detective, The Adventure of Sherlock Holmes' Smarter Brother.
His story opens with Queen Victoria (Susan Field) entrusting the fate of Britain's Empire to her inept Foreign Secretary, Lord Redcliff (John Le Mesurier), who becomes tongue-tied and trips over the usual courtesies.  Her Majesty is not amused.
Nor, I suspect, would Holmes' creator, Sir Arthur Conan Doyle, have been much amused. His mysteries were all carefully constructed and logically structured. Every piece was part of the whole.
Not so with Wilder. He knows how to assemble funny bits. He surrounds himself with funny people — notably Madeline Kahn and Marty Feldman, his Young Frankenstein co-stars, Leo McKern and Roy Kinnear (borrowed from the Richard Lester stock company), and Dom DeLuise (from American television).
What he hasn't been able to do is maintain any comic consistency. His film is a series of virtually independent sketches that tend to spotlight one or another of the stars, or a particular gag situation.
There is no plot to speak of. Wilder has cast himself as Sigerson, Sherlock's younger brother, who enjoys a hate-dislike relationship with the great detective. Nonetheless, when the elder brother (Douglas Wilmer) passes a case on, Sigerson takes it.
Unlike Young Frankenstein, which parodied specific films and a specific film style, Adventure is an elaborately mounted variety show. A more diffuse movie — its characters sing, dance, go to the music halls and even mount an opera — it is considerably less effective.
There are good bits. Dom DeLuise is outstanding in his turn as Cambetti, an opera star with a passion for villainy. Composer John Morris's counterfeit Korngold score is completely delightful.
The bits don't come together in a whole, unfortunately. At one point Albert Finney, in an unbilled guest appearance, turns to the camera and asks, "is this rotten or wonderfully brave?"
The answer is yes.

Afterword: Gene Wilder, a knowledgable Holmes buff, packed his picture with various goodies for the Baker Street Irregulars. They'd recognize Douglas Wilmer, the actor playing Sigerson's older brother, as the star of BBC-TV's 1965 Sherlock Holmes series. Thorley Walters, cast in the Watson role, played the good doctor in two previous feature films, Sherlock Holmes and the Deadly Necklace (1962) and The Best House in London (1969). Written following the success of his collaboration with Mel Brooks on the Young Frankenstein screenplay, Smarter Brother became Wilder's directorial debut feature when Brooks passed on the project. A financial success, it was followed by another three manic comedies, all of them written, directed and starring Wilder: The World's Greatest Lover (1977), set in Hollywood during the silent film era; The Woman in Red (1984), an adaptation of the 1976 French film Pardon Mon Affaire; and Haunted Honeymoon (1986), set in 1930s New York, the golden age of radio. None found much by way of audience support, and Wilder gave up on directing.