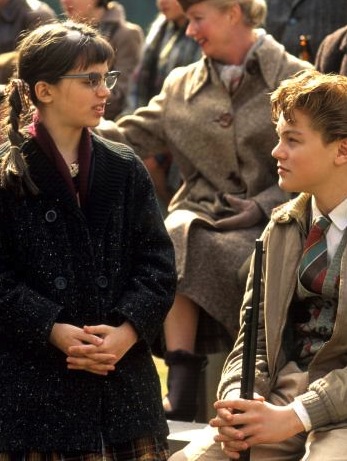 
Making the best of a bad bargain


Eliza Dushku is probably best known for playing the bad-girl slayer Faith on TV's Buffy the Vampire Slayer. Born on this day (December 30) in 1980, Dushku began her career as child star, making her first visit to Vancouver for a supporting role in 1993's This Boy's Life.

Friday, April 23, 1993.
THIS BOY'S LIFE. Written by Robert Getchell. Based on the 1989 memoir by Tobias Wolff. Music by Carter Burwell. Directed by Michael Caton-Jones. Running time: 115 minutes. 14 Years Limited Admission with the B.C. Classifier's warning "some very coarse language, occasional violence and suggestive scenes." KIDS TODAY GOT no respect.
They think it's funny when Dad tells them how tough it was back when. They think he's blowing smoke when he says it was no bed of roses growing up in boom times, watching black-and-white television and rebelling without a cause.
This Boy's Life is not funny. Like one of Dad's self-serving sermonettes, director Michael Caton-Jones's domestic drama is part reality, part bull, all pathetic.
Based on Tobias Wolff's autobiographical novel, it takes us back to 1957. Ever-optimistic single mom Caroline Wolff (Ellen Barkin) is on the road again, heading west with her teenaged son Toby (Leonardo DiCaprio).
Eventually they reach Seattle, where a resentful Toby spends his time smoking, swearing and hanging out with the local JDs. Mom, meanwhile, is being courted by one Dwight Hansen (Robert De Niro), a florid joke left over from the 1940s.
The joke's on Toby. Crew-cut "Dah-white" is serious about Caroline and offers to straighten out her troubled, troublesome son.
She agrees, and bundles the boy off to Hansen's home in rural Concrete, Washington, where there are "good schools, honest people and fine fishing." Alone with Toby, Hansen turns sinister, enunciating his philosophy of tough love.
The kid's new routine features make-work projects that include husking horse chestnuts, an afternoon paper route and membership in the local scout troop (with a subscription to "Boy's Magazine," the film's version of Boy's Life, the official publication of the Boy Scouts of America).
Thinking her son to be happy, Caroline marries Dwight and becomes stepmother to his son Skipper (Zach Ansley) and daughters Pearl (Eliza Dushku) and Norma (Carla Gugino). Only afterward does she realize that Dwight is a cornball collection of narrow-minded, self-important, All-American backwoods male meanness.
"I'm going to make this marriage work," she tells her sullen son. "You have to concentrate on the good stuff."
Here, "the good stuff" is in the performances. Newcomer DiCaprio is okay as a kid who'll grow up to be a sensitive, successful writer, but who must first survive life in a blue-collar backwater.
Barkin, blessed with the sexiest squint in movies today, is thoroughly credible as a luckless woman who can't seem to win for losing. De Niro, an actor as brave as he is proficient,  makes the ambiguous, dead-ended Dwight both despicable and hopelessly tragic.
Less impressive is Robert Getchell's screenplay, a tired adaptation that recalls his own best-known work, 1974's Alice Doesn't Live Here Anymore. Utterly lacklustre is the film's overstated direction.
Though his Doc Hollywood (1991) showed him capable of imitating Frank Capra, the Scots-born Caton-Jones has no aptitude for Nicholas Ray-like romanticism. From his choice of period music to the movie titles seen on the local picture show's marquee, his attempts at irony are unsubtle to the point of insult.
No winner dramatically, This Boy's Life is essential viewing only for those who have to see absolutely everything filmed in and around Vancouver.

Afterword: Boston-born Eliza Dushku made her feature film debut at the age of 11 in a starring role in the 1992 coming-of-age drama That Night. She played a 10-year-old fascinated with the girl across the street, a 17-year-old played by Juliette Lewis. A year later, Dushku was working in B.C.'s North Shore Studios on This Boy's Life. She broke through as an action star in her third feature, 1994's True Lies. Under James Cameron's direction, Dushku played the trouble-prone teenaged daughter of Arnold Schwarzenegger and Jamie Lee Curtis. In 1998, she put off going to college to take the part of Faith on Buffy the Vampire Slayer (1998-2003), then on the spin-off series Angel (2000-2003).
Although the show's producers were considering a Faith-based series, Dushku demurred, deciding instead to return to Vancouver, where she played title character, Tru Davis, a morgue worker with psychic powers, in two seasons of the Fox Network's Tru Calling (2003-2005). Buffy creator Joss Whedon remained a Dushku fan, and created the thematically challenging Dollhouse (2009-2010) to showcase her talent. As Caroline Farrel, aka Echo, she was a programmable "active" who came to resist her corporate masters over the course of two seasons. Recently, Dushku has supplemented her TV and feature film roles with cartoon voice work, adding Catwoman/Selina Kyle (in 2011's Batman: Year One video feature) and She-Hulk (a continuing character on TV's Hulk and the Agents of S.M.A.S.H. from 2013-2014) to her repertoire. Eliza Dushku celebrates her 35th birthday today.