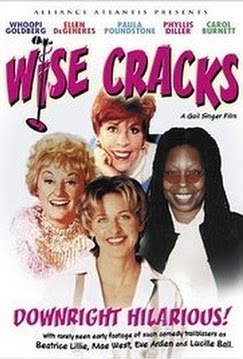 
Standing up to the comic patriarchy


On this day (September 21) in 1962, two-time Oscar winner Bette Davis advertised for work in the Hollywood Reporter, an ad that mocked Hollywood’s treatment of older actresses. Director Gail Singer celebrated such caustic female humour in her 1992 concert documentary Wisecracks.

Tuesday, February 18, 1992.
WISECRACKS. Concert documentary with interviews. Music by Maribeth Solomon. Co-produced and directed by Gail Singer. Running time: 90 minutes. Rated 14 Years Limited Admission with the B.C. Classifier’s warning: some very coarse and suggestive language.
FOR A GOOD TIME, call Gail.
The good time is Gail's movie, Wisecracks. It features about 30 of her friends and, let me tell you, they're a terrific bunch of girls.
Just  kidding.
So, too, are the women in Wisecracks, Ms Gail Singer's feisty, funny feature documentary on the subject of females at work in the world of stand-up comedy.
After all, they're professional kidders.
And, let me tell you, they are good at it. The women who appear in her film are all survivors of the hardscrabble comedy club circuit, a sink-or-swim business that rewards talent but insists that it be accompanied by considerable aggression.
Until recently, comedy was a man's world. Women were seen only as partners (Burns and Allen; Ford and Hines; Nichols and May) or as members of improv companies, such as Second  City.
Eventually, some bright and witty women noticed that it was social convention rather than any natural comic disability that denied them their place in the stand-up spotlight. They began to step forward, convinced that humour was a product of personality, not gender.
And they were right.
To gather the evidence, Singer went on location in London, Edinburgh, Toronto and Los Angeles. Her film makes the case, intercutting appropriate performance footage with interview moments to illustrate the fact that funny is funny.
It should probably be mentioned that Singer's co-producer is the National Film Board's often stridently feminist Studio D, an operation not previously known for intentional humour. To its credit, Wisecracks toes no obvious party line in its serious examination of the funny business.
What it does is allow the comics and their work to speak for themselves. The spin, inevitably, is female rather than feminist; the effect is more often hilarious than hostile.
Occasionally, the jokes are rude (though there's nothing to compare to the witless filth of an Eddie Murphy being raw or an Andrew Dice Clay just being).
Socially aware audiences will embrace Singer's thesis for its positive dialectic as it deconstructs the sexist continuum prevalent in post-industrial society.
Just  kidding.
See it because it's funny.

Afterword: Bette Davis completed work on What Ever Happened to Baby Jane? (the film for which she would receive her eleventh Academy Award nomination) just nine days before the following item appeared as a "Situation Wanted, Women / Artists" classified ad in the Hollywood Reporter trade paper:
Mother of three - 10, 11 & 15 - divorcée. American. Thirty years experience as an actress in motion pictures. Mobile still and more affable than rumour would have it. Wants steady employment in Hollywood. (Has had Broadway.)
Bette Davis, ℅ Martin Baum, G.A.C.
References upon request.
Never afraid to speak her mind, Davis was 54 in 1962. She managed to find steady work (though not always in Hollywood) until her death in 1989 at the age of 81. The gender problems her ad addressed, though, continue to this day. A study released earlier this week (September 18, 2017) reports that “women remain underrepresented in Hollywood,” and an earlier ABC News story suggests that the pay gap between men and women in Hollywood is actually growing.
None of this will come as news to Gail Singer. A Toronto-based movie-maker, university film teacher and culture critic, she made her directorial debut in 1980 with Love, Honoured and Bruised, a documentary short on battered women made for the National Film Board of Canada. In 1991 she graduated to features, directing her own adaptation of Sondra Gotlieb’s comic novel True Confections, and collecting an original screenplay Genie Award in the process. Her feature documentary Wisecracks followed in 1992. Twenty-five years later, it remains fresh and funny, which is to say that the targets of the women’s barbs have not gone away. And that, I have to say, is not at all funny.