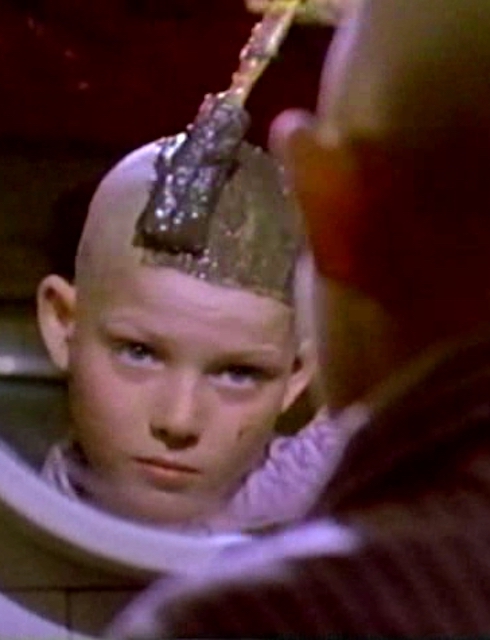 
A talent for unconventional invention


Those lucky enough to have survived 2020 are just glad to see the end of it. Moving on, let’s remember a bewitching bit of Canadiana from writer-director Michael Rubbo. Born on this day (December 31) in 1938, he came up with the 1985 spellbinder, The Peanut Butter Solution.

THE PEANUT BUTTER SOLUTION. Music by Lewis Furey. Written and directed by Michael Rubbo. Running time: 93 minutes. Rated General entertainment with the B. C. Classifier’s warning: “may be frightening to very young children.” THE PROBLEM IS HAIR. Michael Baskin (Mathew Mackay) hasn't had any since the morning after the afternoon of his fright.
Challenged by his best friend Conrad “Connie” Wong (Siluck Saysanasy), the agile 11-year-old climbed a rubble chute and ventured into the badly burned shell of an old, dark house. Within the charred walls, something scared him so badly that his hair lost its grip on his head.
The remedy is The Peanut Butter Solution. The formula —“one really ripe banana, five dead flies, one rotten egg . . .” — is given to him in the dead of night by a pair of crusty old ghosts (Helen Hughes and Griffith Brewer), who promise that one application will restore his lost locks.
Unfortunately, the poor bald boy overdoes the all-important peanut butter. Within hours, he has more mane than he needs or wants.
Last year [1984], Montreal producer Rock Demers released his La Guerre des tuques (known in English as The Dog Who Stopped theWar), the first in a family-oriented film series called Tales for All. Just in time for the holiday rush, he’s back with a new and better picture, writer-director Michael Rubbo’s The Peanut Butter Solution.
Demers's 1984 feature was an outdoors adventure, an energetic tale of rural childen involved in the storming of a snow fort. This time, he is offering an urban fantasy, a non-formula fairy tale that unfolds with considerable verve and originality.
In it we meet Michael, the son of moderately successful Montreal painter Billy Baskin (Michael Hogan). Michael Baskin has an active imagination — too active for the likes of his elementary school art teacher. "The Signor" (Michael Maillot) is an autocratic presence who affects an accent, an academic gown and a passion for photographic realism.
“You dare to imagine in my class!” he thunders at Michael on the very day of the lad's great fright. “I want accuracy!”
Later in the film, when the villainous Signor begins stealing children off the streets to work in his magic paint brush factory, I recalled another kiddie nightmare epic, 1953’s The Five Thousand Fingers of Dr. T. In it, a put-upon piano student (Tommy Rettig) imagines that his teacher (Hans Conried) is a mad musical mesmerist bent on enslaving 500 little prodigies.
Here, director Rubbo offers several clues to the fact that his tale is to be seen as a fantasy. We see a doctor (Harry Hill) diagnose imaginative Michael’s initial condition as a case of “harum scarum.” The delivery of his peanut butter solution is entrusted to the “ghost office,” and Michael's sister Suzie (Alison Podbrey) locates The Signor's secret hideout by means of a Hansel-and-Gretel-like sugar trail.
A veteran National Film Board documentarist making his fictional-film debut, Rubbo demonstrates a talent for unconventional invention. Never dull or predictable, The Peanut Butter Solution is a chunky-style treat.

Afterword: B.C.’s film classifier got it right when he required theatres screening The Peanut Butter Solution to post the warning “may be frightening to very young children.” In the years since its Christmas 1985 release, many a kid has recalled the lasting scary memories caused by Michael Rubbo’s hair-raising tale. In a recent interview with blogger Blake Harris, the film’s producer Rock Demers reported that “at that time in the early 80s (Rubbo) had a son of eight or nine years old . . .  one day he said, “Dad, instead of reading in a book, why don’t you invent a story for me?” According to Demers, his Dad's invention became the boy’s favourite bedtime story, and the inspiration for the movie.
An Australian, Rubbo played a significant role in Canada’s film history. By the time he joined Demers’s effort to create “Tales for All,” he’d put in 20 years as an innovative National Film Board documentarist. With The Peanut Butter Solution, he can take credit for introducing English-language audiences to the talents of Québec chanteuse Céline Dion. The teen singer recorded her first songs in English for the film’s soundtrack. During his decade with Demers, Rubbo wrote and directed three more family features: Tommy Tricker and the Stamp Traveller (1988), Vincent and Me (1990) and The Return of Tommy Tricker (1994). Then, in 1996, he returned to Australia to head up the documentary unit at ABC-TV. A lifelong social activist, his most recent causes have included championing bicycle use, single-screen movie theatres, and the release of political prisoner Julian Assange from detention in the U.K. Rubbo turns 82 today (December 31).