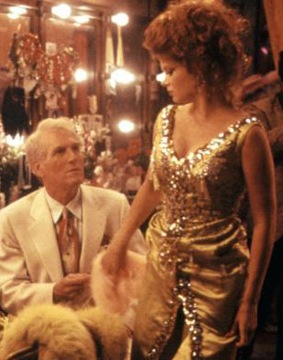 Giving in to a weakness


Notoriously volatile and often scandalous, Hollywood marriages are celebrity relationships seemingly custom tailored for the pages of supermarket tabloids. One can only imagine the degree of anticipation in certain editorial offices at the news of the 1997 nuptials joining actress Lolita Davidovich and writer-director Ron Shelton in holy wedlock. Davidovich, born on this day (July 15) in 1961 in London, Ontario, had played the title role in Blaze, Shelton's 1989 biographical feature about stripper Blaze Starr and her relationship with married Louisiana governor Earl Long. "We met on that movie and fell in love later," Shelton said in a 2012 interview. Blaze was the 27-year-old Davidovich's breakthrough role. She appeared in five more features before reuniting with Shelton to play a young woman abused by the title character (played by Tommy Lee Jones) in Cobb (1994). Although she's not lacked for acting opportunities, she's also played in every Shelton-directed feature since Cobb, including Play It to the Bone (1999); Dark Blue (2002); Hollywood Homicide (2003) and the TV movie Hound Dogs (2011). Together for more than 20 years, they've utterly failed to make their personal life (or that of their kids) the stuff of infotainment headlines. Apparently not a Hollywood marriage.

Wednesday, December 13, 1989.
BLAZE. Based on the 1974 book Blaze Starr! My Life as Told to Huey Perry. Music by Bennie Wallace. Written and directed by Ron Shelton. Running time: 116 minutes. Mature entertainment with the B.C. Classifier's warning: occasional nudity, suggestive scenes and very coarse language. IN A WAY, HE PREFIGURED JFK. During a formal dinner party for his "yes men" and their ladies at the New Orleans Roosevelt Hotel, Louisiana Governor Earl Kemp Long (Paul Newman) introduces Miss Blaze Starr (Lolita Davidovich), "a performing artist on the local cultural scene."
In a way, he was more honest than JFK. The younger brother of murdered "Kingfish" Huey P. Long, Earl was the sort of down-home politician who'd turn up on Bourbon Street and take a ringside table at the Sho-Bar, wherein bodacious beauties, such as Blaze, practiced the art of the striptease.
He certainly shared JFK's reputed taste for women. It's 1959 and, from the moment he sees them, Earl likes Blaze Starr's moves.
He even likes the way she rebuffs his moves. "I do have a weakness for tough-minded, iron-willed, independent women with big hooters," he says after their first meeting.    There is something quintessentially American about the populist governor's sentiments. In the telling of his tale, though, writer-director Ron Shelton offers something unexpectedly familiar.
Blaze, based on the autobiographical Blaze Starr! My Life as Told to Huey Perry, is the story of a woman who combines a sweet spirituality with an earthy sexuality. She becomes involved with a professional male, who is near the end of his career in a game characterized by male bonding.
Their relationship is shaped by forces beyond their control, but they cope with wit and style, and find a kind of personal salvation with one another.
Add to that outline "the education of a talented rookie," and we could be talking about Bull Durham (1988). The story of Annie Savoy's devotion to the "Church of Baseball," it was Shelton's directorial debut feature and one of the great movies of the 1980s.
Drop the rookie from the plot, and it's Blaze; in Shelton's own words, "a movie about Earl Long from Blaze Starr's point of view." Though it's based on fact, "we took poetic licence and historic liberties."
Here, Southern political backrooms replace locker rooms. Campaign strategies and social issues substitute for "the greatest show on dirt."
It is, truth to tell, a more sober and less entertaining fable. Shelton's "liberties" and the essential seriousness of the backdrop work against his comic efforts.
Bull Durham was a treat because its lovers shared an obsession, and a faith (baseball). The attraction between the tub-thumping, retirement-aged governor and the 28-year-old professional peeler is less well established, less believable as a romantic fantasy, and considerably less wholesome.
Though we can't help but be interested in any picture that features Paul Newman as a scrawny, half-crazed relic of 1930s radicalism, the results are less than epic. Director Shelton, who hit a homer his first time at bat, singles to first on this outing.
*     *     *
POLITICAL PASSIONS — Ron Shelton's Blaze Starr is a stand-by-your-man kind of woman. The real Blaze (born Fannie Belle Fleming) may have been less so.
In a 1976 report, she claimed carnal knowledge of a pre-presidential John Fitzgerald Kennedy, a liaison that would have occurred during her involvement with Earl Long.
"I made it with (Kennedy) standing up in a closet," Blaze said. She recalled that the memorable meeting occurred during a noisy party in New Orleans sometime before his presidential inauguration.

Afterword: Fannie Belle Fleming, who was 56 when Blaze was filmed, plays a cameo role in the picture as a character named Lily. Her single previous feature film appearance was in tireless exploitation director Doris Wishman's 1962 movie Blaze Starr Goes Nudist, in which she had the title role. Now [2014] in retirement in rural West Virginia, the 82-year-old has a company — Blaze Starr Gems —  and until recently maintained a website (now abandoned) through which she marketed her own line of jewelry. With Blaze, Paul Newman (whose famously long and loving marriage to actress Joanne Woodward would last to the end of his life) entered the revered character-actor phase of his career. Despite the relish he shows for his role, the film received only one Oscar nomination (for Haskell Wexler's cinematography), and no win.