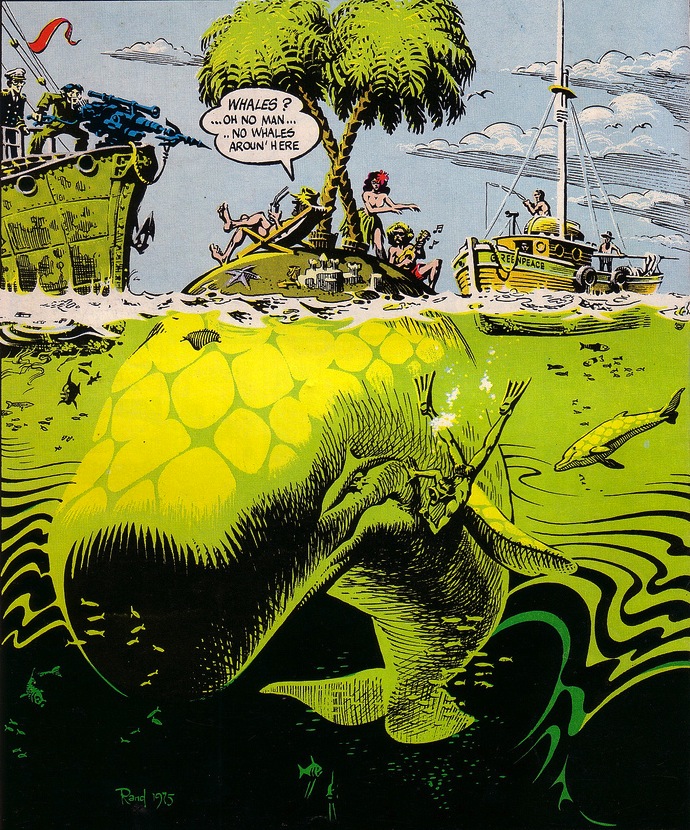 "Whales?" says the man on the island. "Oh no man . . . no whales aroun' here." The late Rand Holmes celebrated the Greenpeace voyagers with this 1975 cover for Vancouver underground newspaper the Georgia Straight. It was later sold as a poster in support of the Vancouver-based Greenpeace Foundation.


Easton gets shot seen around the world


As of this posting (Thur., Oct. 24), Russia has reduced the charges against 28 Greenpeace activists — the captain and crew of the Dutch-flagged vessel Arctic Sunrise — and two journalists who, nonetheless, remain in Russian custody. Arrested September 18 during a protest in the Barents Sea, they are in a tradition of confrontational engagement that began 39 years ago, when the Vancouver-based Don't Make a Wave Committee changed its name to the Greenpeace Foundation. The early history of the group included protests against U.S. nuclear testing on the Aleutian island of Amchitka and French bomb tests at the Moruroa Atoll. Then, in 1974, the focus shifted to the threat posed by commercial whaling to the existence of the largest mammals on earth. Recognizing the inherent drama in Greenpeace's approach, a trio of young filmmakers formed an independent production company to document the story. The resulting picture, Greenpeace: Voyages to Save the Whales, provided us with an intimate look at the issue and the individuals who put their lives on the line on the high seas.

Come on, let's get 'em,
Let's dry up the seas;
They're there to be taken,
Like women and trees.
— Greenpeace Ballad

WHALES. Since men first went down to the sea in ships, they have been both fascinated and frightened by whales. The largest living creatures, the huge sea-going mammals were once regarded as monsters.
Eventually, technology increased man's courage and gave him mastery over the natural environment. All things on earth seemed to have been put there for his use. The monsters became a crop to be harvested. Whaling became an industry.
Today, that industry is embattled. A new generation insists that we must live in harmony with our environment. Science argues persuasively that whales are magnificent creatures that may be every bit the equal of man.
The ideas continue in conflict. Meanwhile, the tragic hunt goes on. Several species of whales are threatened with extinction.
In 1974, the Vancouver-based Greenpeace Foundation decided to do something. The group that had said "no" to U.S. and French atomic tests would now say "no" to Russian and Japanese whaling.
Its strategy would be, as it had been with the bomb tests, one of open confrontation. The Greenpeacers would place their bodies between the hunters and the hunted and their faith in the power of public opinion.
It was the kind of drama that you would expect to see in a movie. The prospect of making such a movie appealed to filmmaker Michael Chechik.
Chechik first heard about the Greenpeace plan as a member of the audience at the Foundation's 1974 Christmas whale show. Early in January he met with Greenpeace spokesman Bob Hunter.
Chechik, 31, an alumnus of the Simon Fraser University Film Workshop, wanted to go to sea with Hunter and his ecological guerrillas. More than that, though, he wanted to go as an independent reporter. The Greenpeace Foundation would have no part in his film's financing, nor would they have any creative control.
Hunter, a former Vancouver Sun newspaper columnist, agreed. Chechik, together with fellow workshop graduates Fred Easton, 29, and Ron Precious, 30, formed Greenpeace Film Productions, a limited company founded for the purpose of producing Greenpeace: Voyages to Save the Whales.
Between them, the Canada Council and the B.C. Cultural Fund made cash grants to the project of some $17,500. The National Film Board donated 13,000 feet of raw film stock. (Before they were done, they would shoot approximately 35,000 feet, or 15 feet for every one used in the final film.)
An additional source of funds, one that would eventually add $10,000 to their working capital, was the sale of one-time-use film clips to news services. In March, 1976, both the CBC news show The Fifth Estate and CTV's W-5 produced items on the anti-whaling movement. Both used Greenpeace Film footage. During 1978, the National Geographic Society will produce a whale special and it, too, will feature Greenpeace material.
More than two years In the making, Greenpeace: Voyages will have its Canadian premiere Sunday evening [June 26, 1974] at the Vancouver East Cultural Centre. Previewed March 7 at SFU, the 53-minute feature takes a surprisingly cool, even-tempered look at a highly-charged international issue.
On April 27, 1975, the 65-foot fishing boat Phyllis Cormack set off in search of the whalers. Before we meet her, though, we are introduced to the creatures central to the whole controversy, the whales.
"Since 1920," narrator Don Francks informs us, "more than two million (have been killed), leaving five of the 10 species of great whales endangered." Whaling, it seems, is long past the wooden ships/iron men era romanticized in Moby Dick.
Newsreel footage from the immediate post-war period introduces us to the block-long factory ships, each one a sea-going slaughterhouse, each attended by a pack of gunboat-sized killer ships.
Regulating this oceanic industry is the 14-nation International Whaling Commission, a body that includes among its members Canada and the United States. Inasmuch as many delegates to the commission are whaling industry executives, the IWC is decidedly short on sympathy for the whales.
Not so Greenpeace. Noting that Japan and the Soviet Union "harvest" 80 per cent of the current whale "crop," the Vancouver-based eco-crusaders decided to seek out the Pacific whaling fleets of those nations. If necessary, they would shield the whales with their own bodies.
It would be necessary. Sixty miles off the California coast, the Cormack encountered the Soviet factory ship Dalniy Vostok. Hunter and Greenpeace member George Korova clambered into a speedy Zodiac powerboat to confront one of the sharp-prowed killer ships.
Cameraman Easton followed in a second Zodiac. The film crew was down to its last 1,000 feet of film. Would the Russian dare shoot?
Damn right he would! As Easton peered through his viewfinder, a 100-pound harpoon rocketed over Hunter and Korova, seeking the whale they hoped to save. It was a shot that was not only heard, but seen round the world.
Their film might have ended right there. To their credit, though, the film-makers were interested in a broader perspective. They wanted to examine the effects of this high seas drama.
A year later, during the summer of 1976, they joined the second voyage. This time the Cormack was accompanied by the 153-foot James Bay, a former Royal Canadian Navy minesweeper. Some realistic conclusions are suggested.
We are shown that, in the real world, a single act of bravado is never enough. Those who would bring about change must renew their resolve and continue the confrontation. The fight is far from won.
The film-makers, of course, pursued their own purposes with the same dogged persistence as the Greenpeacers. The result is a praise-worthy documentary that makes its points all the more effectively because it makes them with restraint.
Last Sunday (June 19, 1976), the British Broadcasting Corporation beamed Greenpeace: Voyages to Save the Whales to a prime-time television audience in the United Kingdom.  Monday (June 20, 1976), the IWG opened its 1977 meeting In Canberra, Australia.
This Sunday (June 26, 1976), Vancouver will get its first intimate look at one of the most moral, humane actions ever to take place under a Canadlan flag. Screenings, at the VECC, are at 7:30 and 9:30 p.m.

FAME TO CLAlM: Who wrote the mock macho whaling shanty quoted at the beginning of this article? His words, arbitrarily titled "Greenpeace Ballad," capture many of the emotional nuances of the whaling issue and his music is used effectively throughout the film, Greenpeace: Voyages to Save the Whales.
According to the movie's co-director, Ron Precious, the film-makers want to pay him his due and provide him with a screen credit. Unfortunately, they don't know who he is.
"He recorded his song at the Greenpeace send-off benefit at the Habitat forum site in June,  1976," Precious says. "He came on near the end of the program. Nobody paid much attention to his song until a long time later. When we played back the tape it turned out to be exactly what we were looking for.
"His music made an important contribution to our film," says Precious.  "We'd like to find him and thank him."

AFTERWORD: "We never actually found him," Michael Chechik told me in a telephone conversation yesterday (October, 23, 2013). Even so, a screen credit was awarded to the the unknown artist, whom the filmmakers called Wizz. "It was as close as we could get," Chechik recalled. The winner of numerous honours, including the 1977 Canadian Film Award for Best Documentary, Greenpeace: Voyages to Save the Whales was the beginning of a life-long career in independent film for Chechik. The president of Vancouver-based Omni Film Productions, his recent work for television has included the five-season teen drama Edgemont (2001-05), three-seasons of Robson Arms (2005-08) and my own personal favourite, Primeval: New World (2012-13). Currently, he is executive producing two aviation-themed series, the History Channel documentary Ice Pilots NWT (which began its fifth season yesterday), and Arctic Air, a CBC-TV drama now filming its third season.