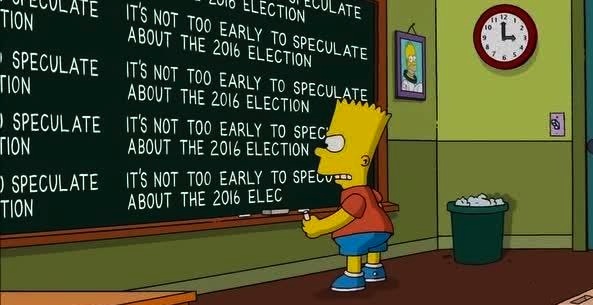 Bart learns that "it's not too early to speculate about the 2016 election" in a 2011 episode of The Simpsons.

Hail to the Chief


You'd hardly know it from the news, but today (November 3) off-year elections are being held in the U.S. With all the attention on the presidential race, a vote still a year away, Reeling Back offers this quiz testing your knowledge of Canadians who've played POTUS in the movies.

CONFLICTS IN THE CORRIDORS of power have inspired many a film-maker. From the beginning, Canadians have been involved in making such dramas come alive, bringing authority to the POTUS — President Of The United States — role in a variety of screen incarnations. From the brief descriptions given below, identify the actor whose character found his way into the Oval Office.

1.     He played an historical U.S. president in director D.W. Griffith's farewell film, Abraham Lincoln (1930), and an imaginary one named Judson Hammond in the idealistic fantasy Gabriel Over the White House (1933). He also had the role of Ambassador Joseph E. Davies, entrusted by Franklin Roosevelt with a Mission to Moscow (1943).

2.     The Lincoln-Douglas debates, the historical confrontation between presidential hopefuls Abraham Lincoln and Stephen Douglas, were foreshadowed in their clash for the affections of Mary Todd. In the 1940 film, Abe Lincoln in Illinois, both Lincoln and Douglas were played by Canadians, one of whom went on to reprise the Lincoln role in 1962's How the West Was Won.

3.     As Francisco Madero, president of Mexico, he inspired the loyalty of Yul Brynner's bandit-patriot in Villa Rides (1968). As Elihu Root, Nobel Peace Prize-winner, he was Woodrow Wilson's personal ambassador to the embattled court of  Russia's Nicholas and Alexandra (1971). He is best remembered, though, in the title role of Wilson (1944), a moving portrayal of Woodrow Wilson, the president who led America during the First World War.

4.     As William Howard Taft, America's first golfer president, he is present to see Shia LaBeouf's Francis Ouimet compete in the 1913 U.S. Open, in 2005's The Greatest Game Ever Played. Though related to a performer with more famous presidential credits, he remains the only actor to have played the obscure Taft on the big screen.

5.     He played John F. Kennedy, the president who presided over a nuclear showdown with the Soviet Union in October, 1962. Remembered as the Cuban missile crisis, it was the subject of director Roger Donaldson's historical thriller Thirteen Days (2000). He then played an unnamed fictional president, one sympathetic to Nicolas Cage's cryptological adventurer questing for the truth behind the Lincoln assassination in 2004's National Treasure: Book of Secrets.

Bonus 1.    When John Wayne set out to produce his 1970 television "special" Swing Out, Sweet Land, a Thanksgiving variety show celebrating America, he called upon two Canadians to portray the presidents George Washington and John Adams. Each brought a properly commanding presence to his role. Name them.

Bonus 2.    As the incumbent fictional president William Haney, he is third billed after Jack Lemmon and James Garner, who play former presidents Russell Kramer and Matt Douglas. They all appear in director Peter Segal's 1996 comedy thriller My Fellow Americans. He came to fame, though, doing satirical portrayals of real presidents Richard Nixon and Jimmy Carter on television's Saturday Night Live.

The above is a restored and updated version of Quiz 17, one of 78 included in The Canadian Movie Quiz Book by Michael Walsh, originally published in 1979. For additional information on this archived material, please visit my FAQ.