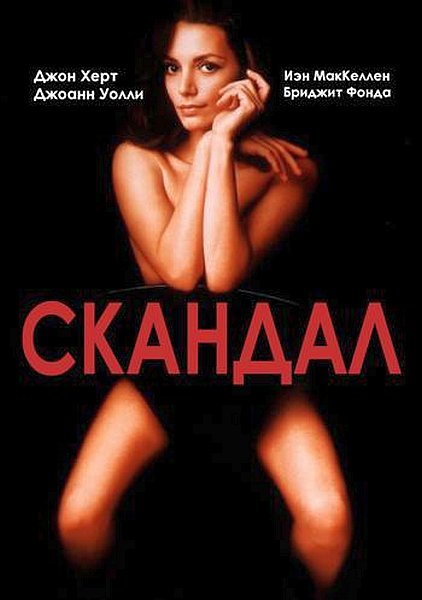 The poster for the 1989 film Scandal, seen here in its Russian version, featured Joanne Whalley as Christine Keeler, in a pose that recalls the 1963 Morley portrait.


British misbehaviour in the Hollywood style


On this day (June 5) in 1963, Britain's 48-year-old Secretary of State for War, John Profumo, announced his resignation. Around the same time, the 21-year-old London showgirl Christine Keeler was negotiating the rights to the story of her involvement with Profumo, for a movie tentatively titled The Keeler Affair. Among the biggest news stories of its year, the political scandal involved hot young women, randy older men, Upper Class excess and the possibility of a major international security leak. Lives were ruined and reputations destroyed as the tabloid press laid bare all the shocking details. It would be an issue in the 1964 general election, in which Harold Macmillan's Conservative Party went down to defeat. In the midst of it all, Hong Kong-born celebrity photographer Lewis Morley persuaded Keeler to sit astride a plywood chair for a nude portrait. Intended to promote a 1963 film (that when made was banned in England), the photo became famous (and the chair is now in the collection of the Victoria and Albert Museum). In the years that followed, Keeler co-authored five books, each one offering a variation on her story. Because it was based on her 1989 memoir Scandal!, the feature film Scandal is her own preferred movie version.

Friday, May 19, 1989.
SCANDAL. Written by Michael Thomas. Suggested by Christine Keeler's 1989 memoir Scandal! Music by Carl Davis. Directed by Michael Caton-Jones. Running time: 106 minutes. Restricted entertainment, with the B.C. Classifier's warning: some nudity and suggestive scenes.
SEX?
As Stephen Ward (John Hurt) tells his live-in girlfriend, showgirl Christine Keeler (Joanne Whalley-Kilmer), "there's no harm in it, so long as nobody gets hurt."
Or, as Christine later tells her co-worker at Soho's Cabaret Club, Marilyn "Mandy'' Rice-Davies (Bridget Fonda), "there's no harm in it. We're all flesh, you know."
The teen-aged Keeler is living with middle-aged Ward, a successful London artist and osteopath, when he introduces her to the Soviet naval attache, Eugene Ivanov (Jeroen Krabbe).
Hello, sailor. There's no harm in it . . .
They're all enjoying the hospitality of Lord Astor (Leslie Phillips) at his Cliveden Estate. There, she runs into Britain's war minister, John Profumo (Ian McKellen).
Hello, soldier. There's no harm . . .
Between July 1960 and August 1961, Keeler shares her bed with both men. In early 1963, angry and despondent, she tells her story to Kevin (Keith Allen), an apparently sympathetic tabloid newspaper reporter.
Suddenly, there's harm. The story of "the Minister, the Model and the Russian Spy'' becomes a major international Scandal.
Funniest thing. In director Michael Caton-Jones's film, the minister's appearance is relatively brief. No attempt is made to explain, or understand, Profumo's involvement with his young paramour.
The Russian spy's appearance is even briefer. Indeed, it's never established that the idea of espionage ever entered the stolid Ivanov's head.
Scandal, says Caton-Jones, "is a love story in the purist sense.'' In it, he offers us the tale of Steve and Chris, a romantic tragedy on the order of Sid and Nancy.
Filling in the details is screenwriter Michael Thomas, a rowdy Australian who admits to a lifelong fascination with good-time girl Keeler. Originally developed as a BBC-TV mini-series, it was trimmed to theatrical-feature length when the British public broadcaster backed away from the project.
What's left resembles nothing so much as a Hollywood-style adaptation of a "big bold novel,'' the sort of slick, lip-smacking roman a clef usually confected from something by Harold Robbins.
Actress Whalley-Kilmer (who hyphenated her name after marrying actor Val Kilmer, her co-star in Ron Howard's 1988 fantasy Willow) lacks the allure ascribed to Keeler in the script. (Model Gloria Jones doubles for her in the required nude scene.)
Fonda, the daughter of actor Peter, is more convincing as the malicious Mandy. Jane Fonda's niece also has the self-confidence to eschew the use of a body double.
Lost in the general wreckage is Hurt's carefully considered, finely wrought portrait of Ward, a character that he invests with a tortured dignity.
*   *   *
SCANDAL REBUILT: In the opinion of our neighbours to the South, the Brits rather overdid it.
According the the MPAA, the folk empowered to rate films in the U.S., the original Scandal's sex scenes were steamy enough to warrant its big, bad X.
No! no!, said Miramax, the picture's American distributor, anything but that! In order to qualify for the more lenient R-rating, Miramax ordered up a less explicit version. So "reconstructed," Scandal won its R and passed into release.
Cineplex Odeon Films, Scandal's Canadian distributor, acquired its prints of the film from Miramax. And that's why Her Majesty's loyal subjects on this side of the Atlantic are viewing a British picture cut to meet the needs of the U.S. market.

Afterword: In England, sexual licence went from being scandalous to swinging in a matter of two years. With the simple addition of drugs and rock'n'roll music, the script changed. London became the place to be in 1965. Mini skirts were mod, and British bands became a cultural invasion force. It's possible that Stephen Ward and his circle were precursors of what was to come, though there were few happy endings to their stories. Ward died of barbiturate poisoning, an apparent suicide, days after his 1963 conviction on morals charges. John Profumo, his public life at an end, spent his remaining days — and there were many, as he died in 2006 at age 91 — atoning for his sins by doing good works in London's East End. After serving a nine-month prison sentence (for perjury), Christine Keeler endured two short-lived marriages. Now 72, and living alone in public housing, she survives on selling and reselling her story. By contrast, the Welsh-born Mandy Rice-Davies seems to have enjoyed being notorious. Two years younger than Keeler and wealthy (the result of her 1966 marriage to Israeli businessman Rafael Shaul), she pursued a career as an actress, appearing in a dozen feature films. Last year, she acted as an "advisor" to Andrew Lloyd Webber in the writing of his 2013 West End musical, Stephen Ward.