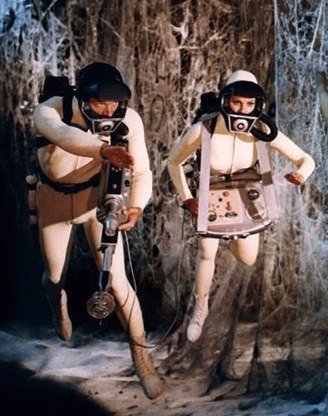 
Loncon 3, the 2014 World Science Fiction Convention, opens today (August 14) in Britain's capital city. Its Guests of Honour include John Clute, the man that Neil Gaiman calls "the best critical writer on SF we've had." On his website, the Toronto-born Clute notes that he spent the years 1956 to 1964 in the U.S., where he earned his B.A. and married Judith James. "Since 1968 I have lived in London," he tells us, omitting the nearly four years he and Judith spent in his old hometown, where he and I were neighbours and fellow contributors to The Varsity, the University of Toronto's student newspaper. In those days, John was a man possessed of a crazy dream: that science fiction should be the subject of serious criticism. Today, he is the preeminent critic of a literary form that he helped to shape and legitimate. His five Hugo awards — for three subsequent editions of the ever-growing Encyclopedia of Science Fiction (1979, 1994, 2012) as well as for Science Fiction: The Illustrated Encyclopedia (1996) and The Encyclopedia of Fantasy (1998) — recognize his landmark contributions to the genre's institutional memory. In the mid-sixties, while John was writing astute, informed pieces on works such as Philip K. Dick's novel The Three Stigmata of Palmer Eldritch, I was reviewing the current popcorn pictures, among them 1966's Fantastic Voyage.

Friday, October 14, 1966.
FANTASTIC VOYAGE. Written by Harry Kleiner. Based on David Duncan's adaptation of a story by Otto Klement and Jerome Bixby. Music by Leonard Rosenman. Directed by Richard Fleischer. Running time: 100 minutes. JUST WHAT SORT OF a movie is this Fantastic Voyage, now playing at [Toronto's] the Imperial Theatre?
Well, to begin with, it's the sort of movie that has its story serialized in The Saturday Evening Post. A novelization has since appeared in paperback under the name of famous science-fiction writer Isaac Asimov.
The story follows every child's silly wish to be tiny and follow the food down his own throat. This Voyage is conducted in the midget sub Proteus, which is reduced to microscopic proportions and injected into the bloodstream of stricken scientist Jan Benes (Jean Del Val), a recent defector from the Soviet Union who has just barely survived an assassination attempt.
Proteus contains a surgical team that will, it's hoped, clean up on the nasty, and otherwise inaccessible, blood clot in Benes's brain that threatens to end the learned man's life.
The team is headed by surly, independent Dr. Peter Duvall (Arthur Kennedy). Determined to pull his patient through come hell or white corpuscles, he has, as a matter of convention, a beautiful young assistant.
Played by cover girl Raquel Welch, Cora Peterson does not appear terribly involved in the whole thing until a lot of DNA-starved antibodies attack her. Then the leading lady has the good sense to let her costume do the acting.
Fearing treachery en route — perhaps from some over-zealous red blood cells? — the government sends along security man Charles Grant (Stephen Boyd). Having served a long apprenticeship playing Charlton Heston, Boyd has moved into a new role: Sean Connery.
The villain, it turns out, is the ship's navigator, blood circulation specialist Dr. Michaels (Donald Pleasence). The fiend's unmitigated evil is demonstrated by a complete inability to contribute any verses at all to the screenplay's lengthy poem on the wonders of God's creation.
"Let me know when we pass the soul," he sneers at his enraptured crewmates.
The whole operation takes place deep within the underground complex of a fabulous, super-secret, quasi-military government research laboratory. While the plasmariners are busy navigating through arteries, their fate is being monitored by project head General Carter (Edmond O'Brien), who sweats out their whole Fantastic Voyage from behind a radar console.
Directed by Richard (20,000 Leagues Under the Sea) Fleischer, Fantastic Voyage was designed as a major motion picture. Its much-publicized set design, striking and accurate as it may be, remains an expensive superficiality.
The story is still cold war space opera set in the blood stream.

Afterword: Yes, the above review can best be described as "undergraduate," which I was. In the same issue of The Varsity, John Clute offered a serious consideration of Causeway 1/4, the debut issue of an ambitious new Canadian literary journal that was making waves with an examination of erotica and censorship that included photos by the controversial artist Dennis Burton. Clute, the man being honoured at Loncon 3 this week, was ever ahead of the curve while remaining in touch with the moment. John may have been the first person to make Marvel Comics the subject of genuine cultural criticism. His November 1966 Varsity feature, called The Merry Marvel Marching Society, was an eye-opener for me, and a cheerful harbinger of so much to come.
As for Fantastic Voyage's inherently silly miniaturization theme, director Joe Dante had the good sense to play it for laughs 21 years later. His 1987 feature Innerspace starred Dennis Quaid as a military micronaut injected into the body of hypochondriac civilian Martin Short. Hilarity ensued.