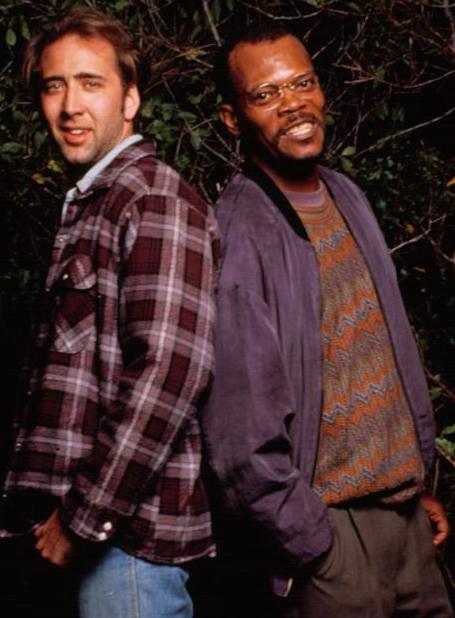 History made on the run


Dated comedy with a timely message


An enthusiastic practitioner of what he calls "Nouveau Shamanic" acting, Nicolas Cage is famous for making a meal out of every performance. Born on this day (January 7) in 1964, he exudes underclass discontent in director E. Max Frye’s 1993 men-on-the-run comedy Amos & Andrew.

AMOS & ANDREW. Music by Richard Gibbs. Written and directed by E. Max Frye. Running time: 96 minutes. Mature entertainment with the B.C. Classifier’s warning: occasional very coarse language and suggestive scenes. DO WE HAVE TIME for a history lesson?
Andrew Sterling (Samuel L. Jackson) doesn't think so. On the run and in fear for his life, he can accept the fact that he's partnered with a really gross guy named Amos Odell (Nicolas Cage).
This evening, he's gone along with a burglary, an auto theft and even the taking of hostages. All Sterling asks is that his criminal companion not refer to them as Amos & Andrew.
Do you get the joke? Built into the title of writer-director E. Max Frye's predictable race relations comedy is an entertainment history reference, one that may zip right by younger filmgoers.
Indeed, his picture's basic comic premise seems more attuned to the early 1970s than the 1990s. It introduces us to Sterling, a "noted black author, scholar and celebrity,” who has just bought a summer home on exclusive Watauga Island.
Arriving after dark, he is mistaken for a burglar by his new neighbours, Phil (Michael Lerner) and Judy Gillman (Margaret Colin). Over-reacting, the local police bungle the situation to the point that it becomes a media event.
Because it's an election year, politically ambitious police chief Cecil Tolliver (Dabney Coleman) attempts a cover-up. Inept petty criminal Odell is sent in to take Sterling hostage, and then surrender to the authorities.
Naturally, the African-American Establishmentarian and the po' white homeboy become allies. Frye even manages to contrive a scene in which they run cross-country, handcuffed together, in a visual reference to 1958’s The Defiant Ones.
Frye, who wrote 1986’s Something Wild for director Jonathan Demme, specializes in extreme characters and desperation humour. The accomplished Sterling, for example, considers himself "the angry voice of my people."
Odell, no stranger to underclass discontent, tells him that "for all your talk, you're about the whitest black man I ever knew.” Can these two just get along long enough to get away?
It's silly stuff but, to his credit, Frye has put together a cast that gets away with it. Coleman, expert at comic opportunism, plays the sort of character who manages to paint himself into ever smaller corners.
By contrast, Jackson, a regular in Spike Lee films, gets to do little more than project self-important outrage as his co-star runs away with the picture. As the grungy, dim-witted Odell, Cage has a rodent-like amiability.
Playing it to the hilt, Cage turns a loser into a comic winner, a character with enough wit to carry Frye's dated comedy even without a history lesson.

◼︎    ◼︎    ◼︎
AMOS AND WHO? – What Sterling didn't have time to explain to Odell is the historical significance of Amos ’n’ Andy, an American radio phenomenon during the 1930s and 1940s.
Written and performed by two white men (Freeman Gosden and Charles Correll), it was a comedy about life in black Harlem. Despite immense popularity in their own time, Amos Jones and Andy Brown are remembered, along with Uncle Tom and Uncle Remus, as figures of profound political incorrectness.

Afterword: It gets worse (and more relevant to the news of the day). Amos ’n’ Andy creators Freeman Gosden and Charles Correll were, in the words of Wikipedia, “white actors familiar with minstrel (show) traditions." A fixture on American radio from 1928 to 1960, their show inspired a feature film in 1930 called Check and Double Check. They starred in it, wearing blackface to play Amos Jones (Gosden) and Andy Hogg Brown (Correll). There was even a four-season, 78 episode television series (1951-1955), one that featured an all-black cast. But wait; there’s yet one more embarrassment. The theme music, heard in all versions of the show, was “The Perfect Song,” borrowed from the score of the profoundly racist 1915 movie, The Birth of a Nation.
The 1993 feature Amos & Andrew is the only directorial credit for the Oregon-born screenwriter Eric Max Frye, but its underlying message — racialism remains deeply embedded in American society — unfortunately remains true to this day. In the above review I complained that the “picture's basic comic premise seems more attuned to the early 1970s than the 1990s.” At the time, I believed that in the run up to the millennium real progress was being made. Who knew that in mid-2019 the Los AngelesTimes would report “The hashtag #LivingWhileBlack went viral on social media in the last two years as videos proliferated of incidents around the nation in which white people called police on black people going about their everyday activities.” Sadly, the Amos Odell character’s “underclass discontent” seems to have become the driving force behind President Donald Trump’s “Make America Great Again” movement.
A performer capable giving “dim-witted Odell . . . a rodent-like amiability,” Nicolas Cage has made a career of doing things his way. Just weird enough to be a tabloid press magnet, director Francis Ford Coppola’s rebellious nephew also has the self-discipline to remain a compelling screen presence. I offered a brief profile of Cage in my review of David Lynch’s 1990 feature Wild at Heart. An actor and serious comic book fan, Cage turns 56 today (January 7, 2020).