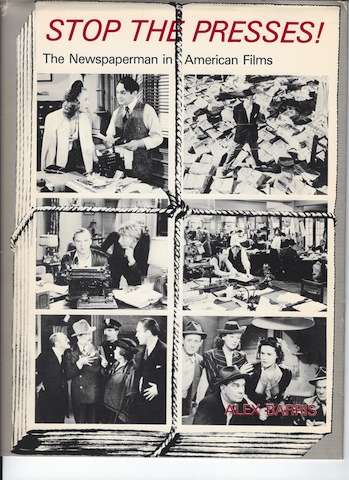 HISTORY WRITTEN ON THE RUN


The tale of the newspaperman in American films was a great story waiting to be written . . . and then Alex Barris, a former Toronto Telegram reporter and entertainment columnist, went out and did it, chronicling five decades of deadlines.

Monday, 29 November, 1976
STOP THE PRESSES! The Newspaperman in American Films. By Alex Barris. A.S. Barnes and Company, Inc., 1976. 221 pp. Illus., Index. $17.50
A FEW YEARS AGO, when the Vancouver Press Club was still calling itself The Newsmen's Club of B.C., the chairman of the program committee began developing plans for a series of movie nights. The idea, as it was explained to me, was to show movies about newspapering.
Could I, as a club member, suggest some possible titles, he asked. Better yet, could I make up a list of about a dozen pictures?
"No problem," I said, putting my foot up on the bar rail, delighted at the opportunity to hold forth on one of my favourite subjects. "During the 1930s and 1940s, the reporter was a standard movie hero, every bit as popular as the detective or the cowboy."
"'Zat so?" he said. "Shouldn't be too hard putting together a list for us then, should it?"
He got his list. Although I eventually called it quits at 106 titles, I knew there were a lot more. Someday, I thought to myself, somebody is going to write a whole book on this fascinating subject.
That somebody turned out to be Alex Barris, author of Hollywood's Other Men and Hollywood's Other Women (both 1975). While I was putting together my club list, film buff Barris was writing Stop the Presses! The Newspaperman in American Films.
No mere list, his book is a carefully considered look at "Hollywood's Press," the images and myths that the movies have created about journalism and the world of the working reporter. According to Barris, the basic pattern was set in 1931, in a wise-cracking comedy called The Front Page.  It was about the Chicago press corps, circa 1928. "They drink, play cards to stave off boredom, insult each other, tell tall tales, show an irresistible lack of respect for all public officials, alibi for each other's absences (as when an irate wife is searching for an errant husband) and, most of all, hate their editors with a burning passion . . .
"Next to the fanatic hatred for editors, the quality most common to (these) reporters was the kind of devotion to duty that would make D'Artagnan seem like a shirker . . .
"Thus, it became part of the mythology about American newspaper reporters that The Story was always their prime consideration, that to get The Story, any means were justified, any deceit pardonable, any extreme understandable. Editors, naturally, felt the same way, adding one more touch of fanaticism: any number of hours worked by a reporter in the pursuit of The Story should be regarded as in the line of duty."
If real newspapermen were offended by the less-than-faithful representation of their profession, they generally suffered in silence. It was well known, as Barris points out, that The Front Page had been authored by a pair of ex-newsmen, former Chicago reporters Ben Hecht and Charles MacArthur. The stage play, reworked as a screenplay, set the Hollywood standard.
Barris, a former Toronto newsman and entertainment columnist, chronicles five decades of movie journalism. He shows us the reporter in all of his filmic incarnations: crime-buster, scandal-monger, crusader, foreign correspondent, sob sister, editor, publisher (he reminds us that Citizen Kane, considered by many the greatest movie ever made, was the story of a successful newspaper publisher), human being and, occasionally, villain.
In all, Barris comments on about 300 films released between 1921 and 1976. Making his book all the more attractive is the fact that he includes a production photo from virtually every movie he mentions.
When he began working on Stop the Presses!, Barris thought that the age of the newspaper movie had pretty well come to an end. A dismal third remake of The Front Page in 1974 seemed to confirm it and, incidentally, provide him with a neat conclusion to his text.
Then, with his book already at the printers, Warner Brothers premiered All the President's Men and Barris, faithful to the code of The Story, had to call "stop the presses." Recalling his galley proofs, he wrote a note on "one of the finest newspaper movies ever made," and added it right on deadline.
In doing so, though, he changes the whole tone of his final chapter. Suddenly, Barris is doing more than bidding farewell to an era that is past. His Stop the Presses! now stands as an introduction to a whole new generation of newspaper movies. As the old reporter himself happily admits, "they aren't quite ready to write —30— yet."

AFTERWORD:  Lifelong film buff Alex Barris was part of the first generation of newspaperman to find a second career in television broadcasting. In 1956, he was the host of The Barris Beat, a TV chat show produced and directed by Norman Jewison for the CBC's national network. We crossed paths at the Toronto Telegram, where he was a much-respected columnist and I a rookie reporter. He left for Hollywood in 1969, where he worked as a television writer and producer. He also wrote four generously illustrated film books — Hollywood's Other Men, Hollywood's Other Women (both 1975), Stop the Presses! and Hollywood According to Hollywood (1978) — all of which remain a delight to read to this day. Alex died in Toronto in 2004 at the age of 81.