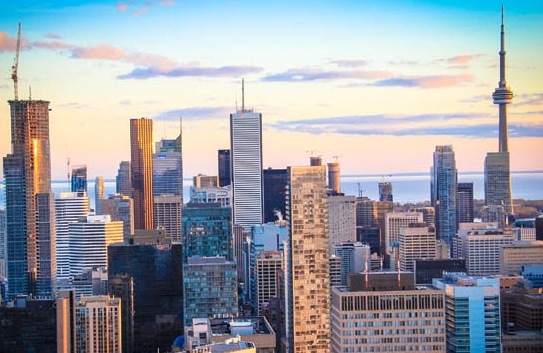 The Toronto skyline looking south, as did many of our Queen City Players.


Incorporated on this day (March 6) in 1834, the City of Toronto eventually became the place to be from for generations of performers with big-screen ambitions. Test your knowledge of those Canadians who found fame in Hollywood with Reeling Back's Queen City Players quiz.

THE CITY THAT ROSE from the ashes of Muddy York (the British settlement that American raiders burned in 1813), has been called a number of things, from Hogtown to Toronto the Good. Among its nicer nicknames is The Queen City, the self-congratulatory sobriquet preferred by residents of English Canada's biggest city during the inter-war period. From the descriptions given below, identify the following Toronto-born film personalities:

1.    A Stratford Festival veteran, he managed to menace the hero of virtually every major television series, but nowhere was he meaner than in the 1964 thriller The Night Walker, a film in which he played poor, haunted Barbara Stanwyck's double-crossing dream  lover.

2.    One of the acting profession's all-time greats, he played everything from presidents (Abraham Lincoln; 1930) to prospectors (The Treasure Of The Sierre Madre; 1947).  He won posthumous recognition for his 1950 recording of  "September Song."

3.    A music hall comedienne, she won her reputation and a title — she is now known as Lady Peel — on the British stage. In between, though, she found time to work both in London (On Approval; 1944) and in Hollywood-made movies (Thoroughly Modern Millie; 1967).

4.    He made his screen debut as Sherlock Holmes (The Speckled Band, 1931), but most people will remember this screen veteran as Dr. Gillespie, medical mentor to Richard Chamberlain, television's Dr. Kildare (1961-65).

5.    Arguably the most popular screen star in film history, she was Cinderella (1914), Rebecca Of Sunnybrook Farm (1917) and Pollyanna (1920). They called her "America's Sweetheart" in the United States and "The World's Sweetheart" everywhere else.

6.    Whether playing cops (The Pyx, 1973) or cat burglars (The Return Of The Pink Panther, 1975), he exudes authority. In his best-known role he played the proud Austrian naval officer, Captain Von Trapp, the widower who won Julie Andrews's Maria in The Sound Of Music (1965).

The above is a restored version of Quiz 3, one of 78 included in The Canadian Movie Quiz Book by Michael Walsh, originally published in 1979. For additional information on this archived material, please visit my FAQ.