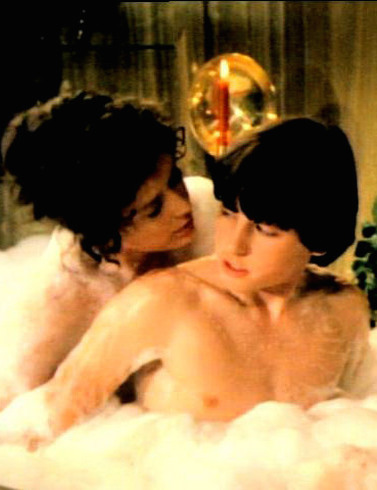 PRIVATE LESSONS. Written by Dan Greenburg, based on his 1969 novel Philly. Music edited by Robert Fawcett. Directed by Alan Myerson. Running time: 87 minutes. Restricted entertainment with the B.C. Classifier’s warning: frequent nudity, some suggestive scenes and dialogue. THE IDEA HAS A EUROPEAN feeling. Imagine yourself to be male, 15, and the sole heir to a substantial fortune.
Mama is dead. Papa is doting, and you have servants to fulfill your every need. Well, not quite every need.
You're beginning to take an interest in girls. Your interest becomes an obsession when the new housemaid arrives, a pretty thing apparently willing to give Private Lessons in the erotic arts.
The featured performer is definitely European.
Sylvia Kristel, 29, the Dutch-born star of the original Emmanuelle pictures, plays Nicole Mallow. A domestic worker in the family residence, Miss Mallow is a sexual Mary Poppins to Philly Fillmore (Eric Brown), the young master.
The movie, surprisingly, is American. Based on Dan Greenburg's 1969 novel Philly, it was directed by Alan Myerson on location in Phoenix, Arizona.
Europeans, for some reason, take special delight in first encounter films. They can handle such material sweetly (as in Lewis Gilbert’s 1961 feature The Greengage Summer), with gross good humour (Claude Berri’s La Premiere Fois from 1976) or with worldly cynicism (Salvatore Samperi's Malizia; 1973).
Americans are less adept with such material. The subject seems to embarrass screenwriters, and something akin to nervous laughter informs their efforts.
The results tend to look like Private Lessons. A supremely silly comedy, Myerson’s movie is so desperately afraid of its central premise that it builds in a mystery-thriller plot, complete with a demolition-derby chase scene.
It wouldn't do, you see, to have a precocious Philly seduce Miss Mallow. I mean, a 15-year-old just wouldn’t, would he?
Nor would it do to have Miss Mallow be genuinely attracted to the kid. Goodness gracious sakes alive, we all know that that sort of thing never happens.
Lacking faith in the power of basic human emotions (or, more likely, lacking any feeling for them), Myerson relies on good old blackmail. An illegal alien, Miss Mallow is being forced to participate in a plot to relieve Fillmore Senior's safe of some $10,000.
Since this is a comedy, all of the roles are played with an unbecoming broadness. Chauffeur Lester Lewis (Howard Hesseman), for example, is an utterly transparent villain while Philly’s knowing schoolmate, Sherman (Patrick Piccininni), is thoroughly obnoxious.
Philly, himself, is so uncomprehending that he probably suffers from a case of undiagnosed brain damage. The characters, in keeping with the current state of the North American economy, are inflated out of all proportion to their dramatic value.
This extends, believe it or not, to actress Kristel’s nude scenes. Lord knows, Kristel has never been averse to acting in the buff, but the slimline body that was good enough for three Emmanuelle projects is subject to some all-American know-how here.
The somewhat more bountiful body of a Miss Judy Helden doubles for Kristel’s in many of the picture’s fleshy close-ups. As in 1978’s Coming Home (in which the torso of Miss Kay Neer was substituted for that of Jane Fonda in her love scenes with John Voight), the overall effect is abetted by the film editor's art.
A shallow, essentially mindless sex fantasy, Private Lessons is currently enjoying remakable success at [Vancouver’s] Odeon and Fraser Theatres.

Afterword: Though she appeared in over 40 feature films, the career of Dutch actress Sylvia Kristel remained tied to Emmanuelle, her first starring role. The directorial debut of fashion photographer Just Jaeckin, the 1974 picture told the story of a French diplomat’s young wife who discovers a world of sensual pleasures in Bangkok, Thailand. Made at a moment when American popular culture was discovering “porno chic,” his sophisticated softcore sex film offered the “elegant erotica” alternative that allowed mainstream audiences to sample the X-rated experience without going all the way. Although Jaeckin would never make another Emmanuelle film, Kristel reprised the role in four theatrical sequels and seven made-for-French-TV movies. (Kristel reunited with Jaeckin just once, to play the title role in 1981’s Lady Chatterley’s Lover.) Her Hollywood years were disappointing, consisting of supporting roles in such features as 1979’s The Concorde . . . Airport ’79, and The Nude Bomb (1980). Though she had a success with Private Lessons, it only served to reinforce the idea that she was little more than a European sex kitten. She eventually returned to the Continent, where she worked in film and television for another 20 years. A heavy smoker from the age of nine, Sylvia Kristel died in 2012 of lung cancer. She was 60.
Private Lessons was Alan Myerson’s second feature film. The Scots-born director made his debut in 1973 with the creatively chaotic Steelyard Blues (1973), a counterculture comedy that benefited from a cast that included Donald Sutherland, Jane Fonda, Peter Boyle and John Savage. Thereafter, he made his living in TV, a three-decades-long career directing L.A.-based situation comedy show episodes. Aside from Private Lessons, made on location in Arizona, Myerson made just one other feature,1998’s Police Academy 5: Assignment: Miami Beach.