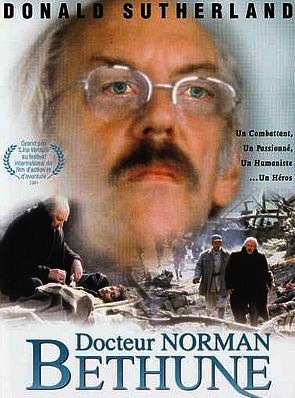 
Awkward telling of the passionate tale


The subject of a 2005 Vanity Fair magazine "Proust Questionnaire", Donald Sutherland was asked: "What historical figure do you most identify with?" The Canadian actor's answer: "Dr. Norman Bethune," his role in the 1990 feature Bethune: The Making of a Hero.

Friday, September 28, 1990
BETHUNE: THE MAKING OF A HERO, Written by Ted Allan. Music by Alan Reeves. Directed by Phillip Borsos. Running time: 115 minutes. In English and Chinese with English subtitles. SHE MARRIED HIM. Twice.
Frances Penney Bethune (Helen Mirren) recalls her husband's promise that "he would make my life miserable, but he would never bore me."
Canada's great unknown hero, Dr. Norman Bethune, made good on his promises. His story, an epic tale of battlefield medicine and left-wing politics, has fascinated and frustrated filmmakers since the early 1970s.
Director Phillip Borsos's version, from a screenplay by Bethune biographer Ted Allan, offers a confused, sometimes chaotic portrait of the uncompromising reformer.
Donald Sutherland's towering performance notwithstanding, the $18-million feature is a disappointingly pedestrian bit of screen history.


Friday, October 19, 1990.
THE OPENING RECALLS Richard Attenborough's Gandhi.
In their thousands, the Chinese gather to mourn Bai Chu En, the Canadian battlefield surgeon who worked and died with Mao Tse-tung's Eighth Route Army.
We see them in silent procession, following his body as it is borne down from the Wu Tai mountains.
In 1982, the motion picture Gandhi chronicled the life of an Indian lawyer, the moral force behind his nation's drive for independence.
Bethune: The Making of a Hero is the story of a Canadian doctor who combined medical skills with social ideals to become a symbol of selfless service to the Chinese people.
Little known in his own country, Norman Bethune is honoured as an official hero of Mao's revolution, a secular saint revered by a quarter of the world's population.
The process by which the film Bethune, a Canadian-Chinese-French co-production, came to be made also recalls Gandhi.
Like Gandhi producer-director Richard Attenborough, Bethune biographer Ted Allan was obsessed with the idea of bringing his hero's story to the screen.
Attenborough struggled for 20 years to realize his dream. For Allan, a left-wing journalist who served alongside Bethune in the Spanish Civil War, it would take the better part of his life.
In 1941, two years after Bethune's death in the Sino-Japanese conflict, Allan produced his first film treatment, selling it to 20th Century-Fox. Canadian-born actor Walter Pidgeon was studio boss Darryl Zanuck's choice for the Bethune role. Not unexpectedly, Fox lost interest in the project during the post-war "red scare."
The writer persevered, publishing his Bethune biography, The Scalpel, The Sword (co-written with Sydney Gordon) in 1952.
Allan, lacking Attenborough's administrative genius, could not produce or direct a feature film on his own. The realization of his dream would require other hands, and more than 40 years of deal-making and disappointments.
Attenborough's story has a Hollywood ending. A popular triumph, his Gandhi feature swept the 1983 Academy Awards.
Allan's tale lacks that sort of wow finish. Bethune, the film based on his original screenplay, is less exciting than its subject, a rather pedestrian historical biography that suffers from the absence of any grand artistic plan.
A book could be written — and probably will be — on Bethune's long and troubled history. What matters to the filmgoer, though, is the film that ultimately reaches the screen.
In its final form, Bethune is a reminder of better movies. The Gandhi-like opening is used to set up a Citizen Kane-like plot structure.
"My name is Chester Rice," says the picture's host-narrator. "I'm a journalist."
To get the story on Citizen Bethune, Rice (Colm Feore) conducts interviews that segue into flashbacks. Bethune's widow Frances (Helen Mirren) recalls their two marriages.
Various other associates describe incidents from his life in Montreal (where he practiced medicine), Saranac Lake (where he fought tuberculosis) and Madrid (where he introduced the practice of mobile blood transfusions). Interwoven is the tale of his heroic efforts on behalf of the beleaguered Chinese.
An awkward, occasionally confusing narrative structure subverts Donald Sutherland's intense, dynamic performance in the title role.  An artist as obsessed with Bethune as Allan, the actor appreciates the complexity of the character.
His Bethune reflects the passion and commitment of the man, an Ontario-born son of missionaries who found his inner strength, and used it to break free from the closed, colonialist Canadian mindset.
A humanitarian and medical innovator, Bethune was a doctor with a devotion to life, and an appetite for love. His need to make a difference found expression in physical bravery and intellectual achievement.
For the most part, these elements are lost in director Phil Borsos's depressingly clinical tip-toe through the tale's dramatic highlights. Lost, too, is the essence of Bethune.
Everything that Bethune was proceeded not from political ideology, but from the fact that he was a healer. This was at the core of his being, and is the key to his greatness. It is the story that remains to be told.
*     *     *
THE DOCTOR IS IN — Bringing Norman Bethune's story to the screen was never easy.
In 1964, Donald Brittain and John Kemeny collaborated on Bethune, an hour-long National Film Board documentary that portrayed the controversial physician as  a "hero of our time.'' The NFB disavowed their picture.
The same year, Chinese director Chang Chun-hsiang was completing principal photography on his feature film Doctor Bethune, with Baltimore-born Gerald Tannebaum in the title role. Filmed on location in the Wu Tai mountains, Chang's picture was intended as the official Chinese tribute to Mao's Canadian colleague. Caught up in the politics of the Cultural Revolution, it remained "incomplete" until 1977.
Actor Donald Sutherland's involvement with the part goes back to 1974, the year he portrayed Bethune in an "interview" with Patrick Watson on Watson's Global-TV series Witness to Yesterday.
Three years later, CBC-TV broadcast its own Bethune, an 88-minute drama directed by Eric Till. Again, Sutherland was featured in the role. His co-star was Kate Nelligan, cast as Frances Penney Bethune.

The above are restored versions of two Province reviews by Michael Walsh originally published in 1990. For additional information on this archived material, please visit my FAQ.

Afterword: Phil Borsos's 1990 feature was the last time anybody in the English-speaking world attempted to dramatize the life of Bethune either on television or in the movies. By contrast, in 2006, China Central Television  broadcast a 20-part drama series, Dr. Norman Bethune, to its estimated audience of 1.2 billion viewers. It's director, Yang Yang, who filmed the Canadian portions of the story on location in Quebec, found her Bethune in the Montreal-born actor Trevor Hayes. That book that could (and should) be written on the making of the Borsos film, has yet to be.