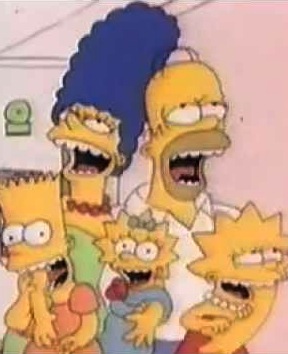 
Comics artist Matt Groening conceived The Simpsons as filler material for TV's The Tracy Ullman Show. Born on this day (February 15) in 1954, Groening saw the first draft of his iconic family make it to the big screen in 1989, a part of The Second Animation Celebration.

Friday, July 28, 1989
THE SECOND ANIMATION CELEBRATION: THE MOVIE. Anthology feature produced by Terry Thoren. Running time: 105 minutes. Mature entertainment. IT'S THE REAL THING. The Second Animation Celebration is the most electrifying tour of 'Toontown since last year's Who Framed Roger Rabbit.
Unlike our last visit, though, this is no nostalgia trip. Culled from the entrants in the second and third Los Angeles Animation Celebrations [1988 and 1989], producer Terry Thoren's anthology is a state-of-the-art cartoon extravaganza.
Made up of 24 segments, his feature offers items from six countries. There's something here for fanciers of every animation style, including computer, cel, clay and stop motion.
True animation (as opposed to the factory-made advertising art generated for Saturday morning TV) is the movie form closest to pure imagination. There are so many treats in Thoren's collection that it's hard to pick a favourite.
For heart, few films can beat The Marathon (1988), a four-minute silhouette show made in the U.S.S.R. for the 60th anniversary of Mickey Mouse.
For humour, the one-minute Scaredy Cat (U.S.A.; 1988) is a spot-on Disney parody, obviously inspired by Marv Newland's classic Bambi Meets Godzilla (1969).
Political humour underscores the 4½ -minute Propagandance (U.S.A.; 1987), a deft, lively plea for musical tolerance. Nine snappy sight gags follow one after another in Quinoscopio #2 (1987), a six-minute cartoon from Cuba.
Bill Plympton manages to cram 25 Ways to Quit Smoking (U.S.A.; 1988) into five funny minutes, while the film as a whole is punctuated by five separate domestic comedy spots featuring Matt Groening's The Simpsons (U.S.A.; 1988-89).
Umbabarauma (U.K.; 1988), commissioned by David Byrne, offers unsettling, impressionistic accompaniment to music by Brazilian Jorge Ben.
Lazar (U.S.A.; 1987), is 11 minutes of energetic, cheerfully insane story-telling in which a wild-eyed rebel contrives to escape from a walled city.
Adding ever more interesting material to the mix are the computer animators. Though used mostly for ads, computers can be playful, a fact demonstrated by the Pixar Animation Group. Represented by its 1988 Oscar-winner The Tin Toy (U.S.A.), Pixar shows just how much warmth can be added to the cool art of computers.

Afterword: Matt Groening, who celebrates his 61st birthday today (February 15), was an underground comics artist with a sharp appreciation of creator's rights. In 1985, he was enjoying moderate success producing the comic strip Life in Hell, a vehicle for social commentary that he syndicated to the nation's still-robust network of alternative weekly newspapers. It was that year that he got a call from television producer James L. Brooks, who was impressed with Groening's work and wanted to talk to him about developing a series of animated-cartoon shorts to be used as punctuation during a variety show Brooks was putting together for the new Fox network. Concerned about losing his ownership rights to Life in Hell, Groening pitched something completely different to Brooks, a concept based on a dysfunctional family called The Simpsons. Introduced on The Tracy Ullman Show (1987-1989), the 48 short episodes were, of course, the inspiration for the iconic half-hour television series. The Simpsons made their big-screen debut in 1989, when cartoon aggregator Terry Thoren programmed five of The Tracy Ullman Show shorts in The Second Animation Celebration feature. Five months after Thoren's anthology played Vancouver, the stand-alone The Simpsons made its debut on Fox, beginning a record 26-season run (with a 27th season to begin in September, 2015). Groening saw his cartoon family grow into a pop culture phenomenon, and a valuable entertainment industry franchise. No surprise, then, that by the time Thoren's feature was released on videotape — as The Animation Celebration Volume Two — the five Simpsons clips were gone from its program.