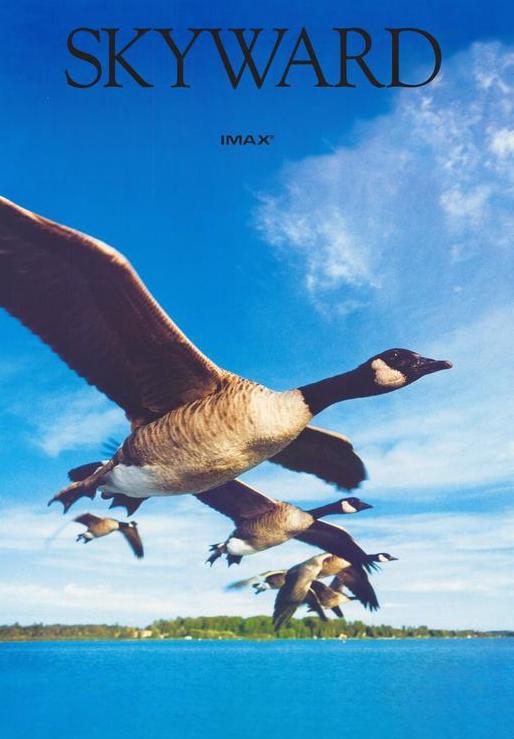 
Japan’s Expo 85 opened on this day (March 17) in 1985 in the Tsukuba Science City north of Tokyo. Among the treats available to visitors at the pavilion operated by brewery and distillery-owning Suntory Holdings were screenings of IMAX director Stephen Low’s celebration of avian flight, Skyward.

SKYWARD. Music by Eldon Rathburn. Written and directed by Stephen Low. Running time: 24 minutes. General entertainment with no B.C. Classifier’s warning. THE FEATURED ATTRACTION IS Grand Canyon - The Hidden Secrets. An IMAX-format look at the U.S. southwestern geological wonder, it is currently [1988] on view at Canada Place's CN Theatre.
The surprise is Skyward. Though it has the supporting position on the bill, it’s no second feature. Technically more sophisticated, and artistically more satisfying, it's the better fiIm.
Commissioned by Japan's Suntory Ltd. for its Expo 85 pavilion, Skyward is about birds. Made by Canadians, its focus is on the work of Florida conservationists, and their efforts on behalf of a family of Canada geese.
And, yes, there's a touch of parochialism here. Portions of Skyward were shot in Comox, British Columbia.
I was delighted to see not just local landscapes (beneath the soaring Royal Canadian Air Force Snowbirds aerobatic team), but local legends on that big IMAX screen. Filmed against a blazing cedar fire, a Northwest Indian Raven dance is both dramatic and intensely spiritual.
As written by Stephen Low (the son of Colin Low, an IMAX pioneer and director of its 1986 3D film Transitions), Skyward is a genuine technical achievement. Among its most breathtaking moments are scenes in which the camera joins the geese in flight.
Subtly enhancing the effect is the fact that the shots are in slow motion, the first time that the huge IMAX equipment has been able to produce this particular visual trick (one that required the film to shoot through the camera at a breathtaking 45 frames per second).
A family entertainment with an unforced environmental message, Skyward is a magnificent 24-minute flight.

Afterword: Japan’s International Exposition (also known as “The International Science Technology Exposition”) was one of two events to call itself “Expo 85.” The other, held in November in Plovdiv, Bulgaria, took as its theme “The creations of young inventors.” Using the word “expo” to name an internationally sanctioned World’s Fair came into common use in 1967, when Montreal was the venue for the hugely influential Expo 67.
IMAX, of course, is a product of Canada's first Expo. The big screen film format was developed by Graeme Ferguson, Robert Kerr and Roman Kroitor, a team that came together at Canada's National Film Board. As a group, they worked on In the Labyrinth, the NFB's multi-screen Expo 67 attraction, a film production co-directed by Kroitor and Colin Low. The format we know today as IMAX was first demonstrated at Osaka's Expo 70. Low's NFB colleague Donald Brittain directed a 17-minute “travelogue of the human spirit” called Tiger Child, produced for the Fuji Group pavilion. It was at another world’s fair, Vancouver’s Expo 86, that audiences first experienced 3D IMAX. As noted in the above review, Transitions was directed by Stephen Low’s father Colin.